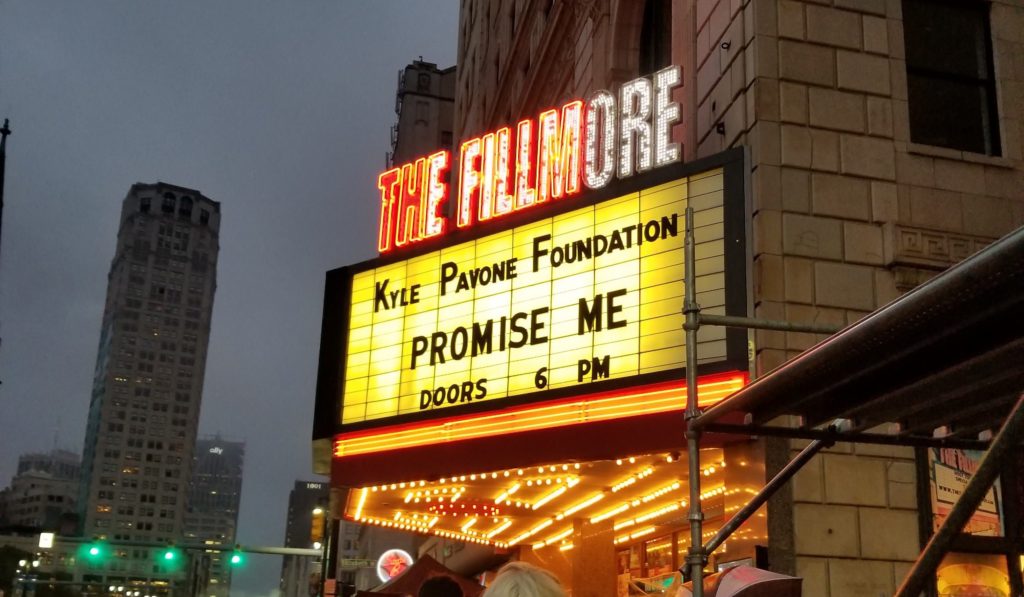 When Kyle Pavone tragically died at 28 while at the height of his career last August due to an accidental overdose, his family immediately opened up an organization in his name that is backed by his bandmates in We Came As Romans. They are continuing with their band in remembrance of Pavone. The Kyle Pavone Foundation’s motto is “the opposite of addiction is connection,” and they are living that out by using Pavone’s death as a way to connect to other musicians who are struggling in similar ways. They believe that no one should struggle with mental health issues alone, and the foundation’s goal is to help other musicians who are struggling with addiction. Metal music is often characterized by screaming, moshing and throwing up your devil horns. Due to this, many people believe that metal music is just “noise” and that it should not be considered real music. This stigma is what ultimately turns many people away from a music genre full of amazingly talented artists. Big events, such as Warped Tour, Self-Help Fest and Knotfest have made strides toward normalizing this musical genre, but no matter what, judgement is cast upon it left and right. Many frequent metal listeners love that the music lets them release emotions. The music is generally powerful, intense, and energetic, which causes many people to admit to it actually improving their emotional state, allowing them to process their anger in a healthy way. On top of allowing someone to get out their anger by listening, moshing and head banging at shows can be a good way to release those negative emotions. In addition, metal fans are also a tight-knit group of people who are always wanting to connect and support each other.

Most do not understand how strong the sense of community surrounding metal music actually is. Being respectful, unique and confident are all characteristics of metal fans. According to Sara Riggby, the listeners are also very safe—there is a well-defined etiquette for mosh pits. Neuroscience News reports that fans of metal music are also generally more open to new experiences, much more adjusted to society and often have more positive emotions than non-listeners, and at metal shows, it becomes obvious how much fans care for each other. Every time someone falls down, the other people in the pit make sure to stop and pick them up.

This sense of community is paying off as, according to a 2019 Loudwire report, “heavy metal was the fastest growing genre in the world in 2018.” Specifically, according to the independent music distribution service TuneCore, there was a 154% increase in listeners.

Michigan State student Jake Janowitz, who plays guitar in the band Rocco Verace, weighs in from a musician’s perspective. He explains that metal is “just another genre to [him]” and that he enjoys it because the lyrical content is very different than what you hear in the top 40. In response to the statement that many people believe metal is just noise, he goes on to discuss that metal music is still music. Not only is metal an actual genre, but “it is highly related to classical music due to its complexities.” Janowitz provided an interesting perspective on metal’s increase in listeners, explaining that he believes that “no certain genre of music deserves anything over another,” and that he thinks every type of music has its own sense of community. Janowitz believes that people, in general, should be less concerned about the size or stigma surrounding any sort of community and should embrace whatever they enjoy. He did touch upon the fact that metal music has a lot of subgenres, including the ever-growing subgenre of metalcore, which may be a reason that metal, broadly defined, is on the rise now.

In terms of actually playing, he said the most rewarding part is seeing the reaction of the audience. He loves when the audience has a positive reaction to the music that he and his bandmates play, which makes playing more fun for him. Shows are always more fun when the audience is interacting at a high level and the musicians have high energy, and the genre doesn’t necessarily impact whether or not the crowd has fun. The atmosphere and energy of the musicians are most important in getting music to resonate with the audience.

Metal music and the musicians who play it are very aware of the stigma that follows around their genre. With recent deaths, such as Chester Bennington, lead singer of Linkin Park, and Kyle Pavone, vocalist for We Came as Romans, there is an increase in attention being brought onto mental health issues surrounding metal music. While many studies have tied listening to metal music to releasing negative emotions rather than generating them, it is hard to show the general population how great metal is due to its outside appearance. Along with the Kyle Pavone Foundation, another project that’s bringing awareness to mental health issues within the metal genre is the Songs That Saved my Life albums. The first album was released in 2018, and a second edition is set for release on Nov. 11th. These albums are full of covers of songs that musicians feel had a great, positive impact on their lives. This way, musicians can not only easily admit that they’ve all been through bad situations too, but uncover the songs that allowed them to get through their rough times. All of the bands included on the albums volunteer to record a song that will go toward helping fund Crisis Text Line, Hope For the Day, The Trevor Project, and To Write Love On Her Arms. With big-name metal and punk bands such as Neck Deep, Dance Gavin Dance, Taking Back Saturday, and Oceans Ate Alaska, and well-known songs being covered, such as “Let it Be,” “Such Great Heights,” and “Semi-Charmed Life,” this album is reaching millions of plays on Spotify and making an impact for these organizations and the stigma surrounding metal music.

In this day and age, it’s important to look past first impressions and truly understand something for what it is. The metal genre has been misunderstood for a long time. Newer bands want to put an end to this stigma and prove that they are able to make a difference in the world by taking part in projects that support the awareness of mental health issues and connect people who are struggling with resources that can help.

If you or someone you know is dealing with mental health issues, there are resources that can be utilized, including the organizations mentioned above as well as hotlines that can be called 24/7. To get in contact with the National Helpline, simply call 1-800-662- HELP (4357). Always remember that there are people in your life who care about you and want to support you. Ending your life is never the answer.

Kristina Osterman is a senior pursuing a double major in Professional Writing and Communication. She wants to eventually become a fantasy and realistic fiction author, but is currently aspiring to work in public relations. When she’s not focusing on her career, you can find her dancing, knitting, embroidering, or reading. She is a member of Orchesis Dance Company, an intern at the CREATE for STEM Institute, and a Peer Assistant at the Engagement Centers here at MSU.