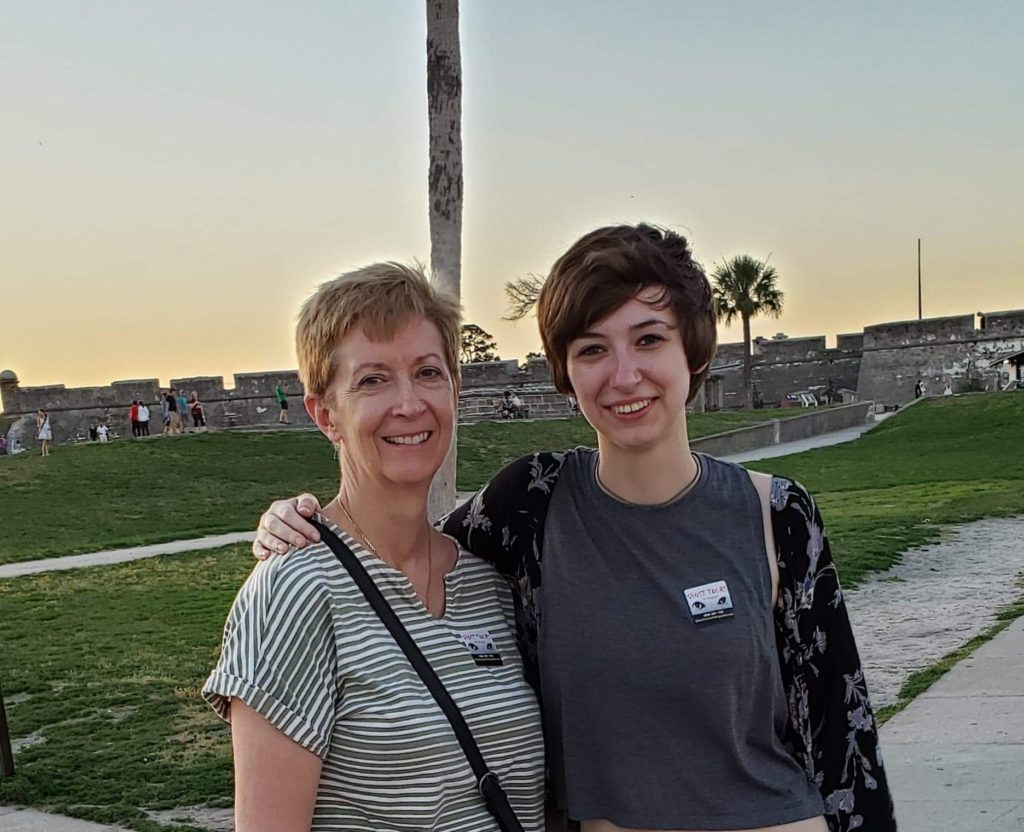 A mother-daughter duo are taking self-defense training to the next level.

At the age of 13, Frankie Potochick, now a senior at Michigan State University, found her passion: self-defense. Her mother, Karen, had been practicing martial arts for a lifetime, a passion that led her to begin teaching self-defense. Frankie Potochick was familiar with dinner table chatter and mother-like recommendations on staying safe and protecting yourself, but it wasn’t until she sat in on one of her mother’s self-defense classes that this passion really took hold in her own life. She was a middle-schooler at East Middle School in Farmington Hills, and her mother was invited to instruct her and her peers on the importance of self-defense. Since that day, the teachings became that of both Frankie and Karen Potochick, a mother-daughter team dedicated to informing and educating the public in the realm of self-defense.

Potochick had long been sitting in on the lecture of self-defense from her mother, and came into the family business with knowledge far beyond that of your typical teenager. The two teach classes for all ages and genders with a primary focus on women and girls. Wherever they are called to teach, they go, recognizing the importance of ensuring each and every individual is receiving this information—information that could save their life.

“[Self-defense training] is worth everyone’s time, male or female, because these crimes can happen to anyone,” said Frankie Potochick. “No one ever thinks it’s going to happen to them. But any person on the street can be the victim of these crimes…even if they think that they don’t need to know this information, they do.”

Why is self-defense training so important? Statistics don’t lie. In the case of an assault, Frankie Potochick said if the woman does nothing to fight back, she is going to get raped 93% of the time. If she uses non-forceful verbal resistance, a statement such as, ‘Please don’t hurt me,’ 95% she is going to get raped. If she uses forceful verbal resistance, however, which is yelling, screaming and drawing attention to what’s happening, that number drops down to 50%. If she fights back physically, the number continues to spiral down to 40%. Knowing even the most basic, general defense tactics and having the confidence to use them cuts the number of being assaulted by a perpetrator in half.

Potochick and her mother teach skills that are simple and easy to remember; things that attendees can practice on their own with ease once the session is over. Potochick said that when you are in a stressful situation, you are going to react with moves you know best and things you’ve done the most. If you aren’t practicing these skills, you are likely to react by freezing. So, Potochick teaches general things including “protecting your head” and fighting back by aiming for large target areas, such as the knees. More than anything, though, Potochick says the biggest thing you can take away from a self-defense course is confidence.

“It gives me more confidence to know that if something were to go wrong that I know what to do in that situation, and having confidence is half the battle,” said Potochick. “When someone is choosing a victim for a crime, they’re going to choose someone who looks weak, who’s looking down at their phone, who’s slumped over. If you’re confident, if you walk like you have confidence, people are less likely to choose you. They’re going to choose an easier target.”

In each course they teach, the Potochicks share their five self-defense rules, rules that they say everyone has been taught before they head off to kindergarten.

This is a rule that parents have been pushing for generations. In this day and age, Potochick says this rule more so translates to being aware of what you’re posting online.

In this digital age, information is easily accessible, especially if you make it so. Lessening the content you are sharing online will protect you from strangers posing as Facebook friends and Twitter followers.

Look both ways before you cross the street.

“Aside from ‘don’t get hit by a Cata bus,’ just be aware of your surroundings,” said Potochick.

Karen Potochick’s blog sharing the five rules of self-defense rules asks readers: Have you ever bumped into something, or someone while texting? Have you ever come out of a mall, concert or amusement park and forgotten where you parked your car? Have you ever gotten home and not been able to remember how you got there?

Likely, you can answer yes to one if not all of these questions, which Karen defines as a state of “semi-consciousness”. If we are not paying attention to our surroundings, we may miss a potential threat in the parking spot next to our car or on the walk home from class.

Let someone know where you are at all times.

“My uncle’s sister, when she was 21, went to the mall and didn’t tell anyone where she was going,” said Frankie Potochick. “She was coming outside, it was late at night, and she was…looking in her purse for her keys. A man with a gun was next to her before she knew he was there, and he told her to ‘get in the car.’”

Frankie Potochick explained that this relative was taken to a secondary location where she was sexually assaulted and raped for hours. Frankie Potochick also shared that, statistically, if you go from a primary crime scene to a secondary crime scene, your chances of being a victim of a homicide are 94%. Her uncle’s sister beat the odds and was released after enduring this assault, but her whole life was thrown completely upside down, and years later the damage still remains.

“Her brother, my uncle, was a police officer. He could have had the entire police force out looking for her, but no one knew she was missing because she didn’t tell anyone where she was going,” said Frankie Potochick, further proving the importance of always keeping someone informed of your whereabouts.

If you don’t have anything nice to say, don’t say anything at all.

“This is the hardest rule not to break,” said Frankie Potochick. “You have to be careful, especially because you never know what other people know. You don’t know what their situation is. You don’t know if that guy you flipped off on the road just came back from murdering a family of five, and maybe you just pissed him off and he’s going to follow you home. So you just have to be really careful and really cognizant of people and their situations. You never want to push someone over the edge.”

“At our age it’s more, ‘don’t take drinks from strangers.’ Keep track of your drink. Don’t set it down anywhere,” said Frankie Potochick.

Frankie Potochick shares that gut instinct is accurate 99% of the time. If you have a gut feeling that something is wrong, you should follow it.

These five rules are instructions people have heard from a young age, but their translations still remain true today. The Potochicks are reinforcing these age-old decrees in each class they teach by painting them in a new, modern light.

In one of Frankie Potochick’s classes at MSU, she is learning about grant-writing and funding. With the help of this course material, Frankie Potochick ideated a plan for the future of her and her mother’s self-defense training, and is now in the midst of working on a grant proposal for self-defense pop-up shops. Frankie Potochick hopes to use these grant dollars to travel to different cities across the country, particularly those with high rates of violent crime against women, and implement pop-up shops where she will teach self-defense classes and train additional instructors. This plan aligns with her mission to ensure everyone is being educated in self-defense, arming the public with the tools and knowledge to protect themselves.

This hopeful eye toward the future isn’t just Frankie’s future, though. It is one that includes the dedicated mother-daughter duo, allowing Frankie Potochick to continue working alongside and learning from her mother.

“[My mom’s] been doing this for a really long time, so she’s a really good teacher,” said Frankie Potochick. “I learn something new every time I go through this class. I’ve gone through it a thousand times, and every time a new question gets asked and I have more information that I can pass on.”

And with more information comes a sounder educational springboard for people to utilize should they find themselves in situations where they must fight back. Frankie Potochick finds it rewarding to know that the skills she is teaching and the tactics she is pushing might be the thing that saves a potential victim from their attacker.

“We try to give women the tools to be the heroes of their own stories and to be the ones defending themselves,” said Frankie Potochick.

As Frankie Potochick and her mother look to the future, they continue to relish in the opportunity of helping women hold the pen in their story. A story that doesn’t have to end with an unexpected attack. With each word spoken and each defense move shown, the Potochicks are changing mindsets and inspiring women to fight back, be strong and be bold.

“The thought that maybe because of me, there’s one less girl who is going to have a story like this, that’s the reason that I keep doing it. If even one person gets out of a terrible situation because of [something I taught them], then I consider my life a success—I have done it,” said Frankie Potochick.

Sydney Naseef is a journalism major and public relations minor in the Honors College at Michigan State University graduating in 2020. She is working as a student practitioner at Martin Waymire, an award-winning PR firm in Lansing, Michigan. When Sydney isn’t at work or in class, she likes to spend her time writing, taking photos or exploring her new love for graphic design—all while listening to The 1975, of course.