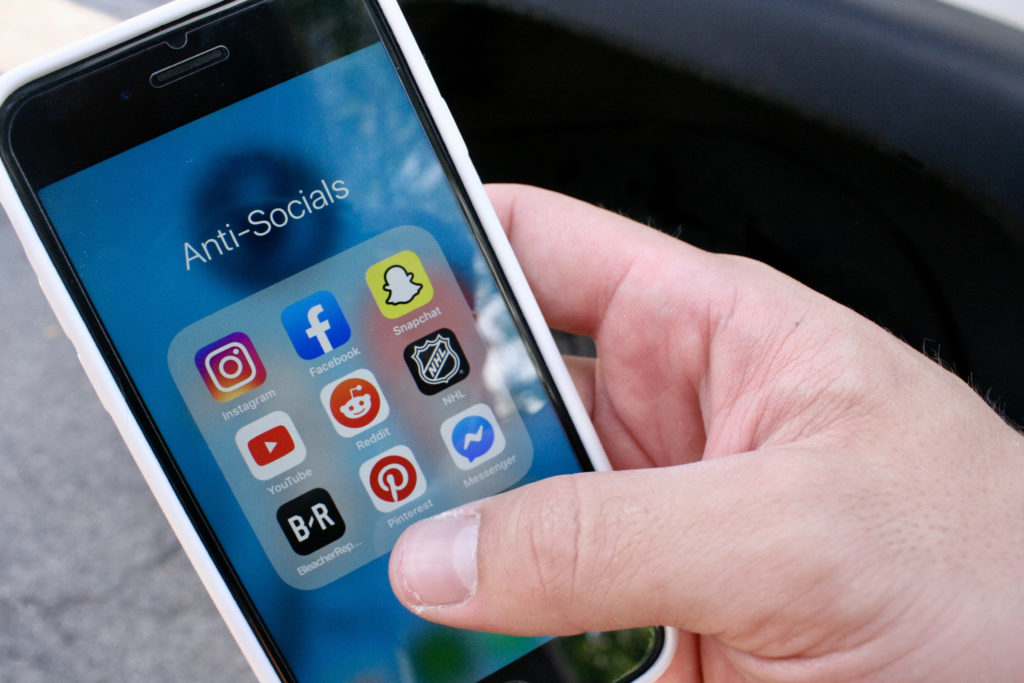 “We can see that there is a problem and that there’s an overuse and that it’s draining our mental health, but we don’t quite know how to combat that yet or reverse the effects.”

You’ve finally shut your eyes, turned off your television, closed your computer and rested your head on your pillow. You’re beginning to doze off when suddenly your phone screen illuminates your dim bedroom. Through half-mast eyelids, you see a notification from Instagram. Groggily, you slide it open to find that your post from this afternoon got another like. Good, you think. It wasn’t doing too hot. The minutes tick by, turning into hours as you swipe further into the abyss of Photoshopped torsos and whitened smiles, photos displaying your followers’ highlight reel. You’ve scanned through photo after photo, making comparison after comparison. How does she get so many likes? Why didn’t they comment on my post? Next thing you know, it’s 3 a.m., and the past three hours have been wasted on mindless scrolling and unhealthy thoughts.

This is a typical night at home for many teens and young adults. There has always been this idea of a social hierarchy in our life, our schools, our jobs, etc., but now social status is ranked by the number of likes and comments we’re receiving on any given platform rather than by what’s happening in the physical world. We are making absurd financial decisions solely based on improving our digital image; people are buying social media bots to increase their follower count or achieve more likes per post. Individuals are purchasing apps to edit their appearance and color their photo with the perfect filter. Small-scale studies have been done, and scientists and journalists alike have written myriad research articles analyzing one simple thought: your biggest enemy is likely your cell phone.

At Michigan State University, one student is actively working to gather information on this social phenomenon and its effects. Carolyn Forrest, a junior studying neuroscience at MSU, works as a research assistant for the Social Media and Neuroscience Lab on campus. Forrest and her team are, in overarching terms, studying the effects of social media on young people, spanning from middle school to college-aged students. Forrest began her work by investigating the ways social media affects our general behavior. Now, she is in the beginning stages of researching how we perceive our own social media use. In other words, do we perceive our social media usage to be an issue? And at what point does our use become too much?

“From what I can tell so far, we perceive ourselves to be very obsessed with this culture of information sharing,” said Forrest. “It’s a problem that we can acknowledge, but we can’t solve the problem. So, we can see that there is a problem and that there’s an overuse and that it’s draining our mental health, but we don’t quite know how to combat that yet or reverse the effects.”

According to Fox News, getting an alert triggers your brain’s reward system, releasing dopamine. This means we are literally becoming addicted to social media notifications in the same way that drug users become addicted to substances. The article states that even Facebook has acknowledged that using its services can potentially be “detrimental to one’s long-term health,” with former Facebook employees calling out the company for these damages.

And this isn’t the first time that comparison has been made. A 2014 study from the University of Southern California concluded that simply scrolling through your social feed triggers similar feelings to that of gambling and substance use. Whether it’s unexpected notifications or a conscious decision to unlock your phone and start swiping, both offer similar euphoric feelings that are addictive in nature.

Forrest has noticed the way social media is taking a toll on her own mental health and stability. She says the standard of perfection that comes with platforms like Instagram and Facebook lead young people to question their worth. Social influencers are chosen for their number of followers, acting as a marketing tactic for companies because their account has a strong audience. Models and actors are filling our feeds with a life we can’t afford and looks we can’t achieve. Being constantly bombarded by images of the perfect body, the perfect life, the perfect relationship, etc., Forrest and many others are left wondering if they measure up.

“That’s kind of where the problem stems from,” Forrest says. “We see perfection so we want to be perfection, and that’s where we get into that trap of anxiety, depression and related mental illnesses of ‘I have to be perfect, but I’m not perfect and I don’t know how to achieve that.’ So that’s where your mental health just drops.”

So then the question becomes: what can we do about it? We’ve already been introduced to social media, and as the digital world progresses, children are being affected at younger and younger ages. Seeing a 5-year-old who knows their way around an iPhone should shock us, but it doesn’t. In our current society, it has now become a question of how we can make these platforms safer and more fulfilling to use.

This is why social media platforms across the board are considering new tactics to improve users’ mental health. Facebook and Instagram are testing the waters with like count removal, hiding the number of total post likes.

“I noticed in high school that I was putting a ton of pressure on myself to get a certain number of likes on my Instagram posts, so I ended up turning off my notifications so that I wouldn’t be constantly checking in,” said Lauren Layden, a senior at Michigan State University. “It’s been about 5 years, and I have yet to turn them back on. It has definitely helped me, so I think the move to do that on the social channel as a whole is pretty smart.”

Despite the good that removing notifications and likes has brought to Layden, and the good it could bring in a more widespread effort to improve mental health conditions in users, Forrest still believes that the overall issue of this targeted, global comparison is the most crucial piece in changing this dismal digital narrative.

A study from York University in Canada took this idea and put it to the test. The study analyzed 118 female undergraduate students and asked them to interact either with a post of someone whom they perceived as more attractive, or a family member. The results proved that those who browsed images of a “more attractive” individual were more dissatisfied with their bodies. “This is the first study showing actively engaging with attractive peers’ social media causes worsened body image in young adult women,” stated study authors Jennifer Mills and Jacqueline Hogue.

When it comes to social media and the way we use it, there are a multitude of moving parts that have brought us to this current state of at-risk mental health. The addictive nature of the platforms and the high standards they set are plaguing the millennial nation and the next generation with difficulties others didn’t have to endure. Moving forward, it’s unclear how to best navigate through and out of this negativity, but platforms are taking steps toward more inclusive and private conduct in an effort to reduce these effects.

Sydney Naseef is a journalism major and public relations minor in the Honors College at Michigan State University graduating in 2020. She is working as a student practitioner at Martin Waymire, an award-winning PR firm in Lansing, Michigan. When Sydney isn’t at work or in class, she likes to spend her time writing, taking photos or exploring her new love for graphic design – all while listening to The 1975, of course.