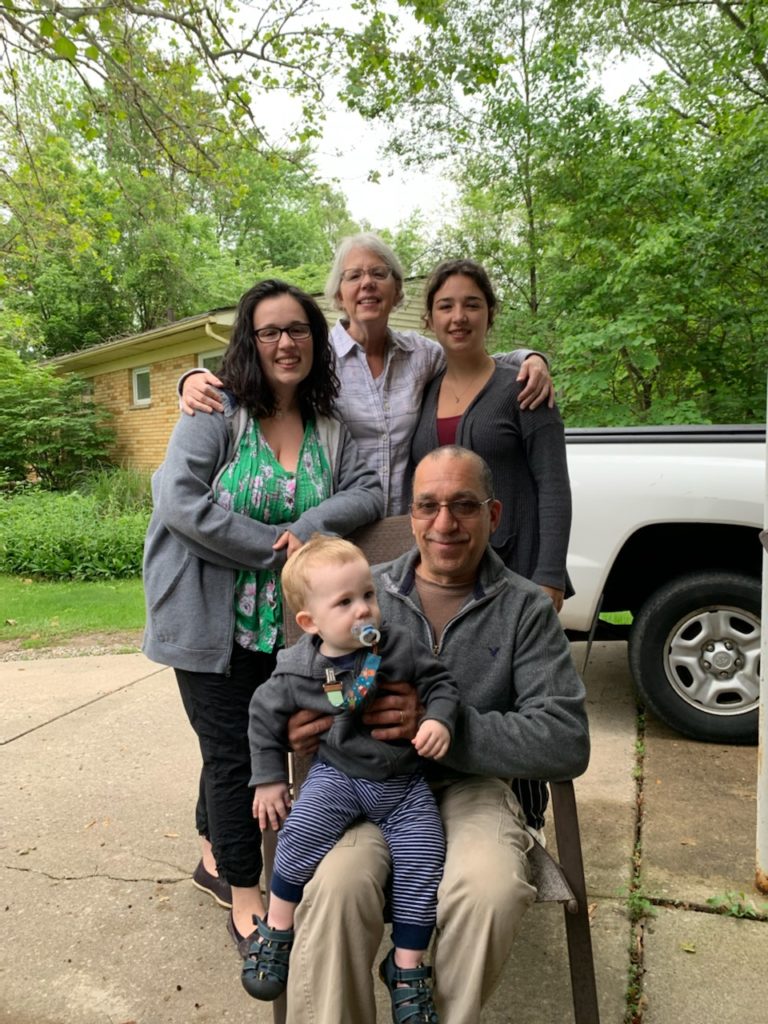 Growing up, I knew my parents were different than most. At family gatherings, we were the ones who didn’t bow our heads in prayer. We never had meat for meals, my mother would pick up litter any time she could and my sister and I would always brag about not having to get shots at doctor appointments. We didn’t know it at the time, but our parents were certifiable, tree-hugging hippies. I now know I can credit my compassion, tolerance, environmental consciousness and left-leaning political views to my parents.

The first thing setting my parents apart from others in my mostly white school district was the fact that my parents have an interracial marriage. My sister and I are white-passing, so much so that several people thought our Puerto Rican father was actually our step-father. In the 2004 election, even though we couldn’t vote, we would bristle at the Bush/Cheney signs on people’s lawns, and even get into political arguments at school. My sister, Elena Carter, who is a senior in the James Madison College, recalls getting into a fight with a classmate in first grade.

“I remember getting into a heated argument with another student when I was six or seven, about the US involvement in Iraq. My position was that Bush had gotten us into war for oil money, something I overheard my parents saying,” says Carter.

When it came to controversial “hot” topics, our parents never shied away from taking the opportunity to educate us.

“I remember one day we were in the car, and mom was talking about her friend, Michelle, getting married to another woman. I was probably in third grade at this point and I had been influenced by some kids in my class. I thought it was strange and unnatural, but my mother calmly explained that love is love and that I needed to respect other peoples’ lives.”

As an adult, when my friends and classmates lament about painful family gatherings with conservative parents, my sister and I have nothing to add. At my family gatherings, the political arguments consist of Bernie vs. Elizabeth, we all watch political late-night shows, and my dad gives us stacks of dog-eared New Yorkers insisting we read the articles he picked out for us. For my sister, the best part about having flower children as parents was the ability to form our own beliefs.

“I was able to talk to my parents about politics and religion in a safe environment, and although they were atheist, they never actually tried to push anything on me. I am grateful for this because it allowed me to decide what I believed, as opposed to what they believed, which I think is a very important thing to do when raising children,” said Carter.

While my sister and I are lucky enough to regard our parents as “woke,” we are only a few of the Millennials who can. My oldest friend, Ann (a pseudonym), comes from a family polar opposite of mine: Catholic parents with eight children. Her parents had many religious traditions that were normal to her as a child. These included weekly Mass, youth group, and praying the rosary. When it came to touchy political issues, her parents were a little less tolerant than mine.

“My parents were cool and all, especially compared with other religious parents, but my friends’ parents were a lot easier to get along with and laugh with,” Ann claims.

When it came to those controversial topics, her parents were a little less open-minded.

“My parents are highly disgusted by gay people. They’re the kind of people that think gays should all go to conversion therapy, convert to Catholicism, and be chaste for the rest of their lives.”

Ann and I met in middle school and have been friends ever since. I grew close with her and her family, and even converted to Catholicism, her mother was my confirmation sponsor. Even though my parents disagreed with the teachings of the Catholic church, they still drove me to every mass, youth group, and retreat I asked them to. They even came to my confirmation.  I know that I took that support for granted at the time, not really understanding how difficult it must have been for my parents to support me in choosing a life so different from theirs.

Shortly after I was confirmed, Ann and I began to explore the world outside of Catholicism, forming our own opinions and beliefs. Perhaps fueled by the unexpected and tragic death of our friend’s father, by age 18, Ann was confused, sad and desperate for relief.

“I started doubting my faith while still heavily practicing it, which really sent me through a spiraling depression until I realized that I could just let go of the stress of religion,”Ann says. “I definitely was influenced by the world outside of Catholicism, which was so much more open and freeing and welcoming than what I was used to.”

While my parents were pleased that I left the church, Ann’s parents weren’t so quite supportive. “It’s been seven and a half years since I left religion and my relationship with my parents is rocky, but we all get along now and try not to start anything.”

Even though Ann and I came from different backgrounds, we both found our way to the left leaning viewpoints we currently hold. While of course our parents love us and want the best for us, I feel like the tolerant and pacifistic environment I was raised in made it easier for me to grow into my views compared to those who were raised with strict religious views. For people out there who struggle with their family members that have opposing viewpoints, Ann advises to “only let in the people you know you can trust, because family doesn’t automatically mean trustworthy. It’s okay to not be fully transparent to everyone significant in your life.”