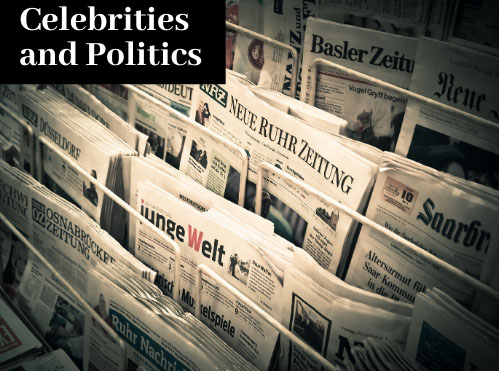 It’s the age-old question that everyone seems to have an opinion on: Should celebrities comment on politics? This question is neither new or different, it’s been asked a thousand times over, and yet people can’t seem to stop talking about it, but why? The answer to this question is oftentimes complicated and long-winded. Then, the natural follow-up to that answer is the next question: Why? It’s the ‘why’ that has kept people talking about this topic for decades.

With the current state of American politics, it seems as though there’s a new story everyday about a celebrity commenting on a political stance, an election, or the President. Social media plays a large role in this narrative. It allows celebrities to interact with their fans with ease and to endorse candidates and political agendas via their phone screens. Of course, there’s also the fact that the President is regularly on social media — typically Twitter — slamming celebrities for various reasons. In 2019, The Hill released an article about Trump and his many feuds with celebrities.

However, the controversy of celebrities commenting on politics is not new. In 2003, the Dixie Chicks experienced intense backlash due to commenting on politics during the Iraq War. According to an article on History, Dixie Chicks singer Natalie Maines said, “Just so you know, we’re on the good side with y’all. We do not want this war, this violence, and we’re ashamed that the President (George W. Bush) of the United States is from Texas.” This led to extreme backlash. Thousands of people called radio stations and asked them not to play the Dixie Chicks’ songs, and many people also boycotted their next album. President Bush said they “shouldn’t have their feelings hurt just because people don’t want to buy their records when they speak out.” But it wasn’t just a drop in record sales due to the voicing of their political opinions — it was death threats and anti-Dixie Chicks groups that sprung up and stuck around for years. While the Dixie Chicks did go on to try and explain their comments and their stance in the press, they never retracted the statement. The backlash from speaking about politics and more is detailed in their 2006 documentary, Dixie Chicks: Shut up and Sing.

In her newly released documentary, Taylor Swift: Miss Americana, Swift cited the Dixie Chicks incident as one of several reasons why she declined to comment on politics for so long. During the 2018 primary elections Swift chose to end her silence regarding politics. It was a big moment for her fanbase as many had wondered whether she was a Democrat or a Republican. In an Instagram post on Oct. 7, 2018 Swift endorsed two Tennessee Democrats, Phil Bredesen for Senate and Jim Cooper for House of Representatives. In the post Swift says, “As much as I have in the past and would like to continue voting for women in office, I cannot support Marsha Blackburn. Her voting record in Congress appalls and terrifies me. She voted against equal pay for women. She voted against the Reauthorization of the Violence Against Women Act … These are not MY Tennessee values.”

Swift disabled comments for the post on Instagram, but that didn’t stop fans from commenting on her Twitter and Facebook posts. Many fans claimed that they would stop supporting Swift because her views did not align with theirs. Other fans supported Swift’s post and said they were relieved she was finally speaking out on politics. The post about her political stance on Instagram made headlines. The announcement was on every major news outlet; some reporters were shocked and said they thought Swift to be a “closeted republican.” Other outlets said that releasing the announcement was a mistake, alienating the country music base and republican fanbase.But Swift held strong, and since that initial Instagram post she has advocated for LGBTQ+ rights, shared the Equality Act Petition, talked about who she votes for, and encouraged her fans to vote in all elections. Swift’s music video for her song “You Need to Calm Down” features and celebrates several people from the LGBTQ+ community and ends by directing people to sign the Equality Act petition. The petition has since gained millions of signatures.

Cooper won the seat in the House of Representatives, but Bredesen lost the Senate race. However, there’s no doubt that Swift speaking out had a real impact. According to BBC News, “In the two days after the star posted her original message … Vote.org received 212,871 new voter registrations across the country, with the most in the 18 to 24 age group.” It was also noted in the article that throughout October of 2016, an average of 13,000 people were registering to vote per day. While she did receive backlash for commenting on politics Swift’s seventh studio album, “Lover” was released in 2020 and debuted at No. 1 on the Billboard 200 album chart, it was the biggest sales week since her previous album “Reputation” was released in 2017.

In 2018, The Hill conducted a survey wherein they found that a majority of Americans say they “oppose celebrities giving political endorsements.” The survey found that 60 percent said celebrity endorsements “polarize public opinion and distract from the important issues of the day.” The other 40 percent said that they support celebrity endorsements because “they spread awareness and encourage people to vote.” Oftentimes, people online will say that celebrities or the so-called “Hollywood elite” should stay out of politics because they’re rich and don’t have the same problems or struggles as the majority of Americans.

So, should celebrities comment on politics? It seems as though it comes with a lot of backlash and possibly a late-night hate-tweet from the President. But it can also lead to higher voter registration, more awareness for issues such as the Equality Act and could lead to more respect from the celebrity’s fanbase. The important answer to ‘why’ for those who believe celebrities should be able to comment on politics and endorse candidates is that at the end of the day, America is a democracy which includes freedom of speech and everyone should be afforded that right. However, should people blindly follow their favorite celebrity’s ways and vote for who they endorse? No. As voters, we have a duty to inform ourselves on the candidates and vote for whom we believe will do the job best. The beauty of democracy is the fact that we have choices and those choices should be afforded to everyone. What do you think? Should celebrities comment on politics?

Sara Gilson is a senior studying Professional Writing with a focus on editing. After graduation she hopes to work for a publishing house. When she’s not in class, Sara can be found at work copyediting for The State News. In her limited free time Sara enjoys reading young adult books, spending time with her cat and watching the latest movies. You can follow her on Twitter @saragilson13