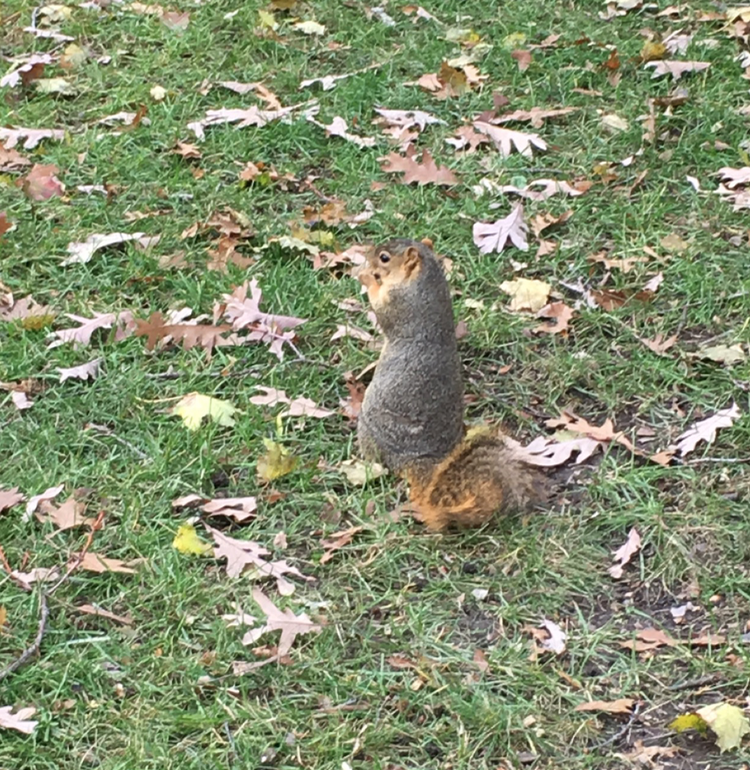 Silliness permeates the college experience in almost infinite ways, though there are only a few ways that can actually be described in words. One of these almost universal experiences is in what we will be describing as college squirrel culture.

My first encounter with a college squirrel was during one of my first weeks at MSU. In North Neighborhood, I walked past the music building to get to my dorm on West Circle. Suddenly, something ran out in front of me: a squirrel! This was not like any squirrel I had encountered before though, this one scurried even closer when I approached. Over the next few weeks, I realized when I was walking around that this squirrel lived in front of my dorm, Yakeley hall. My friends and I aptly named her Yakeley squirrel (we assume she is a girl because Yakeley is a women’s dorm). She appeared on our Snapchats throughout the year, and we saw her doing various squirrel activities, mostly scampering around the dorm courtyard, or finding, eating and  burying nuts, but also doing what college squirrels do best: getting really close to people.

This year, my fascination with squirrels grew. I realized that they really like me in particular. My friends theorized that this is due to my kind of high pitched voice, and that the squirrels may be particularly drawn to or maybe more easily inclined to hear things at this register. Either way, one “hello!” from me instantly causes all squirrels in the vicinity to perk up their little ears and approach.

One interesting phenomenon with squirrels, especially on college campuses, is how quickly the squirrels seem to increase in size as the fall semester progresses. During move-in time and the beginning of fall classes, they are a little skinny-looking. Around midterms and into November though, the squirrels seem to balloon exponentially. One article, titled “Squirrels Are Getting Seriously Tubby From The Warm Winter Weather” discusses this phenomenon. In it, author Tom Hale writes, “Squirrels don’t hibernate, so to survive the (usually) harsh winter, they gorge on food towards the end of the year to build up fat reserves. This process can lead to squirrels putting on almost a quarter of their body weight in fat.” This article describes possible climate change connections to squirrels’ body weight, saying “the exceptionally mild winter in many areas of the world has led to squirrels across Europe and North America piling on the pounds. The freakishly warm weather has meant trees still have an abundant banquet of nuts and seeds, which the squirrels have been taking full advantage of.” This school year has also had a relatively mild winter, and from just casual observation, the squirrels seem to be having a similar pattern of horizontal growth this year as well.

One of the best things about college squirrel culture is that it is universal. The Huffpost article “The Colleges Most Obsessed With Squirrels” by Tyler Kingkade details over forty college student body’s relationship with squirrels:

“Vandy [Vanderbilt University] has its own squirrel newscast, a ‘Squirrelcast.’”

“The students at Rice University note that their squirrels are ‘pretty fat.’”

Importantly, the article also shares some not-so-warm-and-fuzzy squirrel anecdotes: “Northwestern students constantly worry about the small mammals jumping on their bike seats and other ‘squirrel-on-human aggression,’” the Daily Northwestern reports.

This shows that these (mostly benevolent) rodents are an essential part of the college experience.

Squirrels even infiltrate college rivalries. One Reddit user incites a row on the online platform with these fighting words: “MSU squirrels can kick UofM squirrels’ a**es!” MSU junior, John C. says, though: “UofM squirrels deserve some credit for being so huge. They are like bowling balls on the side of the sidewalks.”

It is impossible to talk about squirrel culture without discussing the controversy of to-feed-or-not-to-feed the squirrels. The HowStuffWorks article “The Great Squirrel Feeding Debate” says that feeding squirrels can be detrimental to their health because “human food just isn’t good for wild animals, and they can survive just fine on their own. Wild animals have specialized diets, and they can become malnourished or die if fed the wrong foods.” The article also says that feeding squirrels can make them dependant on humans for food. They did not comment, however, on the almost constant flow of food that squirrels who live on college campuses receive. With this knowledge in mind, and if you can’t resist feeding the squirrels, try to replicate the foods they might find in the wild, like nuts or vegetables, and avoid processed foods and carbs. That squirrel’s stomach was not built for caf cookies!

In conclusion, squirrels are a special part of the college experience, and an often overlooked opportunity for friendship. Find your neighborhood squirrel today!