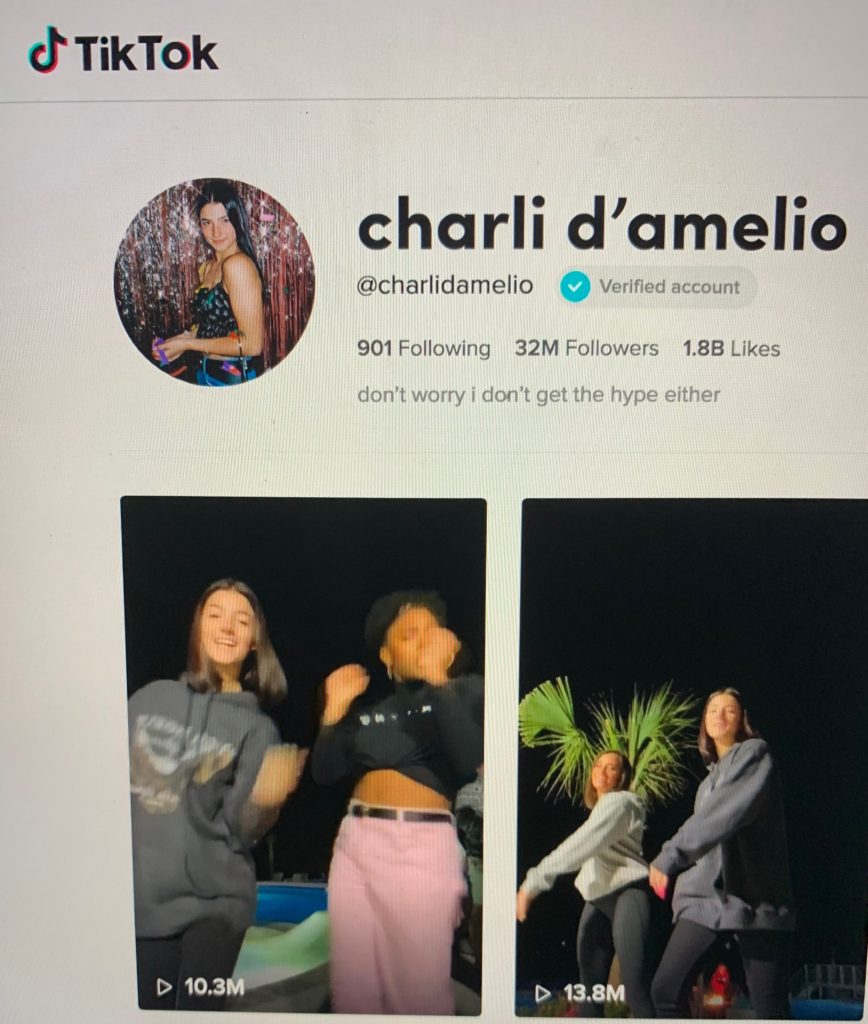 Although this may sound similar to the title of a Ke$ha song from 2009, TikTok is also an app that’s influence seems to be spreading all across the world. The TikTok app allows anyone that joins the community to create, share and upload videos. This new social media platform has made way for content creators to upload videos of themselves doing things such as recreating popular dance trends, producing short comedic skits or DIY tutorials. The app’s home screen, called the “for you page,” allows users to view the newest and most popular videos being uploaded.

TikTok is currently in the top four most used and downloaded social media platforms. Ranking from Facebook as the most popular, then YouTube, Instagram and now TikTok, which has surpassed Tumblr — another social media platform that  previously held this fourth-place position. Due to the app’s high popularity, it has created a stream of new users and can be seen as one of the fastest-growing social media platforms. The publication Oberlo shares how Gen Z’s are adapting to this new subculture amongst their own peers and people older or younger than them.

As TikTok’s popularity began to soar, it started a domino effect that led to a massive influence on pop culture. Famous songs from the app are now played on the radio, and you can even see people doing the dances to these songs as they are driving, walking to class or out at the bar. The creators of the songs are gaining more clout than ever before due to this app. For example, Doja Cat has exploded and has even included the “Say So” TikTok dance in her new music video for the song. Due to the popularity of this app, it has become famous in other countries besides the United States. This Includes India, Turkey, Russia, Mexico, Brazil, Pakistan, France and Germany to name a handfull.

More than just dancing takes place on TikTok. For example, audio is used for lip-syncing and reenacting. I have started to notice that people are now communicating with one another just by using someone’s one-liners from different TikTok audios. An example of one of these famous audios is “don’t look at me like that. You amaze me.” Even recreating facial expressions or body language can reveal a video being referenced. For example, the audio called Bagaikan Langit (cover) by Nhece, starts with “five, four, three, two, one” and is then followed by different facial expressions to the beat of the song. TikTok seems to have taken on a greater influence than ever imagined and the majority of these new trends are due to young teenagers being creative and goofing around with friends. Many people download TikTok as a joke because the majority of users happen to be teenagers, but then see the creativity in the app, which is how the influence spread.

Due to the amount of teenagers who are minors on this app, there has been a rise in concern regarding the app’s safety. Forty-one percent of users on the app are between the ages of 16-24. It is no secret that the target market for the app was mainly users under the age of 18. This can be seen with the constant rise in popularity of the ultimate TikTok star, 15-year-old Charli D’Amelio. With 30 million followers and counting, TikTok has made Charli into a teen celebrity, granting her the opportunity to partake in exclusive events such as the Prada Fashion Show, NBA performances and the 2020 Super Bowl halftime show. Eyes are constantly on this young teen, and it’s all because of her dancing videos that she has decided to share with the world.

Charli’s most famous dance is called the Renegade. This dance, although widely-known through Charli, was actually made by someone else. Charli copied the dance off of someone else who has nowhere near the amount of followers that Charli has now obtained. Charli has reached celebrity-level popularity on this app and gets millions of views just from looking at her camera and pressing record. She began posting “thank you” videos to celebrate how many followers she now has. For example, when she celebrated 28 million followers, she had already obtained over 29 million a week later.

Charli is not the only teen who has risen to fame from the power of TikTok. Others, such as Addison Rae, Bryce Hall, Taylor Holder, Josh Richards and even Tony Lopez have benefited with great amounts of clout. This all came from what is known as the Hype House, a mansion located in a gated community where famous TikTokers film their videos and live together. Although this became a way to collaborate and create content with one another, the rise in fame has caused problems for some of these young adults. For example, privacy seems to be no longer for Tony Lopez, who had his nudes leaked at the age of 20.

The fame that follows these TikTok stars now has kids as young as ten using the app, wanting to act just like them. These new stars are now influencing younger generations and they are paying attention to every detail. Good or bad, young fans seem not to care what the consequences could be for their future when uploading content.

This app has created a platform for individuals to express themselves and create an image that can attract large followings. Whether it’s dancing, singing, or acting, this app has helped start careers for people from teenagers to adults. Connecting with those around the world has been inevitable with technological advances, but now TikTok has created a cultural mesh where those of different languages can still communicate with one another through different kinds of dances, body language and audios. The introduction of this new app to the list of most popular and frequently-used apps — Twitter, Instagram and Snapchat — has played a role in its rise to popularity. The availability of a new social media platform provides more room for growth amongst digital spaces, and for TikTok itself.

Jaclyn Krizanic is a junior studying Professional Writing and minoring in Graphic Design. Jaclyn plans to apply her knowledge and skill sets she has gained from her major into her current, future and professional work. Jaclyn loves to write poetry and inspires to publish a book of poems and short stories upon her graduation.