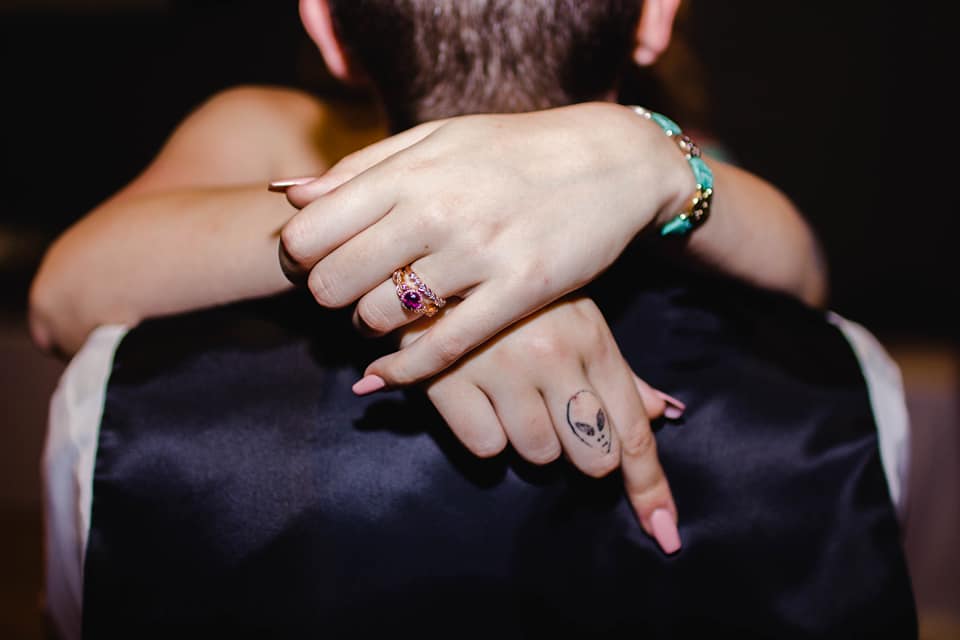 The word “polyamorous” first appeared in a 1990 Green Egg Magazine article entitled “A Bouquet of Lovers.” Author Morning Glory Zell defined polyamory (sometimes shortened to polyam) as “consensual, ethical and responsible non-monogamy.” Although stigma still remains with anything outside of what is considered “normal,” within the Millennial and Gen Z generations, names and labels for different sexual expressions, identities and relationships have become increasingly mainstream.

Due to this more accepting culture, there is more of an embrace for people who have identities and relationships existing outside what is considered traditional, including Grand Rapids native Dani Kleff. Kleff had always felt there was something wrong with them for desiring multiple romantic and sexual relationships. When they discovered polyamory, it made them feel like they could finally be true to every part of themselves.

Kleff brought up the idea of being polyamorous with their partner when they were still engaged. The couple sat on the idea for almost a year, discussing boundaries and expectations, and finally gave it a go six months after they married.

“It was an absolute roller coaster at first,” says Kleff. “The ability to text my husband and say, ‘Hey, I am going to the bar with X, I will be home tomorrow’ and know  my husband trusted me completely was such a freeing feeling.”

In general, polyamory has a bad reputation. Polyamorous relationships are often portrayed incorrectly in TV shows or movies, the common image being sexually insatiable people who simply cannot satisfy their physical needs with just one partner. However, a 2006 study interviewed “bisexual-identified practitioners of polyamory in the UK” and concluded, “The prevalent definition of polyamory as ‘responsible non-monogamy’ usually goes hand in hand with a rejection of more sex- or pleasure-centered forms of non-monogamy, such as ‘casual sex,’ ‘swinging,’ or ‘promiscuity.’” The results of the study indicate the members of the polyamorous community tend to define themselves oppositley from how the community is portrayed in the media. People in polyamorous relationships are not sexually insatiable, but simply feel that the maintream relationship style of monogamy is not right for them.

General misconceptions surrounding polyamorous relationships created trouble for Kleff when they began to date outside of their marriage.

“The issue I had at the beginning was trying to date people who were monogamous, or pretending to be polyam just to try to get with me. I dated people who would tell me they were better for me than my husband, and that I should leave him. It was toxic, and I was scared this would be my entire experience, and that this was a huge mistake.”

With only 4% – 5% of all adults in the U.S. currently in consensual non-monogomous relationships, Kleff severely limited their dating pool when they cut it down to only other people in polyamorous relationships. The risk paid off however, and six months after Kleff started dating outside of their marriage, they found their first partner.

“It was a little bit stressful at first, the time management was something that I had to get under control. I had to make sure I was making enough time for not only my partners but also myself.” They go on to say, “It was just nice to have another person to confide in a way that is closer than a friendship. We had things in common that I didn’t have in common with my husband and it was nice to be able to talk to someone about those interests.”

Kleff’s husband, Scott, also dates outside the marriage. After a similar struggle with finding a partner who was comfortable with the non-monogamous relationship the Kleffs were in, he found some success with partners who were also members of the polyamory community.

Kleff says that entering into a polyamorous relationship has not only been an improvement for them personally, it has improved aspects of their marriage.

“It’s been so good for our mental health, and it’s helped us get out of the house and try new things. There are so many cool places I have been out to with my other partners that I would have never gone to otherwise because I am not normally one to try new things, and I find in a seasoned relationship we get more comfortable just not going out.”

Although becoming polyamorous improved the lives of the Kleffs overall, they have not been immune to some hurtful comments.

“The hardest part about being polyam is the stigma,” says Kleff. “Not knowing if I can tell the person I’m talking to about that part of my life because I genuinely don’t know how they’re going to react. A lot of people will say things like, ‘humans were made to only have one partner,’ ‘this is gross,’ ‘you’re selfish,’ ‘you’re a whore.’ I’ve had people to my face say things like, ‘that’s really weird,’ or ‘I could never do that!’”

For people who may be considering becoming polyamorous, Kleff claims that communication is the most important part.

“If you are in a relationship already, you should open up about your feelings with your current partner. You have to be clear about your boundaries and what you’re comfortable with. If you’re single, just try it out. Make sure that you are open with potential partners with how many people you are seeing, because it’s important for all parties to know that if you enter into a relationship, it’s not going to be monogamous.”

Polyamorous relationships — so often represented in the media by weak story lines in sticoms with laugh tracks — have always been real and valid relationships. For members of the polyamorous community, their relationships bring them joy and the ability to be true to themselves. As we try to be more accepting and tolerant as a society, it is important to reconsider what is considered “normal,” and how “normal” can act as a way to exclude people.

Elizabeth Carter is a professional and public writing senior who enjoys developmental and copy editing, grant writing, and social media management. After graduation, she plans to pursue a career in political writing, and possibly work on a campaign. When she is not reading, writing, or cross-stitching, she is spending time with her husband and two-year-old son.