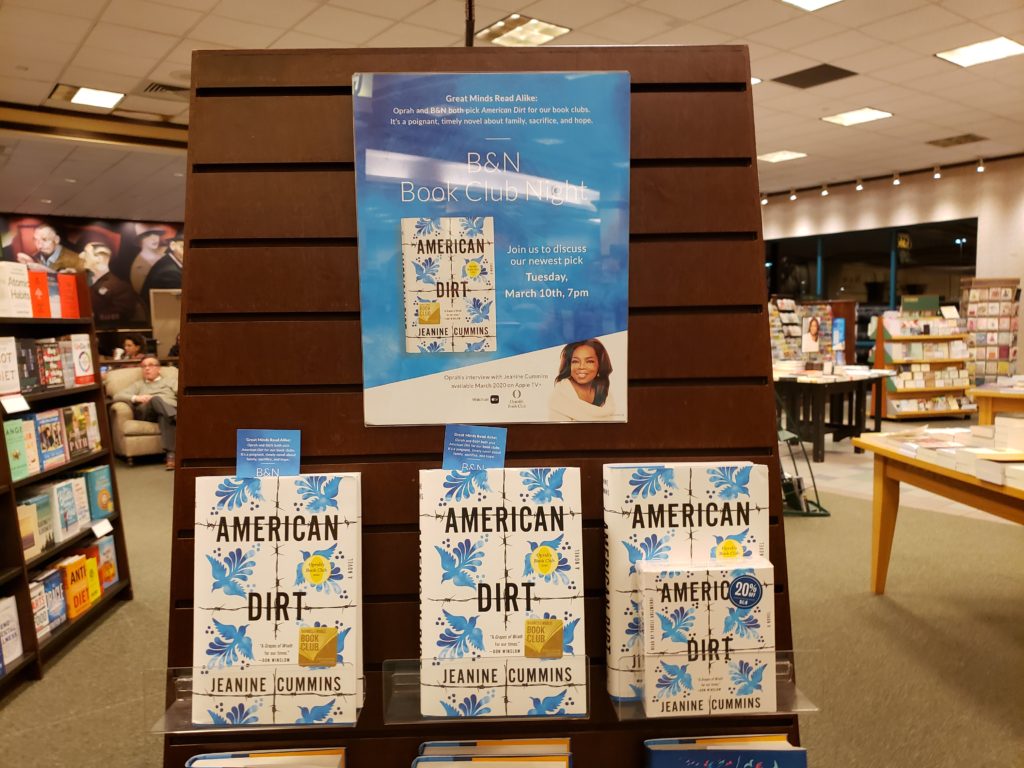 Jeanine Cummins’ “American Dirt” was released on Jan. 21, 2020 to a mixed bag of criticism and applause. “American Dirt” follows mother and son Lydia and Luca as they flee from a drug cartel boss in Mexico. Their destination is the U.S.-Mexico border, and on that trip they encounter several hardships that make the book read more like a thriller than its marketed genre of realistic fiction. While this premise seems interesting enough, the book has received staunch criticism from the Latinx community the author seeks to give voice to, though she is not part of it.

Cummins, who previously identified as white, received a seven-figure advance for the book, which is highly unusual for any author and is one of the main criticisms of the book because authors of color are often paid less than white authors. Cummins herself expressed how she truly does not understand racism, stating that she identified as white in a 2015 New York Times op-ed. However, this was turned around in the months leading up to the release of the novel, with Cummins claiming Latinx roots because her grandmother is Puerto Rican. Until it was convenient for her to use her Latinx heritage, Cummins firmly identified as white.

Prior to its release, there was hype surrounding the title from some of the biggest names in publishing. At the same time, when advance reading copies (ARCs) were put in the hands of booksellers, librarians, and reviewers, red flags were raised by readers. Despite this early feedback, the publisher, Flatiron, moved forward with publication in January.

However, it received a positive review in The New York Review, and after its release, Oprah Winfrey named it as her next book club read, tweeting that “from the first sentence, [she] was IN.” Barnes & Noble has also claimed the book as their January book club pick, and they created a special edition of the novel. There was even a blurb on the book that called it a modern day “The Grapes of Wrath.”

Upon its release and Oprah’s announcement, there was an outcry against “American Dirt.” Critics from all communities, most notably communities of color, called the book racist and something that panders to the White Gaze and a white audience.

In her piece for Tropics of Meta, Mexican-American writer Myriam Gurba wrote, “Her obra de caca [shit play] belongs to the great American tradition of doing the following: 1) Appropriating genius works by people of color 2) Slapping a coat of mayonesa [mayonnaise] on them to make palatable to taste buds estados-unidenses [people from the United States] and 3) Repackaging them for mass racially ‘colorblind’ consumption.”

Gurba’s statement is echoed in other reviews of the book. Roxane Gay, bestselling author of several books, wrote in Gay Mag, “If there is a cliché about Mexico, Cummins finds a way to exhaust it.

The lack of awareness found in “American Dirt,” despite the amount of research done, is glaringly obvious as several Chicanx and Latinx writers came forth with their lived experiences that Cummins is trying, and failing, to describe. For the novel, Cummins read several Latinx authors and did research near the border.

Gurba points out in the same article, “Perhaps Cummins fascination with borders explains Dirt’s similarity to other works about México and migration: her novel is so similar to the works she used for research that some might say it borders on the P word.” Many scenes have been lifted and mishmashed into one book from works that Cummins read to create a novel that is as frightening as Frankenstein’s monster.

According to the New York Post, the editor who acquired “American Dirt,” Amy Einhorn, said, “Cummins had been unfairly singled out for an industry problem far broader than ‘American Dirt.’” While this is certainly an industry-wide problem—approximately 80% of people in publishing identify as white women according to a 2018 Publisher’s Weekly report—it does not excuse Jeanine Cummins or “American Dirt.”

It is not that authors cannot write outside of their own experience. It is rather that when doing so, it must be done with the utmost care and respect to the community. Research must be done carefully and thoroughly, and still it must be meticulously examined. It’s clear the biases of both the author and editor were not checked throughout the entire editing process of “American Dirt,” and the result is something that is aggressively offensive to an already marginalized community.

The best way to fight as a reader against the institutionalized racism that is part of the publishing industry is to buy and support books written by authors of color, especially those writing about their own experiences. Request their novels from the library. Download their audiobooks. This is not to say that all people in publishing are racist, but it’s clear the industry has dangerous blind spots.

Working against institutional racism in publishing will be a long journey, but it can be torn down one book at a time.

Sophie Schmidt is an avid reader and activist who wants to work with stories for the rest of her life. To pursue this, she’s studying Professional Writing and has a minor in Asian Pacific American studies. When she’s not in class, Sophie can be found cuddled up reading a good book with her cats.