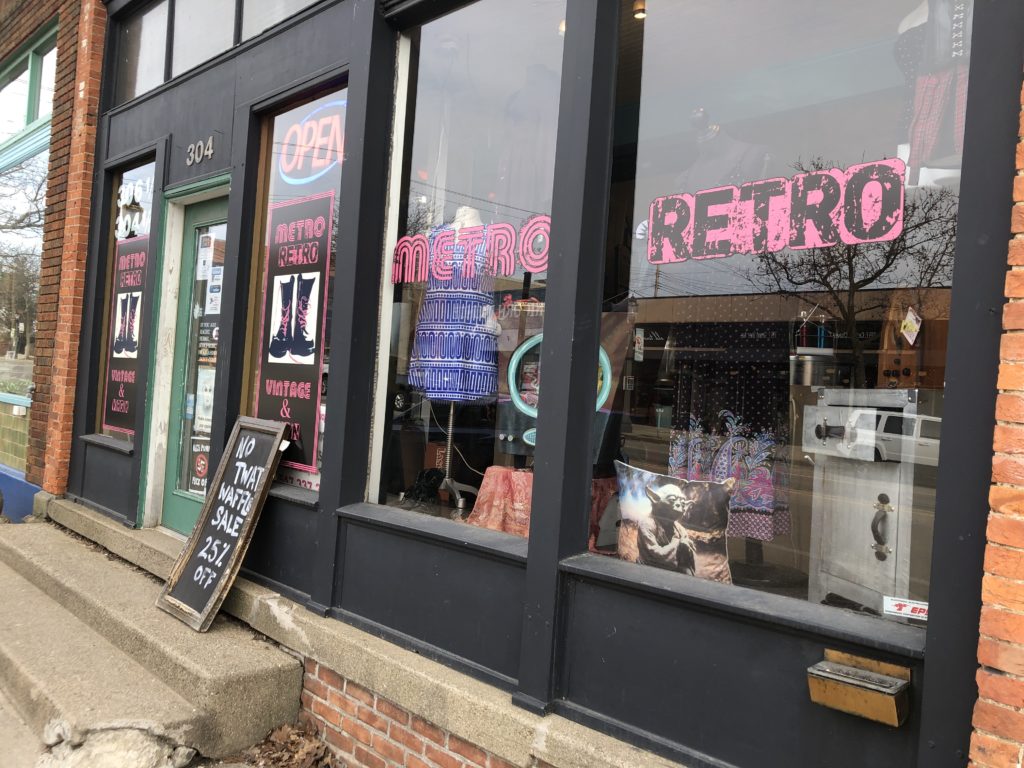 Metro Retro, like the other small businesses in Lansing’s Old Town, is housed within the first floor of an older brick building—number 304 on East Grand River Avenue, just around the corner from Preuss Pets where, oddly, I once went on a fish-tank-heavy date. I was a sophomore—my first year at Michigan State University—when I visited the store for my first time. I had thrifted a large, but easy-hanging denim jacket. The fit made a dysmorphic Aaron Applebey feel tiny.

The owner, a rebel of a gay, Ted Stewart (known to his customers as Ted), had praised my find, even knocked a few dollars off. Hell, I’m not one to shy away from a deal and if Ted wanted to incentivize me into finding my way back into Old Town, into his shop, he certainly succeeded. Oof, does this imagery sound like I’m hot for Ted? Hm. I think I’m just hot for vintage.

The thing is, I don’t — well, didn’t need any incentive. The store itself was enough; a flung-out step inside Ted’s eclectic worldview. Normally, racks of fur and leather coats, disco shirts and faded cowboy boots line the walls of the narrow shop. Steps away from a vintage Elvis PEZ dispenser hangs a sideways poster of filth queen Divine scowling at a 1980s Donald Trump.

When I visited last week—Thursday, March 12th in the middle of my last semester of college—on the coattails of a global pandemic, Michigan State University’s suspension of classes and Senator Bernie Sanders’ defeat in the Michigan primary, Ted remained strikingly himself.

“Make sure to wash your hands and if you see toilet paper, fucking buy it!” he shouted at a pair of exiting butch customers, giggling to himself while something loud by The Strokes played overhead. Ted, the way I see him, isn’t the sort of business owner to sanitize his personality for his customers. He prefers visitors to leave their entitlement at the door.

“I’m lucky. 90 percent of the people who come in here are pretty fucking cool,” he said. “Maybe 80 [percent]. Lately, it’s gotten lower. Maybe that’s my attitude about the state of the world.”

At the moment of our interview, on that Thursday, Ted soundly objected to the hysterics the mid-Michigan community seemed to be adopting as grocery stores across the region ran low on specific supplies.

“They cancelled the 4/20 festival!” he lamented, sliding the large plastic bottle of hand sanitizer in my direction. “It was supposed to be the first one in Lansing and it’s cancelled. April twenty-twenty first or something! Six weeks away.”

Perhaps the feeling in a moment like this—the beginning of it all—is a righteous sort of selfishness. Why is the 4/20 festival cancelled?* What hell is this new world?

But suffering of an institutional sort is greater, the suffering of a displaced working class and those now without a steady income unable to pay rent. Without dollars flowing into small businesses, it’s uncertain whether they’ll be able to reopen their doors when this all passes.

“What are you going to do?” Ted shrugged when I asked whether he would be keeping Metro Retro open. “Keep truckin’ on, right? I just don’t know what happens if I get shut down, what I would do.”

In the week since our conversation, with Governor Gretchen Whitmer’s intention to mitigate the spread of COVID19 through her Stay-At-Home order following the closing of K-12 school buildings and shut down of all Michigan bars and restaurants, Ted has made operational adjustments.

“Metro will be closed for any walk in foot traffic … fb message appt only of 5 people at a time for 2 weeks till April starting tomorrow! Gift Certificates still available…” reads a post published to Metro Retro’s FaceBook page on Monday, March 16th. “Re-open when our neighbor bars and restaurants are able to!”

Beyond solidarity, Lansing businesses are pivoting around this situation in an effort to help their community and remind them of their presence. Strange Matter, another queer mainstay, currently hosts a can drive and encourages regulars to purchase e-gift cards to pay staff during closure. Saddleback BBQ is giving away meals to kids while the owner of Everything is Cheesecake is using her food truck to give out free meals to kids.

It’s odd, but I can’t help but return to the hour I spent in his shop last week; an interview distracted by a looming backdrop, before any real policies or public information were released. Customers would interject Ted and myself to ridicule Joe Biden or share a moment of weighted silence over Tom Hanks and Rita Wilson’s diagnosis of COVID-19.

“Bernie could still get it,” a scruffy faced customer said, waiting for their friend in the dressing room.

“Wow,” Ted responded and then with a perfect pause, “What’s that?”

It’s difficult to wrap our heads around the unknowability and the degree to which COVID-19 will impact Lansingers. The loss is certain. Its extent is not. What we’re seeing though, through the actions of local businesses, is a community working to support one another from afar. This is what we hold onto.

If my goodbye to Lansing is a scatterball conversation with a business owner I loosely associate with my time at MSU over these past three years, then so be it. But for now I’m going to let myself mourn. And then, endure.

Aaron Applebey is a Media & Information senior with minors in Public Relations, Filmmaking, and LGBTQ+ Studies. In their free time, Aaron maintains a passion for creative writing, performing comedy and watching movies. Follow @ajapplebey across the socials for chaotic midwest ramblings.