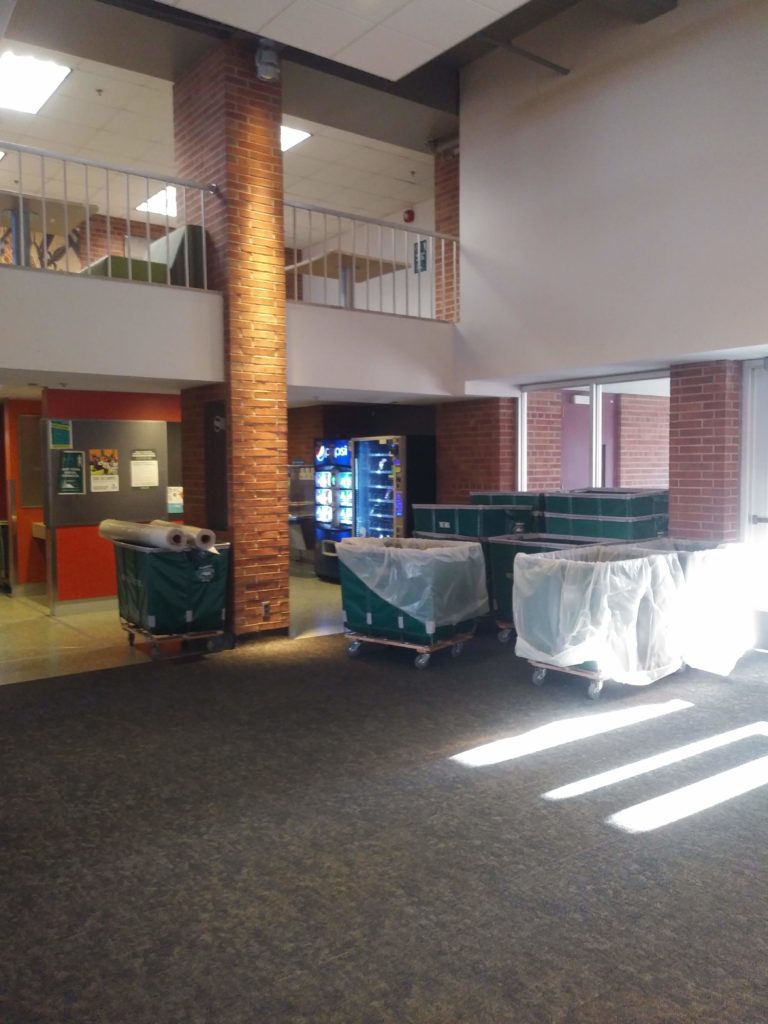 On Wednesday, March 11, the Michigan State University community received an email from university President Samuel L. Stanley Jr., notifying the student body of the suspension of in-person classes, in response to the first two cases of the novel coronavirus being confirmed in Michigan the prior night. The effect on campus was immediate — students left their East Lansing residences in droves throughout the afternoon and the next few days in response to the university’s “strongly encourage[d]” recommendation that students “return to their permanent place of residence”.

A sizable number of students, however, were intent on staying on campus. There were international students whose home countries had restricted international travel; students with young siblings or elderly grandparents who didn’t want to risk carrying the disease home; those who wanted to ensure they had good WiFi for online classes; and students who said that they simply wouldn’t be able to concentrate on their now-online classes around their families. MSU then announced classes would remain online for the rest of the semester, rather than until April 20 as originally planned. And as the seriousness of the crisis kept escalating nationwide, many students who had originally planned on staying went home.

Nearly 16,000 students live on campus at MSU. Emily Guerrant, a spokesperson for MSU, reported on March 17 that 14%, or about 2,350, of those students were still living on campus. Two weeks later, those numbers are almost certainly even lower. More recent estimates from another MSU spokesperson, Dan Olsen, suggest that about 600 students remain. I am one of those few remaining students, and the quietness of campus is deafening. Case Hall, like the rest of MSU’s South Neighborhood, is organized in suites of two rooms with a shared bathroom, designed for four people to share, but I’ve got the space to myself. The most interaction I have with other people is when I go downstairs to the dining hall, where I can at least have the comfort of seeing other humans, though there typically isn’t any talking.

In order to reduce human interaction, and the chance for any disease to spread, MSU has been increasingly altering dining operations. On March 11, this meant the removal of self-serve items and the addition of more bottles of hand sanitizer. As the situation worsened nationwide, cafeteria hours were reduced and sections of seating were closed. Now, I enter the dining hall through the other side of the building (only one entrance makes it easier to count how many people are inside at a time), and scan my own ID under the supervision of an employee, to keep them from having to touch a potentially dirty ID. I can walk up to whichever counter I want food from, but instead of asking a worker for what I want, I just grab a pre-packaged to-go box.

I fully support these measures, since they curtail the possible transmission of the disease, but it really hits home the severity of the COVID-19 crisis. I got lucky living in Case — our dining hall is the only one still open out of the three in MSU’s South Neighborhood. Less than one dining hall remains open in each neighborhood. MSU’s signature Sparty’s locations, which are a combination of a convenience store and a place to get snacks that come with certain meal plans, have closed as well. While things worked out conveniently for me, students in North Neighborhood were less fortunate. None of the North dining halls remain open, forcing students living there to trek to another residential neighborhood.

No part of campus remains unaffected. The typical CATA bus routes servicing campus have been suspended. The MSU library and IM buildings have long since closed. Most halls are now locked 24/7 except to those living there. Facilities workers patrol the building once or twice a day, armed with a spray-on-disinfectant. I can hear them at odd hours walking down the hall, spraying each doorknob, and it feels more than a little dystopian. Elevator buttons are also frequently cleaned, and the service desks in each lobby are shuttered even when they are staffed, in order to keep a physical barrier between workers and students. The only thing that’s the same is the distant noise of the trains that pass through the bottom edge of campus.

I’ve found little pleasures in the emptiness (I can blast music while taking a shower now), but I’ve got to admit that I miss the bustle of campus. Yes, it annoyed me when people on my floor had a late-night get-together and blasted music, and it was inconvenient when I had to wander the packed cafeteria to find an open seat. Now, even an introvert like myself would give anything for those markers of normalcy.