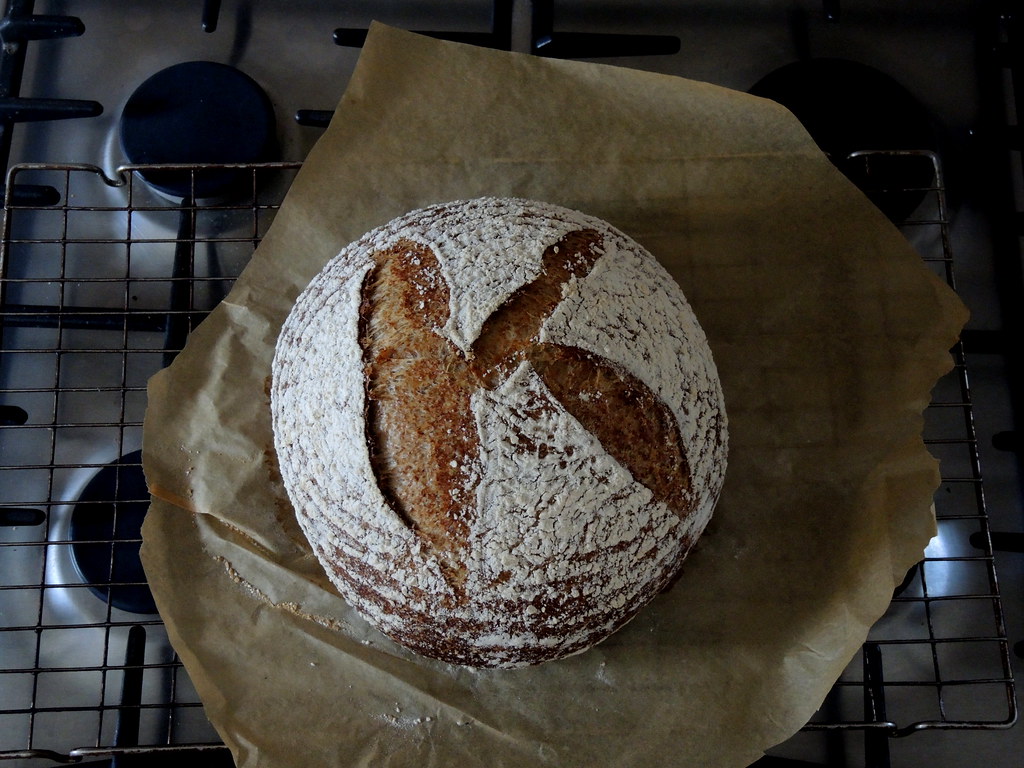 With coronavirus confining us to our homes, many people are embracing a new hobby: baking bread. The surplus of free time the pandemic allows has provided a perfect opportunity for people to start this hobby that was too arduous for many in pre-quarantine times. Twitter is now filled with students and young urban-professional-turned-bread enthusiasts, with “Sourdough Bros” being the new swoon-worthy men on the platform, and people sharing their recipes, photos and instructions for making starters (which we will discuss later). For the casual bread fan, this is a lot to take in, especially if the only thing you know about bread is how to buy it from the store. The Current hopes to enhance your bread knowledge with this guide to sourdough bread!

What is sourdough bread?

Sourdough is a bread so unique that it has its own section on the Wikipedia page for bread! The thing that makes it different from other breads is that it does not use a store-bought industrial yeast, but a cultivated “starter” that acts as the leavening agent, which makes the dough rise. This starter is made by letting a flour and water mixture ferment, a similar process that happens when making other foods like kombucha, kimchi and tempeh. This fermentation creates a yeast colony made of the bacteria that is present in the flour. In sourdough bread, the bacteria, called lactobacilli, produce lactic acid, which gives the sourdough its sour flavor. Like other breads, the yeast produces carbon dioxide, making the dough rise.

Bread is considered a “staple food” or a food that is essential to the diets of a large part of the world, and sourdough is one of the oldest forms. The earliest physical proof we have of sourdough bread is a 3500 year old loaf that was found in present day Switzerland. It is unknown how the first bakers of sourdough got the idea, but wall paintings and dissection of fossilized loaves show that this process was being used in Ancient Egypt, and through trading routes, this practice spread from there. From Ancient Egypt, sourdough bread making arrived in Ancient Greece, where they took the technique and used it to make over 70 varieties of bread. At this time, bread was a luxury and was even sold in bakeries in Ancient Greece. Like many other facets of life including religion, art and science, the Ancient Romans learned bread making from the Ancient Greeks. Roman bakers would even stamp their breads for name recognition.

Sourdough bread has a place in American history too, notably in 1800s San Francisco, where miners would keep their starters on their person, warming them next to them to keep the yeast alive. Boudin Bakery in San Francisco is still open today and uses the same starter as when they were founded in 1849. Cooking school website The Sourdough School explains that until the industrial revolution when commercial yeasts were made and sold, all bread yeasts were made from the natural fermentation process and not industrial yeast. Thus, all breads were technically sourdough. The website also explains that a sourdough starter can be used to make a variety of kinds of bread products, not just the loaves we usually think of sourdough being in, and that different cultures use the yeast in different ways:

“The Sudanese, for example make kisra (fermented dough made with sorghum), The Ethiopians use wild yeast to make injera (teff), Mexicans make pool, a fermented corn drink, Ghanaian kenkey and Nigerian use fermentation for their maize to make ogi, Indian idli breakfast cakes, made with rice, beans or chickpeas, and the Turkish make bona (a ferment drink) generally with wheat, maize, sorghum, or millet and Nigerians ferment the cassava to make gari or fufu with.”

Recently, with people becoming more interested in local shopping and clean eating, sourdough bread baking has come back in the US.

All this talk about starters may make you wonder what the hype is about. If it’s just flour and water, why is it so hard to get one? The reason behind this is that the starter is not just a static thing, but a living colony of bacteria. Like other living things, it must be “fed” so that it stays alive. King Arthur Flour’s website details how to make and maintain your starter, which involves adding flour, water, watching for bubbles, adding more flour and water, keeping careful watch over ratios, and more. Keep in mind this is all over a period of days just to get a working starter going, so it is no wonder why people try to use existing starters for their bread making efforts.

There have been some notable starter stories that have captured the public’s fascination with sourdough bread, one being a woman from Newcastle, England, who was maintaining (as of 2011), a starter that had been traced back to 1889 in Wyoming.

Another amazing recent news story was of the man who made bread out of the remnants of bread on a stone kiln. Smithsonian reports that “Richard Bowman, a doctoral candidate in microbiology at the University of Iowa, helped in the process, injecting a nutrient solution into the ceramics, which reawakened dormant yeasts. The team then extracted the yeasty liquid.” The person who wanted to do the experiment, Seamus Blackley, took home some of the sample and used it to make a loaf of sourdough bread.

Upon tasting the bread, Blackley said “The aroma and flavor are incredible,” he added. “I’m emotional. It’s really different, and you can easily tell even if you’re not a bread nerd. This is incredibly exciting, and I’m so amazed that it worked.”

What makes this story even more phenomenon is that Seamus Blackley was well known before this, as he is the inventor of the Xbox. You can find the whole breadmaking journey, as well as other bread, flour and Ancient Egypt memes on his twitter (@SeamusBlackley).

Hopefully, with all of this sourdough information, as well as the free time that being at home during the coronavirus pandemic may be affording you, try your hand at some sourdough bread today!

Emily Hobrla (@emilyhobrla) is a Senior studying Professional Writing with a focus in Editing and Publishing. She loves making new friends in the PW major and beyond, and is excited to contribute to The Current with writing and editing work. Outside of school, her interests include fashion, tennis, and squirrel watching.