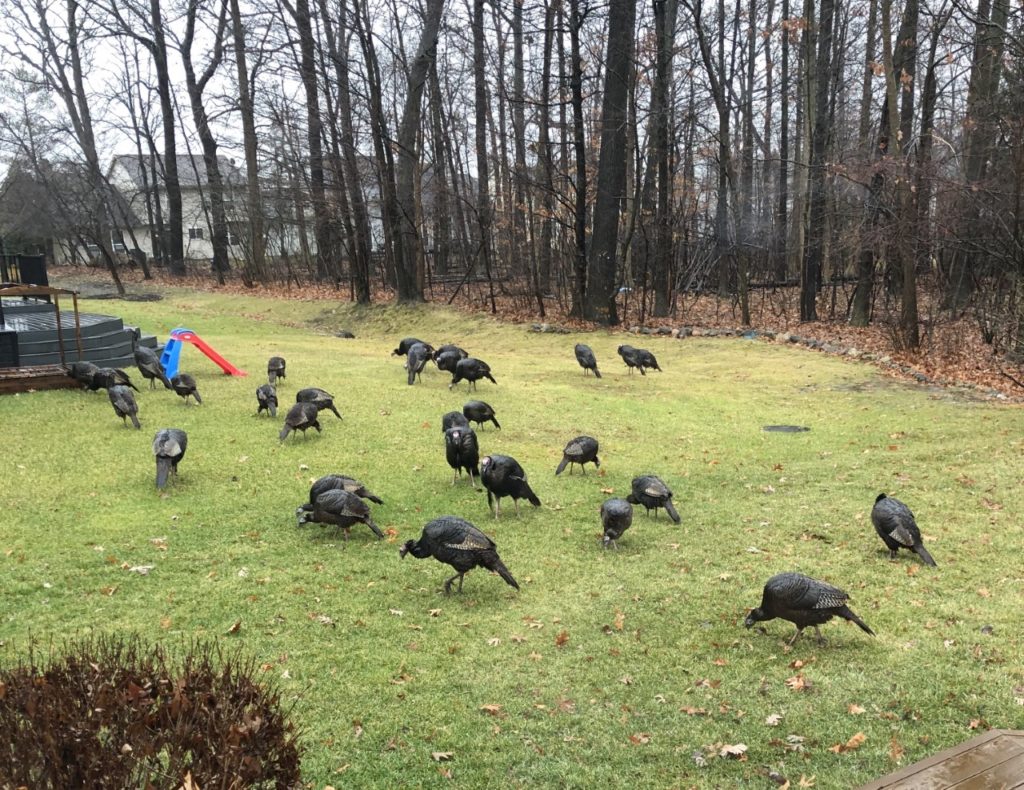 You’ve heard about people rising in the morning to the crow of a rooster, but have you ever heard of someone waking up to the sound of turkeys gobbling outside their window? In the Metro Detroit area, this has become the norm in most neighborhoods. After being nearly extinct at the beginning of the twentieth century, the wild turkey population has skyrocketed over the past few years–particularly in the Detroit suburbs–with over 200,000 wild turkeys statewide as of 2018. Some view this species restoration as a conservation success, however, others view the seemingly overpopulated wild turkeys as an utter nuisance.

According to an article from MSU Extension, wild turkeys originally began dropping in number due to habitat degradation and a lack of hunting regulation laws. The main proponents in restoring the species population were ensuring that the turkeys had access to food and shelter year-round. Michigan winters experience large amounts of snowfall, which poses a threat to turkeys in the area. These efforts were so successful that in 2013, hunting season allowed for 300,000 birds to be harvested. Prior to that, in 1977, just 400 wild turkeys were harvested. The drastic increase in numbers shows the true success of these conversation efforts. Even though the hunting restrictions on wild turkeys have become more lenient, it is possible that the restoration was too successful, making the population of wild turkeys in Michigan almost too high to maintain. Wild turkeys have taken over the suburbs and cities of the Metro Detroit area as opposed to living in their natural habitats of swampy or heavily forested areas.

A homeowner in Walled Lake, a part of Oakland County, has had a long history with the wild turkeys that habitat the woods behind her home. Marci Glynn has been living with flocks of twenty to thirty turkeys in her backyard for a little over three years now. While the turkeys have not posed any physical threat, they have done severe damage to Glynn’s lawn and garden, constantly eating newly planted grass seed and attempting to nest in the middle of her yard.

“They are a nuisance to homeowners especially in the spring when people plant grass seeds and flowers. And they have been quite forward in coming up onto my deck and in my mulch to eat my foliage,” said Glynn. “Part of the reason these herds of turkeys are so prevalent in our area is due to my neighbors feeding them. I feel as though they are never going to leave now that they have a food source year-round.”

Not too far from Glynn, the city of West Bloomfield has experienced several complaints concerning wild turkeys in their area. According to a report from Channel 7 News, the West Bloomfield Police Department once received thirty calls per shift filing complaints against a wild turkey blocking traffic back in 2018.

More recently in 2019, another incident happened in West Bloomfield where a woman was actually attacked by a few turkeys while on a nature trail. According to The Jewish News, a young photographer was walking the path and attempted to go around a flock of turkeys blocking her way. However, the turkeys lunged at her leaving several bruises as a result. While violence from these turkeys is not all that common, they are still wild animals and could potentially pose danger.

While conservationists are thrilled to see the wild turkey populations back and booming, many local residents of the Metro Detroit area fear the potential outcomes of the continually rising number. Glynn herself is concerned about the population numbers in her area specifically.

“I already have thirty-some turkeys roaming my backyard at a time. If the flocks this Spring are anything like the trend in the last few years, they will reproduce and have more chicks which will increase their population even more,” said Glynn.

According to The National Wild Turkey Federation, each turkey hen usually lays anywhere from 10-12 eggs per mating season. Additionally, according to an article on Knoema,  there are about 97 male turkeys per every 100 female turkeys in the wild. The fact that there are more females than males in the overall wild turkey population means that they will reproduce faster than if there were more males for females. In Glynn’s case, this could mean an overabundance of turkey poults (chicks) depending on how many hens mated this season.

As the wild turkey population continues to rise, hunting is one of the many factors that keep their numbers under control. However, areas that do not permit hunting, such as suburban and urban areas still have to face the overcrowded turkey populations on a daily basis. With the restoration of wild turkey populations evidently successful, the underlying consequences that follow the rise in numbers are likely to worsen. They may just be a nuisance as of now, but overpopulation is no joke and more drastic measures may have to be taken in the near future. A rise in the turkey population could not only wreak havoc on the yards of suburban homeowners, but it could also be detrimental to the ecosystems and food chains of the Metro Detroit area.

Nicole Glynn is a junior double majoring in professional writing and advertising management. She currently writes for VIM Magazine as a contributor to the women’s fashion team and volunteers at a local cat shelter in her spare time. She is also the External Marketing Director for the Beta Theta Chapter of Alpha Xi Delta, but more importantly, she is a loving sister to her 47 other housemates. She can be found asking every single one of her friends which picture to post to Instagram, what caption to use, and most importantly, going against every opinion her friends gave her in the process.