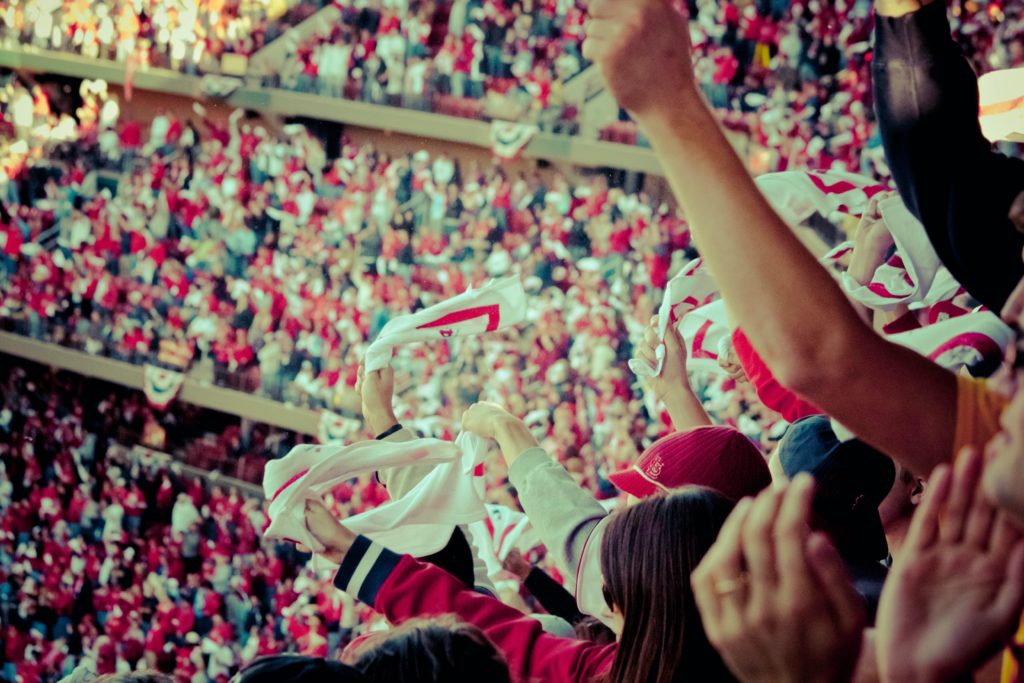 Regardless of whether or not someone considers themself a fan, sports have become an integral part of American life. What was once a passion, though, has slowly degraded into an unhealthy obsession for some.

The clinical definition of obsession is an abnormal fixation on an object, person or activity that might impair the ability to work or love. More simply, obsession can be understood as a disproportionate focus on one thing. Obsession often has negative associations such as over-cleaning, excessive preparation for unlikely disasters or stalking someone in a relationship, but a love of watching sports can be equally life-altering. Many people may attribute their love of watching the game as a fandom, no matter how extreme, but at what point is a fan too dedicated to their team? Someone’s dedication to their favorite sports team can easily be taken too far and into dangerous territory.

When someone’s team loses, there can be emotional and physical ramifications. This article offers suggestions on how to enjoy a game without growing physically distressed, and this list includes “watching with ‘good’ fans who won’t overreact,” exercise prior to lower stress, and turn the volume down to decrease agitation. If fans are getting so anxious during a game that they need tips like these, they are no longer enjoying the game as entertainment. After a loss, many fans may exhibit signs of depression for a day or two after, especially if they follow a team too closely. Studies have also found that fans of a losing team consume more saturated fat in the following days compared to those of the winning team. These, and other risks, occur because some sports fans identify very deeply and personally with their favorite team, so when the team loses, it feels like a personal loss and not just a game.

Sports games are also often associated with drinking. Not only is it common for fans to drink during a game, but they might drink more when their team is losing, and consuming too much alcohol can lead to a number of problems such as domestic abuse. While there has been a widespread myth that Super Bowl Sunday has the highest rates of domestic abuse incidents, this has been dismissed by experts. Unfortunately, they do admit that there is a spike in the number of calls on this extreme sports day, similar to the increased number on major holidays. So, while Super Bowl Sunday is not the most notorious offender, this correlation is still nothing to brush off.

There are other alarming mental factors that might suggest a sports obsession in some people. For example, getting excited when a player on the opposing team is seriously injured, especially if they are a good player, can indicate that the need for their team to win is greater than their empathy.

Some fans are so extreme that they verbally attack other teams, individual players or fans of rival teams. Daniel Carlson, an ex-kicker for the Minnesota Vikings, had a very bad game one day, missing three important field goals including one that could have won the game. The next day he was released from the team, but losing his job was not the worst of it. Carlson suffered hate on his social media because of his field goal misses, and he made his Instagram account private for a period of time as a result.

Another example comes from John Higgins, an NCAA referee. After a March Madness game between Kentucky and North Carolina, the referee reported receiving harassing emails and phone calls, and even death threats through his roofing company and its Facebook page.

Perhaps the most disturbing behavior related to overly dedicated sports fans is rioting. There are a dozen riots stemming from sports games, but a couple of extreme examples include those at the Port Said Stadium in 2012 and the World Series in 2014.

After a soccer game at the Port Said Stadium in Egypt, a massive riot broke out with the winning team brutally storming the field and attacking the opposing team’s fans. As a result, over 70 people were killed, with even more injured. In 2014, when the Giants won the World Series, the fans celebrated by setting the streets of San Francisco on fire. Trash cans, couches and mattresses fell victim to the rioters’ flames. There were 40 total arrests, and one man was stabbed multiple times and taken to the hospital. Extreme riots are dangerous for everyone involved, and fans being this elated after a win demonstrates an underlying unhealthy and reckless devotion.

Having a favorite sports team and feeling sad about them losing is understandable, especially when science has pointed out the associated benefiting factors, but causing physical or emotional damage to a stranger based on athletic ability, destroying property in a massive riot or favoring the television during a regular season over family points to something more serious than the final score. Passion is healthy and there is nothing wrong with having an interest or a hobby, but it should not be more than that. There is a balance in life, and no single thing should dominate. Not even your favorite sports team.

Katherine Marchlewski is currently a junior studying professional writing with a focus on editing and publishing, and minoring in film studies. After graduating, she hopes to find a career related to editing and publishing, ideally with fiction novels. In her spare time, she enjoys reading, watching movies and scouring Pinterest.