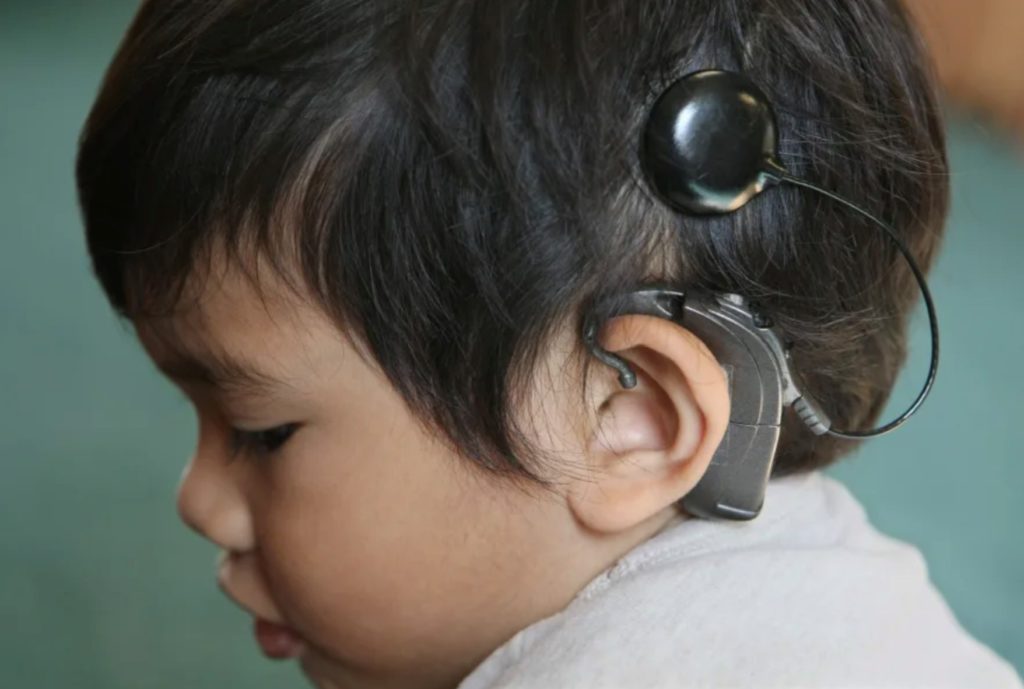 In 2014,  a video went viral of a deaf woman in the U.K. who broke down in tears when she heard music for the first time through her newly placed cochlear implants, or CIs. CIs are devices that bypass the natural acoustic hearing processes and replace it with electric signals. For many, this video was quite moving. However, to members of the Deaf community, that video reinforced one of the most problematic misconceptions about the community: deaf people are broken and need to be “fixed” by invasive medical procedures or expensive state-of-the-art technology.

The video also fanned the flames of the controversial practice of hearing parents fitting their deaf children with CIs before the child is old enough to make the choice themselves. When a member of the hearing community has a deaf child, it is often expected they will go through with the CI procedure. This expectation implies the responsibility of learning how to communicate is on the deaf person, not the hearing person. Sadly, the hearing community in general is unaware of the rich and deep history of the Deaf community and the potential benefits of foregoing a CI.

Out of the 20,000 people in the U.S. that have CIs, half of the recipients are children. T.J. Owens, a 29-year-old Austin, Texas resident lost his hearing at age two. Regarding the videos, Owens says, “Cochlear implants can be great and I don’t oppose the idea, but it is not a cure to deafness. I just think the videos just give the wrong idea that we are ‘fixable,’ but we are not ‘broken’ in the first place.”

Owens uses American Sign Language (ASL) to communicate, and while he is not against CIs in general, he believes it should be made an option to children rather than forcing it upon them.

“It is all up to the parents, but in my opinion, it is better off to have a long, deep conversation with the kid about getting one rather than forcing it upon them.”

For Owens, learning ASL was more beneficial for him than getting CIs. He feels that he should not have to try to “fit in” with the hearing community by getting implants, he is Deaf and proud of it.

“It is totally unfair for hearing people to expect Deaf people to get cochlear implants or learn how to speak instead of hearing people learning ASL. ASL is great because it benefits everyone.”

Chloe Lovitt, a freelance ASL interpreter in Rochester, New York, feels that the videos of people hearing for the first time are disheartening.

“It seems like they are rejoicing that their loved one is no longer ‘broken’. Being Deaf doesn’t mean you’re broken or that you need to change something about yourself to fit in with other people around you. Deaf culture should be celebrated for its beauty and complexity and history; which can easily be done while learning ASL.”

In Lovitt’s six-plus years of involvement in the Deaf community, she has met people who are pleased with their CIs and others who have had so much trouble with them, they had them removed. Lovitt explained,

“Cochlear implants are a tool that are successful for some, and not a good fit for others. When someone takes off their CI to shower, or go to sleep, or while playing sports, they are still deaf. It’s a personal choice for every family, and especially the deaf individual if a CI works best for them. I don’t think it’s a replacement for sign language by any means, but it can be a useful tool.”

Most importantly, Lovitt points out that she is not in a position to say that CIs are bad.

“I’m not Deaf, and I believe that whatever tools a person chooses to use or not use, is up to them. I do think that the crux is equal access, and to provide accommodations for those who need it. I got into interpreting because I had heard horror stories of Deaf people being consistently dismissed and left out of significant events or conversations in their lives.”

Carolyn Sykes has been working as a speech and language pathologist in the capital area school districts for 25 years, and has worked with three deaf children, two of which had CIs. Sykes has experienced both success and failure when it comes to CIs.

“In terms of language development, I think [American] Sign Language is as effective as implants…the implants make a significant difference in the development of speech sounds and speaking. They are able to hear if the sound is being produced correctly which is important for self-monitoring.”

However, Sykes did have one student who struggled with his CI, and said he “didn’t like his implants and the hearing aid device you must wear with it. It bothered him so much he would take it off a lot of the time and then you couldn’t communicate with him at all.”

Overall, Sykes believes that “both sign and CIs should be used. Always have a backup plan. Implants can not always work, so if there is a problem, the student should have an alternate way to communicate

and learn. There will be those days when the devices will run out of batteries, break or are lost.

If this happens, there will be no learning so it is crucial that there is an alternate way of communication.”

The decision to be fitted with a cochlear implant should be nobody’s choice but theirs, but often the procedure is done to young children who do not get a say in the matter. It is very important to do the research of the pros and cons of any medical procedure, and CIs are no exception. Changing the misconception that deafness is something to be repaired rather than embraced is the first step towards the hearing community accepting and understanding those who choose not to get cochlear implants. As Lovitt says, the Deaf community “is a strong, resilient and passionate community that will not be suppressed by hearing privilege.”