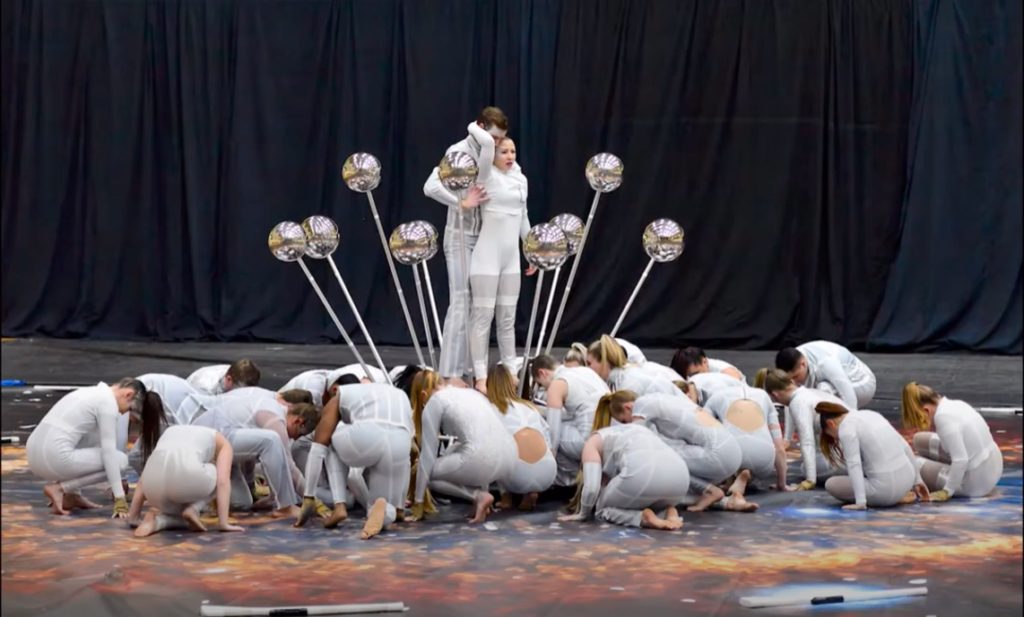 Ever since my freshman year of college, I have been leaving campus every weekend from November to April, to compete with an independent winter guard based out of Grand Rapids, MI. From 6:00 p.m. on Friday to 5:00 p.m. on Sunday, I left behind my degree, my homework, my life at Michigan State to throw around flags in a gym, compete in arenas around the Midwest and then blow up an air-mattress and sleep for about six hours before I did it again.

And for the longest time, this worked. I thrived on keeping the two separate: winter guard on the weekends, and my English/professional writing degree on the weekdays. The schedule kept me on track, and being busy turned out to be a good thing. But the more I tried to keep the performance and writing separate, the more they seemed to spill over into each other.

When I was on the floor with my team, I watched my show get edited and rearranged, and it reminded me of being at my computer: copying and pasting paragraphs to places where they fit better, erasing entire sentences and replacing them with something better. I saw color guard shows written to speeches and essays, with no music at all, just voice overs, the choreography reflecting the cadence of the voices in the soundtrack. I realized that no matter how long my team and I practiced and tried to figure out what our show meant to us, it was out of our control the second we put it in front of an audience, like writing.

And once I realized the similarities between my degree and the activity I loved so much, the two never stayed separate again. Writing is a performance, and a performance is a piece of writing.

My best writing came out of my experiences performing because these are the two things that meant the most to me. Performing finally gave me something meaningful to write about. While so many people told me I was missing out on the “real college experience” because I was leaving so often, the thought of giving up what I left for was never an option.

So when I needed to create my capstone for both my degrees, the only way I could think to explore was the relationship that built my college experience: performance and writing.

As I started planning this project in the fall of 2019, the pieces already started to fall into place. My capstone class was paired with WRA 480, where I worked with a team of talented writers, designers and editors to produce The Current: a magazine that was already proving to be a group performance in and of itself.

In the fall of 2019, I was also auditioning for my (supposedly) final season with Interplay, and was already able to see how this season would overlap with my ideas for my capstone.

And then my season was cut short, by a pandemic that cut every other competitive season short, too. Every championship game, every last show, every performance ceased to exist. It was difficult for me to mourn this loss—Interplay was the place I could always go when things got weird in real life, and the one time I needed to be there the most, I couldn’t go. Having empty weekends (and empty weekdays) was something I was never used to, and my carefully crafted busy schedule was ripped out from underneath me. No matter how much I had time to do things on the weekends, I couldn’t shake the feeling that my knee should be hurting somewhere on the West Side, surrounded by all of my best friends.

Writing about performance suddenly became very difficult, for the first time in my life. I couldn’t give the stories I loved so much from the last few years the weight I wanted, because my mind was always somewhere else: how am I supposed to write about performance when I’m not performing anymore? Seemingly, everyone in the world felt the same way I did, but at the same time I had no idea how to convey the weight of this loss. This was supposed to be my closure on my writing at Michigan State, and I never got the closure or the performance that I needed.

Interplay World’s 2020 show was titled “Hindsight,” and circled around the idea of memories and understanding why things happen only after they have happened or developed. And if there’s one thing I’ve learned in this short time, it’s that even if I don’t understand this situation now, I will as time passes.

Less than a day after Winter Guard International cancelled their championships, someone made a Facebook page where teams from all over the country could post videos of their latest performances, so that their work could still be shared with the community. The page had over 12,000 members in a week. The community is still finding ways to share their stories, despite everything.

The staff of The Current is still making a magazine, finding ways to share their stories, despite everything.

I’m still writing. No matter how difficult it is to be creative right now, there is still something that needs to be said. Maybe in hindsight, this will all make sense.

Leah Wright is a senior studying professional writing and English with a concentration in creative writing. She is pursuing a career in editing and publishing, but hopes to eventually become a published novelist. When she isn’t in class, she can most likely be found spinning flags with various color guards, but she also enjoys listening to Bruce Springsteen and reading good books.