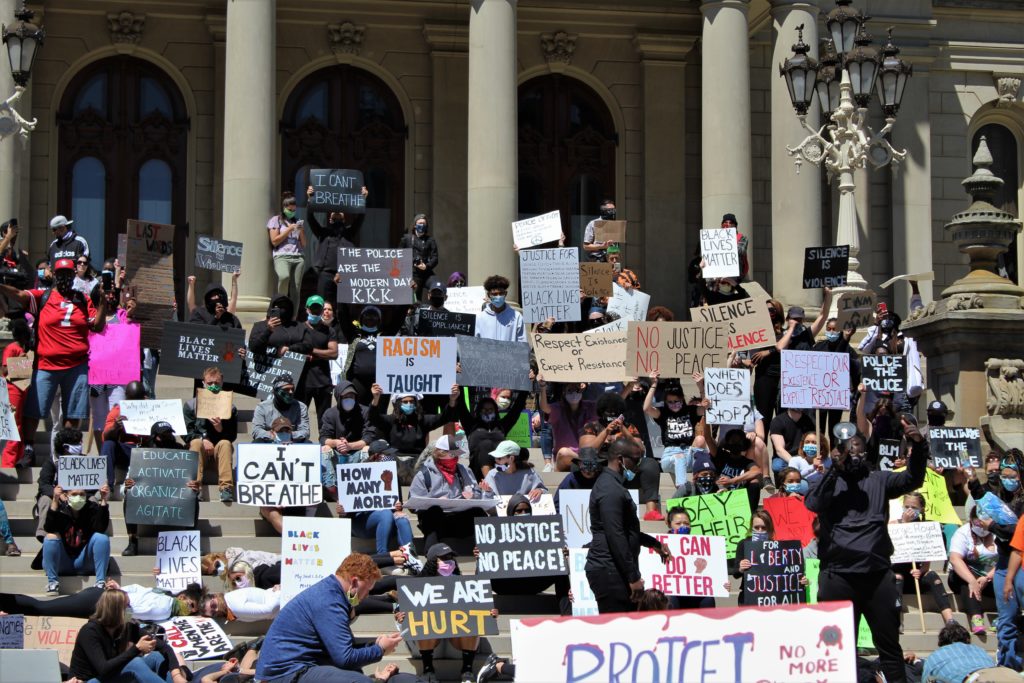 I went to the Lansing protest against police brutality on May 31, 2020. A few friends and I went as a show of solidarity; to support and to listen. I was only there from around 11am to 3pm, but the experience was still striking nonetheless. I had a feeling that I should bring my camera to the protest. It just felt right to visually document this revolution, even if it was only the small part of the protest that I was a part of. While, as a white person, my voice isn’t an important one during these times, it felt important to say something; to talk about what was happening and to stand with those who are victims of police brutality. To stay completely silent felt like turning my back on these people.

The days before the protest were mainly spent watching the news, along with most of America at that point. As we watched the protests take place in Minneapolis and Washington DC, we knew we wanted to be a part of it, as much as we could be. As I read the signs of the protesters saying “Black Lives Matter” and “Say Their Names” the posters that stood out to me the most said “Silence is Violence.” The longer I watched and did nothing the more harm I felt I was doing. We heard there would be a protest in Lansing near the capitol building and wanted to be there to show our support.

I was unsure of what I expected, but it wasn’t exactly this.

There was a tragic beauty in the community at the protest. Strangers would say words of love and support to other strangers. People unseen would drop off water and snacks. Next to the steps of the capitol building there were even small bottles of water labeled “Baking Soda” to indicate that they could be used when the police started throwing tear gas. However, even amongst this camaraderie there was still a spark of fear and distrust in the air. It seemed some people expected there to be more hate and less love at this protest, not only from the police, but from their civilian supporters. As we walked back to the car we saw an incident where a woman became upset, thinking that another protester’s sign said “Blue Lives Matter.” The comment was made that the protester should get a new sign, however, the sign actually said “Blue Lives Murder” and it was all just a bit of a misunderstanding. That energy was present throughout most of the day, as though people were afraid that something was going to happen to ruin the overall peace of the day.

Despite the tense energy and outrage in the air, there was never a moment that the protesters created a hostile environment. The same cannot be said for the police. While many of those attending the protest continued to march the route multiple times, the steps of the capitol building were fairly empty. My friends and I sat down and looked out at the circle of people dancing near the road. We could hear music and laughter and while we all still knew what we had come here for, this moment of happiness and fun felt like a victory.

For a moment it all just felt quiet and calm, like we could all take a breath in that instant. At that moment we heard, and smelled, what was unmistakably spray paint. Glancing over, about ten feet away was a man spray painting the steps. We only later saw that he had written “Fuck 12” next to were he sat. A man, sitting a couple steps down and wearing a Thin Blue Line shirt, suddenly realized what the man was doing and became very upset. He began yelling at the man, telling him to stop and even got a couple other protesters to back him up. They pushed the man and knocked the can of paint from his hands. However, it was when they called for the police that everything dipped into chaos.

Two officers came and attempted to yank the man off the steps. The man pulled from their grasp and then began running. Several other officers joined in the chase and eventually detained him, but by that point the protesters had noticed the commotion and began surging towards the officers and the man. They yelled for him to be let go, yelled for them to keep the peace. I continued to watch on from the steps of the capitol, baffled not only at the supposed protester for calling in the police to a protest against police brutality, but also at the seemingly eager officers. It felt as though they had been waiting for something like this.

Later, as we were driving home, I could see another “Fuck 12” spraypainted on a power box in that same green paint. No one batted an eye at this tag, and it made the outrage on the steps seem that much more absurd to me. You can always power wash spray paint away, why does someone have to get hurt over a can of paint?

The entire protest left me in awe at the intimacy of the community. I knew that this was only the beginning of things, but I felt hopeful for the first time. I had felt for myself the strength of those that fight for what is just, and it left me speechless. In a show of solidarity, The Current would like to ask that you protest, donate if you are able, amplify the voices of those who have been systematically oppressed and remember to vote! The Strategist has an entire list of places you can donate to if you are able. Some favorites are: Change of Color Education Fund, Unicorn Riot and Homeless Black Trans Women Fund.