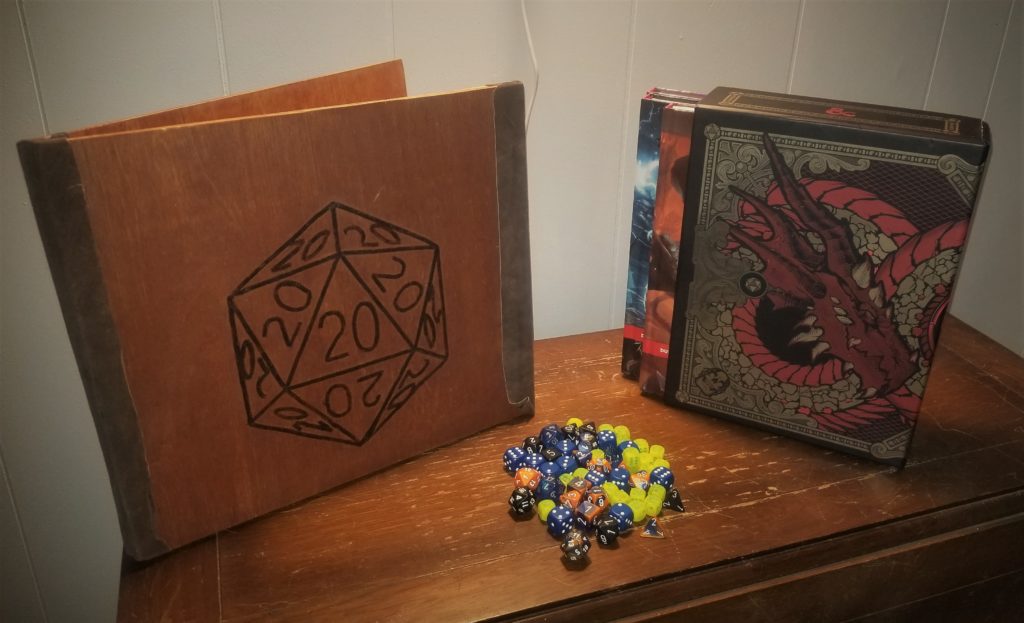 Looking back to only a couple of years ago, the fantasy role-playing game Dungeons and Dragons (DnD) was a game that people assumed was only played by massive nerds in their mothers’ basements. Okay, that may still be their main demographic. However, with the game being featured in  shows such as The Big Bang Theory, Community and, most notably, Stranger Things it’s become much more popular in mainstream media. For those who have heard of the game, but never played or are just unfamiliar, I’m hoping I can shed a little light on the subject.

Dungeons and Dragons, or some form of it, has been around for over 50 years. DnD was officially created and released in 1974 by Gary Gygax and Dave Arneson under their collaborative organization, Tactical Studies Rules. They produced three small booklets explaining the general rules of how to play the tabletop game. Now, there are entire textbook-sized tomes dedicated to creating characters, the different abilities you can unlock and there are many campaigns and adventures that you can go on. DnD is incredibly similar to most choose-your-own-adventure style games, except with a larger and more complicated lore. The community behind DnD is massive and for a while it was unknown, but now people are incredibly open with their involvement with the game and welcoming to those that might like to learn.

When faced with the number of possibilities of how to play the game or what kind of character you will be, it seems very daunting. However, consider this: it’s the same as the many possibilities you face in your daily life, but here you can potentially pet unicorns. If you can imagine it, it’s a possibility in the game. If you’re a beginner, start small and create a character you really love.

Creating a character can be as easy or as complicated as you’d like it to be. Choose your race, class and name. From there you’ll need to roll stats for your character to figure out how smart, strong or sneaky they are. For this portion of character creation the Player Handbook would be very handy. However, there are several digital versions and videos online explaining step by step how to fill out your character sheet. Once you’ve got the technical stuff out of the way, you can begin creating your backstory and an aesthetic for your character. These can be complicated, unconventional or ordinary; the world is your oyster.

Once you create a character you can either get a team together by gathering some of your own friends or finding people online that want to start a game. Whether you find your team on Reddit or Roll20, be sure that you and your team will get along during your adventures. If you decide you don’t like the combat side of DnD, then find people that like the puzzle solving aspects of DnD. Be sure to have a chat with the Dungeon Master (DM), the leader of the group who guides the team of players through an adventure, about your character, what kind of game play you’re interested in and how experienced you are. This will help them tailor the adventures to the group. For example, if your DM leads you into a room that locks you inside until you solve the puzzle, but you’re looking to fight off the biggest monster that you can find, the game won’t be as fun for you.

After looking at all the setup necessary to play the game, some might be discouraged. I certainly was when I first began, so I decided to ask someone who knew what they were doing. Jonny Warren has been playing Dungeons and Dragons for six years and now acts as a Dungeon Master for his team. “One of the things that I enjoy as a DM is the creativity. I get to make up a whole world for my players. I get to create the world and then they get to play in it. Anything is on the table whether it’s bar brawls or cults.” The unlimited possibilities are what draws most people in. You can truly be whatever you’d like, whether that is a warrior with the face of a dragon or a gnome that plays music in the middle of great battles.

If you’re still unsure about whether you’ll enjoy actually playing the game, consider listening to some DnD podcasts of other people playing. The intricate storytelling, intense battles and often humorous mistakes are always entertaining even if you aren’t actually playing. Some of my favorites are DnDnD and Critical Role. Both are extremely humorous and entertaining and could really help if you’re just trying to get the hang of how the game works.