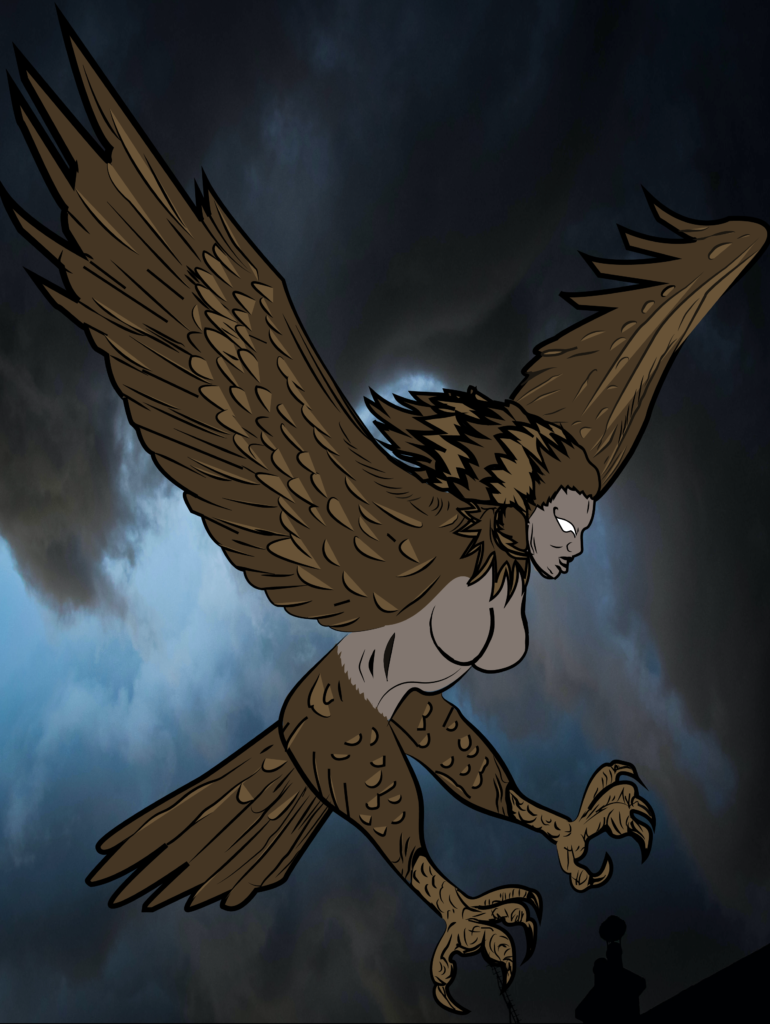 Western audiences are often fed beautified versions of stories from the past. An example of this that is often covered are the Disney movies we watched as children. They never mentioned any of the betrayals, rapes or deaths by hot iron shoes that the Brothers Grimm originally wrote. However, along this same line all of the mythical creatures we’ve been presented with are all rather beautiful and often even sexualized. Their original forms were often much more horrifying.

Harpies, half-woman half-bird creatures, are snatchers. They snatch their victims from the ground and taunt and torture them as they sully them to the Underworld. While that doesn’t sound sexy or beautiful at all, it should be no surprise that because harpies are half-woman, people took some artistic liberties. They’re often depicted as having the beautiful head and full chest of a woman with the rest of them being fully bird-like. The popular tabletop fantasy game, Dungeons and Dragons simply depicts harpies as  fully naked women with wings and clawed feet and hands. They’re perhaps not conventionally attractive, but there is still an  underlying sexualization that feels strange for a depiction of a monster that carries people to hell.

The Sphinx, a creature with the body of a lion, head of a human and sometimes winged, was originally a creation of Egyptian mythology. They were often depicted with the head of a man and lacked wings, but they made for excellent guards to keep evil away. However, in the hands of Greek storytelling, the Sphinx takes on a much more dangerous role. The appearance remains mostly the same, with the Sphinx having the head of a woman and sometimes possessing wings. Yet the perception of the Sphinx is drastically changed. In Greek mythology, she is dangerous and tricky; giving out riddles and devouring those who cannot answer them correctly. Despite this danger, the Sphinx is also portrayed in a more sexual light. Most likely due to the fact that in Greek mythology, she is a woman. In Franz Stuck’s The Kiss of the Sphinx we see a fair skinned Sphinx with exposed breasts, kissing a man. The atmosphere of the painting is sexual, but deadly.

Gorgons are monsters of the underworld. “Gorgons were portrayed as winged female creatures; their hair consisted of snakes, and they were round-faced, flat-nosed, with tongues lolling out and with large projecting teeth.” If this description sounds partially familiar it is because Medusa was a Gorgon. Medusa was originally a frightful creature, someone that no one would refer to as beautiful, however, her image began to change as the Greeks began to prefer aesthetic beauty over horrific imagery or brutal ugliness. One of the more recent depictions of Medusa was in the 2010 film Percy Jackson & the Olympians: The Lightning Thief where the Gorgon was played by Uma Thurman. It’s Uma Thurman, so obviously Medusa was terrifyingly beautiful. There are undertones of societal fear of women with the depiction of Medusa. Does Medusa represent the world’s fears of beautiful and powerful women? This image tweeted out by @trumpandtriumph back in 2016 might make you reconsider the depictions of Medusa over the years.

Sirens are some of the most interesting mythical creatures to have changed over the years. Modern sirens are depicted as very attractive, mermaid-like creatures with the ability to entice sailors into crashing their ships using only their voices. While they still have their deadly musical talents, the original depictions of sirens were as half-women, half-bird creatures; similar to harpies. The original depiction of them is actually much less sexual than even the original version of harpies. They look like birds if you stitched a woman’s head on top. However, somewhere along the line, they became sexualized half-fish women. With this more modern depiction of sirens, it wasn’t only their voice that lured men to their deaths, but also their looks. In the 2018 Freeform series Siren, we see actor Eline Powell play a creature they describe as a mermaid, but has the deadly edge that sirens typically have. She lures people in sexually and is also seen as a deadly force. Sirens seem to be the creatures that have fallen farthest from their original depiction.

The biggest question is why do these mythological creatures have to be sexy? It could be a fear of sexuality, particularly female sexuality, in society. In an attempt to subconsciously sway societal views, or perhaps because of the subconscious societal views, they depict women who are alluring as deadly and to be feared — monsters. It could also have to do with objectification; women, even monsters, must be conventionally attractive. Either way it seems like something we should attempt to pull away from.