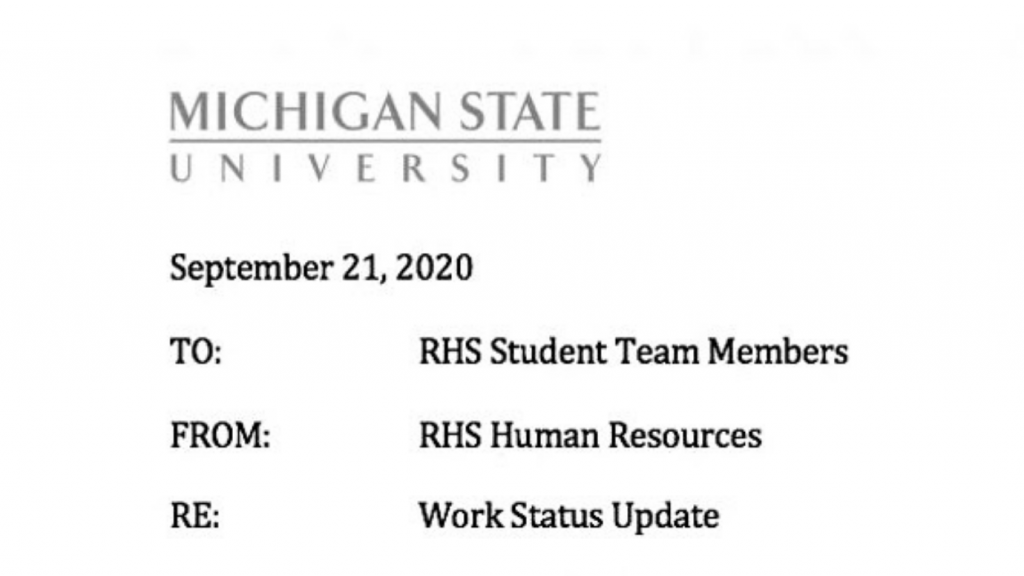 2020 has been a year unlike any other for students. The abrupt change to online learning in the spring left many confused and frustrated. However, the summer break left many hopeful for the return to normal classes in the fall. Unfortunately, the choice to return to a virtual learning environment crushed much of that hope. In the wake of these changes, many schools and universities have had to make difficult decisions in order to continue operating. Michigan State University (MSU) is no different. As of late September, more than 700 student employees of the Residential and Hospitality Services (RHS) department were furloughed. This decision left many without income or a backup plan and many are currently attempting to recover from this loss.

Taylor*, a current senior at MSU, has worked on campus for nearly two years under the RHS department. Unfortunately, she was also one of the nearly 700 MSU student employees who were furloughed in late September. Despite the severity of the information, Taylor initially learned of the furlough from another student employee.

During the official meeting to discuss the furlough, both Taylor’s boss and their superior were present to shed light on the situation.

“They both apologized for how it was happening. They said that the budget cuts were necessary. They gave us lists of jobs hiring and the official letter from MSU saying our last day was October 4th,” said Taylor.

Amidst this jarring news, Taylor inquired as to why there was a need for a furlough at all. Surely, the university needed student workers to help keep the campus operating. One of Taylor’s superiors was quick to offer an explanation, indicating that there was a sudden need for budget cuts for the department.

“She explained that RHS funds covered a variety of things, including the general fund and building renovations,” said Taylor. “RHS footed the bill of several current building renovations and actually went into enormous debt to have those buildings worked on. Basically, they chose to go into debt to renovate buildings, including those no one was living in this year, over keeping student employees.”

This news had quite an impact on many student employees. With the current COVID-19 global pandemic, it comes as no surprise that some budget cuts would need to be made at the university level. However, for student employees to know their inability to work and receive funds due to the university’s decision to prioritize unused buildings comes as quite a shock. Also, it was alluded that this decision was made to help preserve positions for full-time employees as well.

“I definitely felt betrayed and like I was just a number to MSU. I really feel like students are not a priority and it’s very money focused. I also felt like it was rude for us to be brought back to work for a month and then tell us we’re being furloughed,” said Taylor. “That put me in a really hard financial spot. I work for rent and for living expenses. I’ve applied to 15+ jobs and have a second interview on Friday, but still haven’t been hired because there’s now 700 of us looking for work in East Lansing and Lansing.”

“It was from our HR department. Someone I’d never met before,” said Alex. “His words were nice, but he didn’t seem very apologetic.”

Alex, like many others, was not initially surprised by the notice. As a service center employee, Alex typically worked in the north neighborhood on campus. However, they were recently moved to another location, not long before other drastic decisions were made.

“They transferred everyone to the south [neighborhood] and then started closing down service centers all over south,” said Alex. “I lost seven out of eight of my shifts every week before being furloughed.”

Much like Taylor and many others, Alex lost an expected portion of their income for the school year. The university itself is also on the losing end, potentially giving up the personal touch offered by student employees.

“The people doing the service center jobs now are our neighborhood coordinators,” said Alex. “The service centers will not have the personal touch of a student and most students may feel uncomfortable asking questions to middle-aged people rather than fellow students.”

The decision, to furlough nearly 700 student employees, left many without income and with additional stress. Despite the inability for these students to work on campus, they are still, technically, MSU employees. This means they may be able to return to their positions sometime throughout the school year. At the moment, RHS does not have an anticipated date for this return.

*Some names have been changed to protect anonymity

Sierra Jezuit is a fifth-year studying professional writing and English. She plans to work in the editing field after graduation, and hopes to share her passion for literature with the world. In her free time she can be found listening to all kinds of music, browsing netflix and writing poetry.