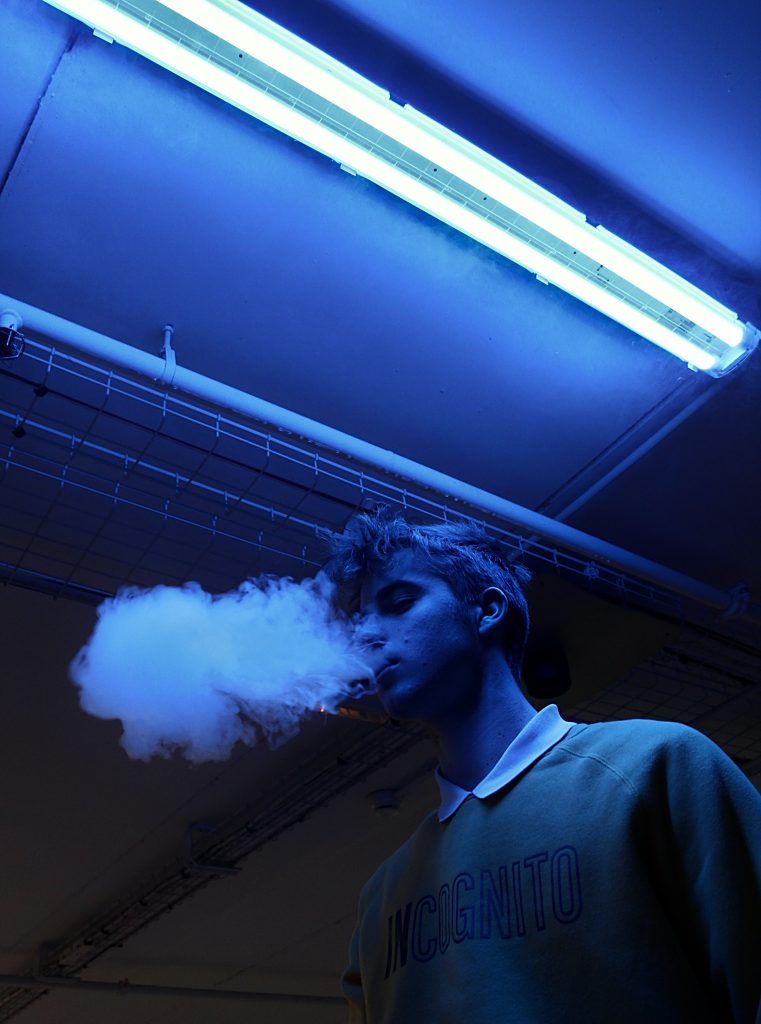 Vaping: the vice of the modern world’s youth. Back when our parents were young it was cigarettes, but in today’s technologically advanced age, vaping e-cigarettes has quickly become the new fad—and also the new public health concern.

Initially marketed to people trying to quit smoking “real” cigarettes, e-cigarettes have garnered the attention of young people through the notion that they are a less harmful alternative than smoking other forms of tobacco. E-cigarettes have had increased sales throughout the last few years, especially amongst high school and college-aged students. Following this gradual increase in young e-cigarette users, there has been a recent emergence of hospitalizations of young e-cigarette users due to serious illnesses caused by vaping. According to reports from the Center for Disease Control and Prevention (CDC), the majority of these hospitalizations were related to an outbreak of a lung disease called EVALI that is associated with the use of e-cigarette products. Many of the young adults hospitalized by EVALI took to social media platforms such as Instagram and Twitter to share their stories publicly in hopes of warning other young adults of the dangerous side effects vaping can cause. Recent reports from the CDC have shown that hospitalizations from vaping related products are now on the decline, but there continues to be a decent amount of cases still occurring each month.

Since these vaping devices have only been on the market for a short period in comparison to cigarettes, people are also unable to know the long term impact these products will eventually have on users. Despite the high level of risk presented by the use of e-cigarettes, people in younger generations are  continuing to buy and consume these dangerous products which pose another topic for discussion: could there be some other unprecedented appeal to vaping for high school and college-aged people?

It can be hard to imagine kids as young as freshmen in high school vaping, but that’s exactly when a large majority of e-cigarette users start. “People vape everywhere at school,” says Kathryn Pendleton, a high school freshman from the Chicago suburbs. “I see people vape in the hallways, in the bathrooms, even in class when the teacher turns away.” When asked why she thinks her peers continue to vape even at their young age, Pendleton responded, “I think people started to do it because they saw people older than them doing it and thought it looked cool, but now I think that they have gotten addicted. It seems like people will do anything just to rip the Juul.”

Pendleton’s theory relates to a recent study from Harvard Medical School that shows just how popular vaping has become in recent years. Results from the study showed that 37% of high school seniors reported that they were vaping in 2018 alone, a 28% increase from the previous year. The study revealed that middle school students are also adding to vaping’s recent rise in popularity as 3.6 million middle school and high school students reported using e-cigarettes in 2018.

If students as young as middle schoolers are now joining in on the vaping trend, it is only reasonable to assume that there is some other aspect to these devices that is notable enough to make them appealing, even to children. In an article from The National, professor Olivier Oullier breaks down the neuroscience behind the appeal of vaping, stating what makes e-cigarette companies such as Juul so popular, particularly amongst teenagers. It is “a dangerous combination of psychology, physiology and marketing.” Oullier explains that e-cigarette companies can persuade teenagers to buy their products by capitalizing on the public belief that vaping is safer than smoking cigarettes. By positioning their vaping devices as a way to give up smoking, e-cigarettes such as the Juul have begun to appear harmless to young adults because the company’s messaging has led them to believe their vapes are not dangerous like smoking is.

Oullier goes on to note another feature of vaping devices that could be the reason why young adults are continuing to use them, the innovative technology included in the design of many types of e-cigarettes. In today’s technologically advanced age, one can easily see why a vaping device that looks like a USB flash drive is enticing to teens. This aspect, applicable to the majority of vaping devices currently on the market, also helps younger users to be able to vape more discreetly, only adding to the appeal of these products to younger generations.

For college-aged students, similar to high school students, it seems the appeal to vaping is also largely due to the influence of peers who have made each other permanently hooked on using e-cigarettes. Jake Foy, a junior business student at Michigan State University, feels strongly that he is now reliant on e-cigarette devices, even after trying them just one time. “I started vaping because somebody let me hit their Juul when I was drunk my freshman year, and I really haven’t stopped since. For me, it’s not just a fun thing to do with my friends at parties anymore; I am definitely addicted.”

Foy also touched on the financial burden his addiction to vaping has caused for him. “When I was using the Juul, I went through at least two packs of pods per week. Just one pack of Juul pods costs me around $16, and over time, buying multiple packs of pods per week really starts to take a toll on the bank account. I’ve switched to buying disposable vapes now since it’s cheaper, and the flavors are better.”

Earlier this year, efforts were made around the country to try and reduce the amount of vaping done by young people. Michigan, amongst several other states, placed harsher restrictions on the flavors that e-cigarette companies such as Juul can sell to consumers in these states. For Juul specifically, the flavors of pods offered after the restrictions were placed were limited to only menthol and virginia tobacco.

“It’s just what people do these days,” says Dan Heilmann, a recent graduate from MSU. “Go walk into any of the bars on campus and you’ll instantly be surrounded by clouds of smoke. Kids won’t stop doing it unless they personally have a reason to.”

After reflecting on this information, Heilmann may be correct with his reasoning as to why the youth are continuing to partake in this dangerous habit. Even in the wake of a serious lung disease created because of vaping e-cigarette products and the result of hundreds being hospitalized, young adults are still choosing to vape. The decision these people are making to still partake in vaping after physically seeing the effects it can have on a person can no longer be treated as a defiance of authority by young people or as simply a bad habit. This decision is something more than that. It shows the blatant disregard that the youth have not only for others’ health but even for their own.

Kathryn De Vries (@kathryndevries) is an Advertising Creative junior focusing on a concentration in copywriting. Her passion for storytelling is evident amongst her various projects as a writer, editor, brand strategist and designer. When she’s not busy working, you can find her exploring her love for craft beer at any of the local breweries around the Lansing area.