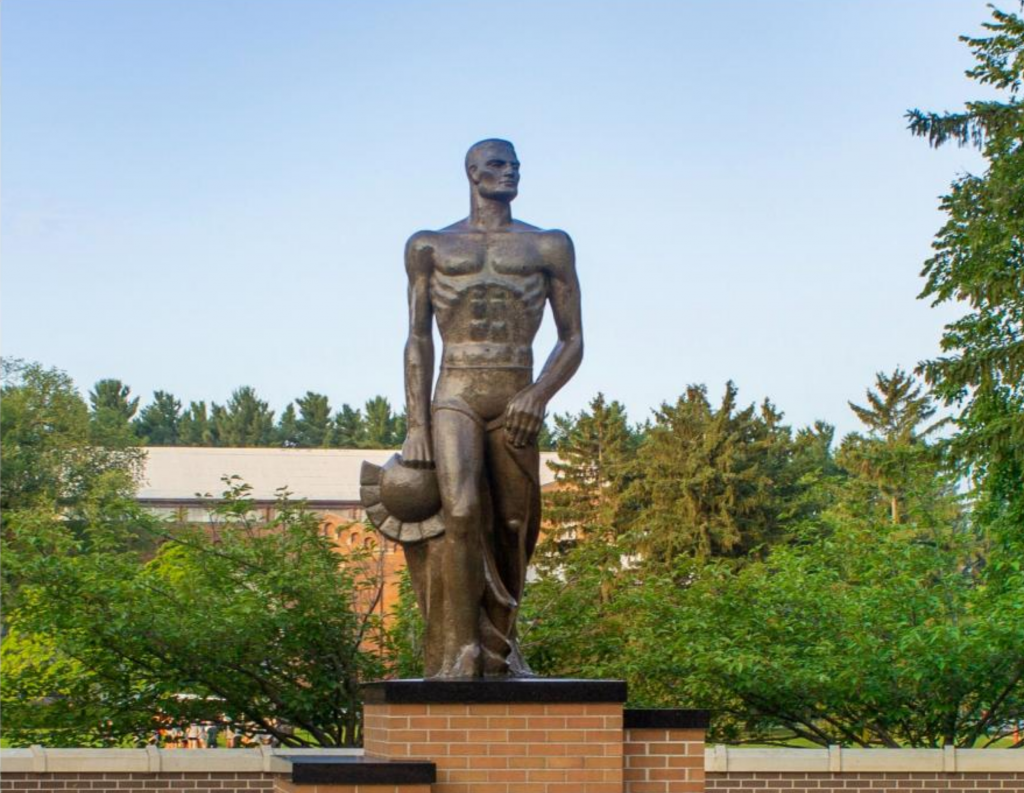 When searching for Michigan State University in the news, results will filter into two main categories: sports and scandal. Michigan State is becoming increasingly synonymous with the latter with an audience that stretches far beyond the confines of the mitten state.

MSU made national headlines beginning in 2016 when student survivors confronted their abuser in a retribution decades in the making. The perpetrator in this trial is a former MSU physician and USA Gymnastics national team doctor and has been accused by over 200 women, from MSU and beyond, of sexual abuse. The perpetrator’s name, following in the footsteps of the MSU Museum exhibit Finding Our Voice: Sister Survivors Speak, will not be included in this article so to prioritize survivors, for whom the name may resurrect trauma.

The perpetrator’s abuse went on at MSU and elsewhere for decades, and many reports were made by survivors in that time, all of which were ultimately ignored and covered up by MSU administrators. The most notable of which is former MSU President Lou Anna K. Simon. With the public discovery of the perpetrator’s crimes came evidence of Simon’s repeated covering up of those crimes, and yet she remained in office. Denying to resign despite outcries from students and faculty, Simon remained in office until forced out by a resolution from the state House of Representatives which called on the MSU Board of Trustees to fire her. Even in her “resignation” letter Simon refused to hold herself accountable, preferring to describe her blame as being “politicized.” This was not the beginning of MSU’s accountability problem and, unfortunately, nowhere near the end.

Casey Miles, professor and advisor to the professional and public writing program at MSU bears witness to how these occurrences weigh on students and her peers through her interactions with them.

About this scandal’s impact on students, she said, “Things like that pop up and you see how unsafe the learning space is. Thinking about being a young, undergraduate woman on this campus; they’re unsafe. If I ask a young student how they stay safe and their answer is that it’s on them: don’t walk alone at night, carry your keys as a weapon, protect yourself. But that’s not where responsibility lies, responsibility lies in teaching people not to sexually assault; not how to protect yourself from assault.”

MSU can certainly claim they’ve taken steps to protect students, such as introducing mandatory Sexual Assault and Relationship Violence Prevention Workshop (SARV), but these changes are seen by many as inadequate. There is something to be said of the in-person SARV courses which strive to educate students about sexual violence in a comprehensive way, but still the culture on campus remains unchanged.

Miles expanded, “The school does not do enough to educate young people about consent and sexual assault. They implemented these sexual violence courses, but most of them you can just click through them online. They paid a lot of money for these programs, but they aren’t actually educational.”

When the aforementioned scandal went public, it shone a light on the depth of misconduct at MSU and the administration’s reckless endangerment of the student body by way of turning a blind eye to their own failures. MSU’s sexual assault problem is so thoroughly malignant, it could easily fill the pages of this entire issue but, regretably, there is more to be discussed.

With no real institutional change to speak of, nearly the only acknowledgement students receive from administration when things go awry is the compulsory email from the president that spouts lines about a commitment to the community but never talks of real change.

Following the move to online classes and reports of xenophobia and racism seeping into online class meetings during the COVID-19 pandemic, MSU President Samuel L. Stanley Jr. sent out an email to the students and faculty.

Speaking on these issues, President Stanley wrote, “Not only should such behavior targeting individuals and groups by identity be strongly condemned, but it should also be reported to our Office of Institutional Equity. Our message has and continues to be that hate has no place at MSU.”

In the fall of 2019, hate most certainly did have a place at MSU, despite the cries of the administration’s campaign to the contrary, with a string of unpunished hate crimes committed against marginalized groups on campus. This surge of public displays of racism began when, in late October, a toilet paper noose was taped to the door of two black students living in Bryan Hall. Considering only four black people lived on that floor and theirs was the only door targeted, the victim of this crime, Iyana Cobbs, saw the incident for what it was: a hate crime.

Cobbs took to social media to say, “This was CLEARLY strategically planned because it’s knots in tissue. Do you know how upset and sick you have to be to make not one, but TWO loops out of tissue?! I just don’t understand it.”

The perpetrators of this act were found and claimed it was nothing more than a Halloween prank. One is left to ask: how could a crafted noose pasted on the door of some of the only black students in a hall not be construed as a violent act of racism? The answer is that it should be impossible to deny the racial implications of this so-called prank, but university administration knows nothing but the easy way out when it comes to issues like this. To dub this as a prank keeps the institution from doing the work of evaluating the safety of students of color, which the administration’s actions seem to neglect.

Not even a week later, a professor in the College of Communications Arts & Sciences, Saleem Alhabash, sent out a survey to students which was riddled with racist and otherwise offensive comments. The survey took comments directly from a multitude of social media platforms and asked students to rate their reactions to them. The professor included a disclaimer which warned some comments would be offensive, but students thought this warning was not enough. It is already far too much that students of these communities must deal with living on a campus already infested with prejudice and hate, but to receive a collection of such things from a professor through official university channels? At the very least, those in charge should’ve recognized how bad of an idea this survey was for a university already caught in a PR nightmare, but again, the university failed to protect its students.

Not long after, MSU’s Lester and Jewell Morris Hillel Jewish Student Center was vandalized and their sukkah—a temporary structure built for the celebration of a Jewish festival—destroyed. Official accounts for Hillel expressed gratitude for law enforcement and community support following the incident, but unfortunately these vandals are representative of a larger issue with anti-Semitism on campus.

Alan Shulman is a junior in James Madison College and the president of MSU’s group called SpartyPac. Shulman described them as a pro-Israel group which engages with other student organizations on campus, as well as the Michigan Congressional Delegation, to combat anti-Semitism on campus.

Shulman said, “I believe there is an ignorance issue [on campus], not necessarily a hate issue, though that certainly exists as well. More needs to be done by the school to ensure students are expanding their horizons and not trafficking in, whether intentionally or not, hateful speech and actions.”

Unfortunately, more was not done, and MSU made national news headlines again in early 2020 when a Black History Month display at the Wharton Center appeared to feature the lynching of black historical figures. The webpages on which official incident statements about this issue were published, are now no longer accessible online and when the links are clicked, it says “page not found,” which is questionable in and of itself. The statements claimed those in charge had no idea the display would be seen in such a light. These incidents only further proved to students that their safety and wellbeing is far from a priority for administration.

To return to President Stanley’s declaration above that incidents should be reported to the Office of Institutional Equity (OIE), the problem is that this office is so backlogged and overloaded from the complete flood of inequity on campus that such reports are extremely unlikely to receive due attention within the span of a student’s time on campus.

Shulman said, “I personally filed a report with the OIE on a class that trafficked in blatant anti-Semitism and made myself and several Jewish students in the class uncomfortable. This report was filed in January, and I have not heard back. After speaking with one of the VP’s of student affairs, I was told this is not normal and I should have heard back by now. This only adds to a concerning pattern of student concerns being swept under the rug.”

Speaking of her own experience with the OIE Miles says, “I have filed reports of my own with the OIE because students have talked to me about things, but from there I don’t know what happens.”

That an institution with such a glaring lack of integrity cannot cope with the sheer number of reports further speaks to the fact that this problem is not being handled. Students and faculty are left to wonder whether it’s okay to have any spirit for the Spartans when there is so much to be ashamed of. With any hope, that shame will weigh heavy enough on administration that change will one day come.

Shelby Smith is a junior double majoring in English and Professional Writing with a concentration in creative writing. After graduating, she hopes to pursue a career in the world of television writing. When not writing, Shelby can be found absorbed in a fantasy novel and a very large cup of coffee.