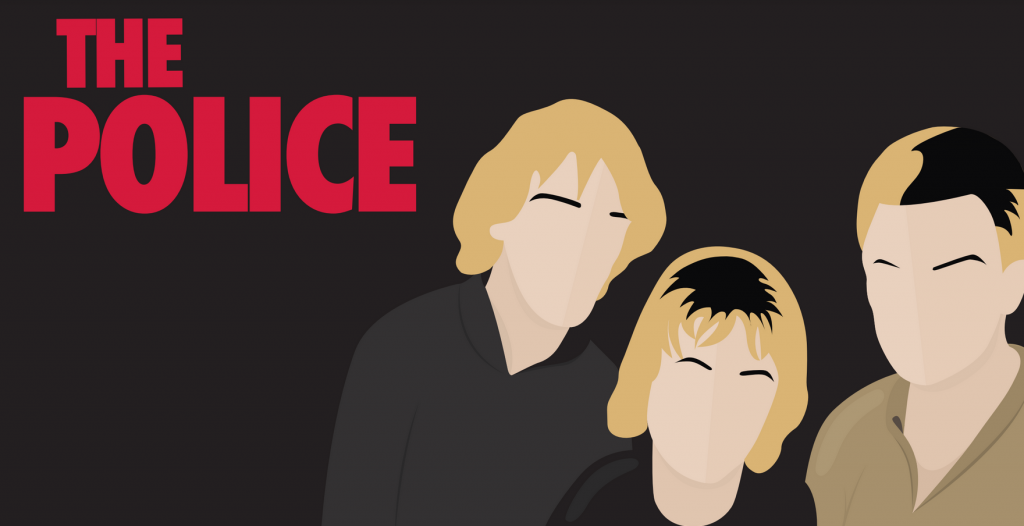 Let’s talk about the police. No, not them… I mean The Police, the British band. Calling all lovers of extended musical bridges, gnarly guitar riffs and three minute interludes that will make you wonder whether you’ve been transported to another time, place or era.

The Police, the English rock band, was established in 1977 in a little town across the pond called London. With Stewart Copeland on percussion, Andy Summers on guitar and bass player, Sting, as lead vocalist, this three man ensemble can be best described as the musical manifestation of rock and reggae’s love child. During the late 70s and early 80s, The Police would sell 100 million records, go on five world tours, earn six Grammys and compose 13 Billboard Top 100 hits. One of the hits, “Every Breath You Take,” would spend a total of 22 weeks on the Top 100 chart,peaking at number one on July 9, 1983.

Majority of The Police’s catalog is catchy, relatable and fun, centering mainly around things like love, finding one’s way and societal woes. One could definitely categorize The Police as lovesick fools, producing songs like “So Lonely,” which was an anthem dedicated to those who’ve recently experienced heartbreak. Some of their other lovesick anthems include, but are not limited to, “Hole in My Life,” “Can’t Stand Losing You” and “Roxanne”.

The Police are also the kings of metaphor and imagery; they employ both heavily. For instance, in their song “Message in a Bottle,” they describe themselves as castaways on an island lost at sea. We later find out they are comparing their singleness to that of being stranded on an island. They then go on to compose and send a “message in a bottle,” desperately hoping someone will come to “rescue them,” from their singleness. Towards the end of the song, they sing:

“Walked out this morning, I don’t believe what I saw

A hundred billion bottles washed up on the shore

Seems I’m not alone in being alone

A hundred billion castaways looking for a home”

Here, they recognize that not only are they not alone when it comes to feeling the woes of singleness, but numerous others are desperate to find love as well. This lends to an optimistic conclusion, giving hope to fellow lovesick romantics searching for their soulmates. Similarly, this group uses imagery and metaphor in tracks like “Walking on the Moon,” referencing the light-as-a-feather feeling love elicit and various others.

Overarchingly, much of this group’s catalog deals with topics like political issues during the 70s and 80s about commercialism, to even schoolgirl crushes in “Don’t Stand So Close to Me.” Due to The Police’s heavy influence within the genre of rock and the timelessness of the overarching themes within their music, their music is definitely something that should be kept alive.

Want more of The Police? Click here to listen to a Spotify playlist I’ve compiled showcasing some of their greatest tracks.

Aleaha Reneé is a senior marketing major with a passion for magazine journalism. She currently authors a column entitled The Face Of, established with the primary focus of encouraging self-actualization within individuals. One day, Aleaha Reneé will become a columnist, editor and ultimately editor in chief of a magazine. When she is not working you can find her surrounded by her dearest friends, binge watching “New Girl” for the billionth time, or mentoring Spartan underclassmen. Follow her on Instagram or Twitter @aleaha_renee