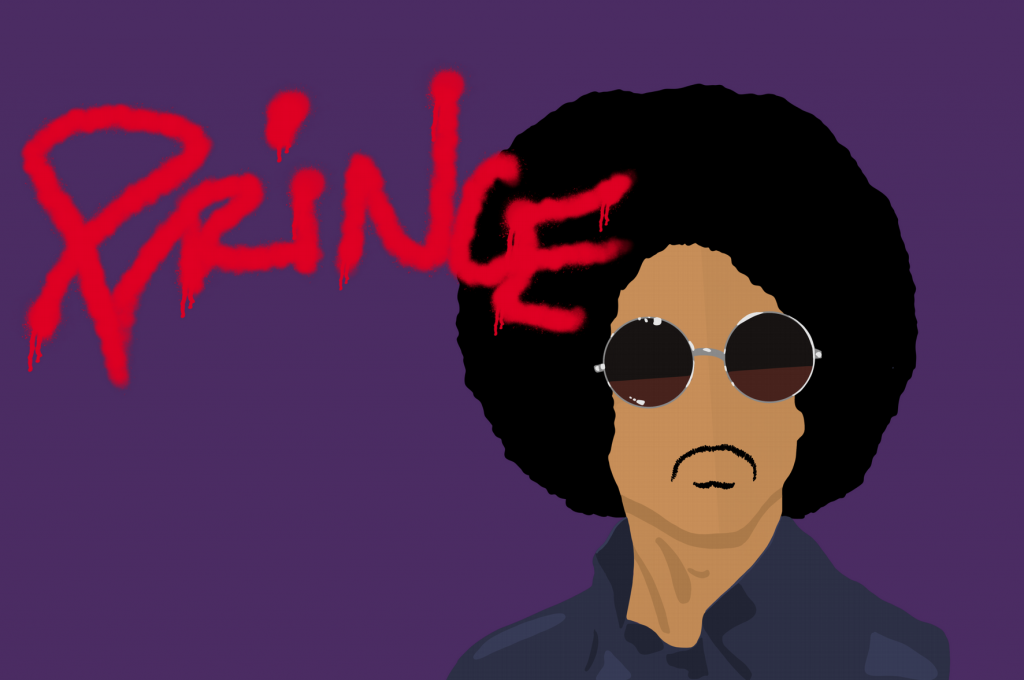 Prince was born on June 7, 1958 in Minneapolis, MN. Best known for his 1984 hit Purple Rain, His Royal Badness  recorded 39 studio albums and won an Oscar and eight Grammys over his career. The catalog of his music can be best described as a conglomerate of R&B, techno, pop and rock. His career spanned roughly 40 years and before his death in 2016, he produced 47 Billboard Top 100 hits.

It’s hard to not think of the High Priest of Pop when 80s music is mentioned. The whimsical and, at times, seemingly confusing audio mixes he produced can be overwhelming at first, but they always mesh perfectly in the end. For example, within the first 30 seconds of his 1987 song If I Was Your Girlfriend are the sounds of a symphony, then a sample of Mendelssohn’s Wedding March and finally the angelic voices of a choir. Ultimately, the song breaks into a rhythmic beat accompanied by harmonics. Sounds chaotic right? Trust me, he made It work.

The Purple One’s iconic falsetto, as well as the violin, electric guitar and saxophone solos present on tracks like Nothing Compares 2 U and Let’s Go Crazy are only part of the reason his music had a monumental impact on 80s music. In terms of overarching themes throughout Prince’s music, they usually revolve heavily around finding love and regaining the affections of ‘the one that got away’. Some of his music also conveys the woes of maintaining relationships, including my personal favorite song: When Doves Cry.

Like all great musicians, the Prince of Funk used imagery and storytelling within his music. For example, in Raspberry Beret, he describes the exact moment he laid eyes on the woman he claims to be his soulmate. He sang:

“I was working part time in a five-and-dime

My boss was Mr. McGee

‘Cause I was a bit too leisurely

Seems that I was busy doing something close to nothing

But different than the day before

That’s when I saw her, ooh, I saw her

She walked in through the out door, out door”

One can probably guess what kind of hat the woman he spotted was wearing. Nevertheless, these few lines describe an everyday encounter that unexpectedly transformed into love at first sight and, throughout the rest of the song, lover’s bliss.

Want more Prince? Click here to listen to a Spotify playlist I’ve compiled showcasing some of his greatest tracks.

Aleaha Reneé is a senior marketing major with a passion for magazine journalism. She currently authors a column entitled The Face Of, established with the primary focus of encouraging self-actualization within individuals. One day, Aleaha Reneé hopes to become a columnist, editor and, ultimately, editor in chief of a magazine. When she is not working, you can find her surrounded by her dearest friends, binge watching “New Girl” for the billionth time, or mentoring Spartan underclassmen. Follow her on Instagram or Twitter @aleaha_renee