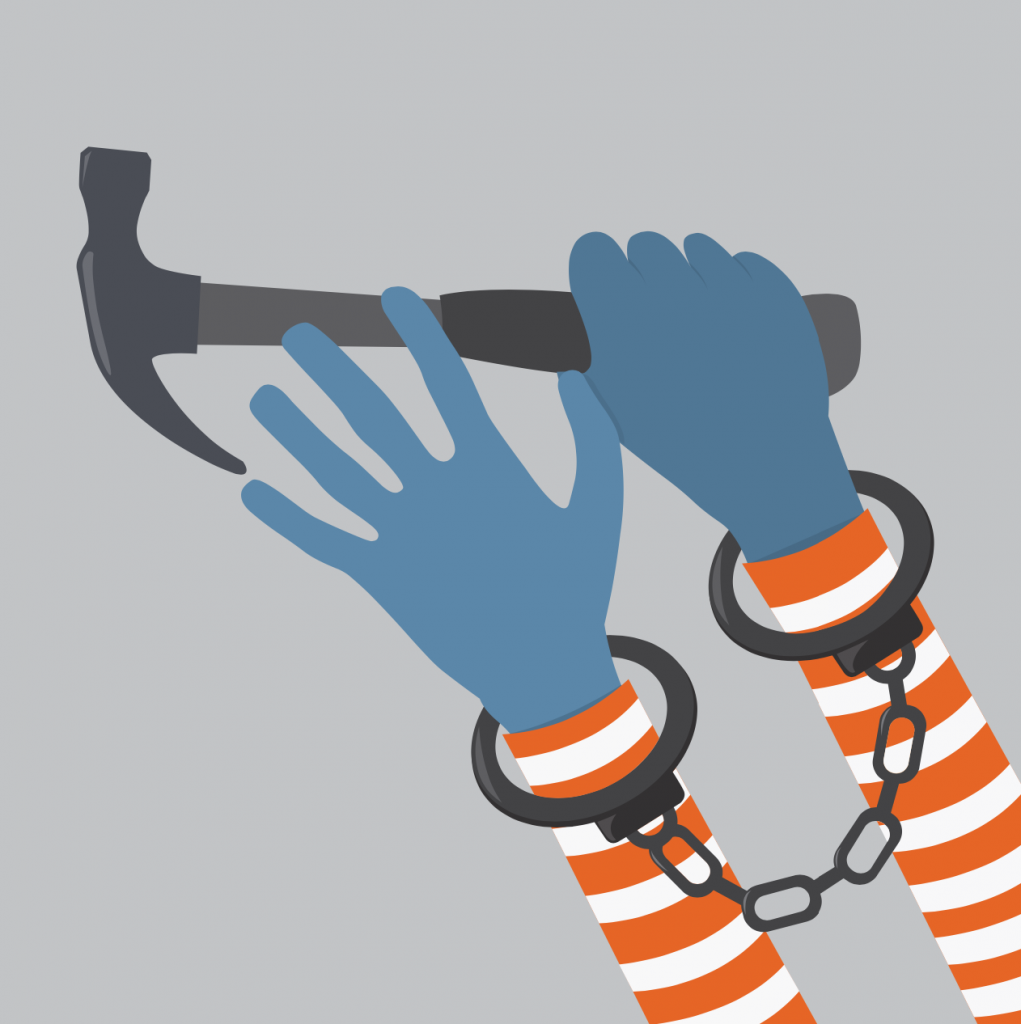 Prison—one of the places that one would least expect to harbor profitable jobs. Behind the solid walls of America’s many prisons (there are nearly 2,000, according to the Prison Policy Initiative) lie the ideal for-profit industry. The workforce is constantly replenishing and can be paid the barest fraction of the minimum wage. It’s a businessman’s dream, if the moral obligations are set aside. Sure, prison labor may be the modern-day equivalent of indentured labor in America, but it’s cheap, and for many corporations and local governments, it’s easy enough to overlook the moral issues in favor of the low prices.

According to the Prison Policy Initiative, only about 1% of inmates are employees of private companies, and only about 6% of inmates are employees of the state. However, many figures on incarceration are disputed, making it hard to tell how many working prisoners there really are. The Bureau of Justice puts the number of inmates in the U.S. at somewhere well over one million as of 2018, though more recent reports say the number is closer to 2.3 million. Figures about the number of inmates who work are just as hotly contested, with an anonymous source telling Newsweek that, by the source’s estimation, about half of prisoners work.

The Bureau of Prisons, an offshoot of the Department of Justice, is responsible for the incarcerated population. It also operates Federal Prison Industries (FPI), a corporation owned by the United States government, and the employer of many incarcerated workers. FPI is limited in who it can sell to—since FPI’s use of prison labor means it doesn’t have to pay the standard minimum wage, it would be capable of undercutting any company in the private sector. The vast majority of FPI products can be sold only to the federal government. Since FPI is government-owned, prisoners spend their days creating uniforms, road signs, mattresses, helmets, armor and more for the government that they are prisoners of. This is billed as a positive by proponents of the system: inmates are giving back to the nation as a way to atone for their crimes and give back to society.

However, the inauspicious roots of prison labor hint at its less palatable purpose. The 13thamendment was passed in 1865, shortly after the Civil War ended. By stating that “neither slavery or servitude[…]shall exist within the United States.” It emancipated tens of thousands of slaves. Especially in the Southern United States, this created a sudden absence of workers and a need for a new source of cheap labor. The amendment had an answer for this: “…except as for a punishment for crime.” Thus, the same amendment that freed so many slaves was used to reconsign them to a supposedly just form of slavery, under the name of convict labor.

In the years after the amendment, Black men—and, to a lesser degree, women and children—were convicted on petty and often trumped-up offenses such as being unemployed that forced them back into laboring without a fair wage. Today, disproportionate jailing of racial minorities and vulnerable populations continues. Research published by the Council of Criminal Justice in 2016 showed that African Americans often serve more time than a white American convicted of the same charge. The American prison system, and the labor it forces on inmates, remains influenced by racial bias.

The 155-year-old wording of the 13th amendment had provided a legal loophole that has enabled prisons to make an estimated $500 million in profit a year off the backs of their inmates, according to NPR. The NAACP estimates that America contains 25% of the world’s incarcerated population, though America constitutes less than 5% of the global population. America has a large source of workers with little choice in their own employment, and for more than a century and a half, those willing to turn a blind eye to moral questions have been making a fortune through this system.

Prisoners have no ability to disagree with their employment—it’s not as though they can seek employment elsewhere. If inmates want to work, they have to work in the conditions, and for the wages, that are offered. Prison labor takes advantage of the convict’s inability to unionize or seek higher pay. Those who work outside of prison walls have bargaining power, because they can seek other employment if terms are unsatisfactory. Prisoners are not afforded this freedom. Because inmates can’t seek a better job, they can be exploited far more easily than the non-incarcerated population.

Typically, inmates perform tasks essential to the day-to-day running of their prison, such as laundry and maintenance duties. They also produce goods for outside use, like clothes, furniture and farm goods. The work is often far from stimulating. The majority of working inmates perform manual or so-called unskilled labor assignments to supply various branches of government, since their employer, FPI, is restricted in whom it can sell to. While most inmates are consigned to internal manual labor, some have the misfortune of working under downright dangerous conditions.

Prison labor sprung into national consciousness during California’s 2018 wildfire season, where convicts were brought in to help fight fires for $2 a day. NPR reports the use of inmate labor saved the state $100 million a year. (For reference, Zip Recruiter estimates that a non-convict firefighter makes nearly $100 a day, due to the danger and rigors of the job). In New Jersey, where the minimum wage is $10 an hour, prisoners working in maintenance can earn, at most, $2 an hour. Across the nation, prisoners earn between 86 cents and $3.45, not per hour, but per day, according to a study by the Prison Policy Initiative. Depending on the state, some prisoners receive no compensation at all. Many prisoners must use their money to spend on things like shampoo, razors, stationary, and phone calls. Female inmates in particular are at a disadvantage since many have to purchase essential menstrual supplies. The wages paid to prison laborers directly affect the inmates’ quality of life.

Proponents of the prison labor system argue that prisoners deserve the lack of choice. They violated societal rules and, as a result, have lost the right to make choices for themselves. However, this logic relies on two premises, neither of which are argumentatively sound. The first assumption is that every person in prison is guilty. This is supposedly why it’s fair for prisoners to have no say in their labor and be deprived of the wage offered to those who have followed the laws of society.

As a certain amount of bias, conscious or otherwise, is present in everyone, bias is surely present in the justice system. A study conducted by Ohio State University estimated that 0.5% of convictions are wrongful. This seems like a small figure, but on the large scale of American incarceration, it becomes unfair to subject all prisoners to the lack of freedom of prison labor. Reports on the incarcerated population conflict, but it is estimated to be near 2.3 million people, meaning that as many as 11,500 Americans may be innocent but incarcerated. Even if violation of the social contract justifies subjecting people to a lack of free will over their employment, there are innocents in the prison system, who have not violated laws, and it is therefore unjust that they also lose these rights.

The second premise is that everyone in prison is equally guilty—e.g., someone who possessed marijuana and someone who comitted murder deserve equal punishment. If both of these prisoners are working in the prison labor system, then both are being equally deprived of free will, despite having committed disparate crimes.

If prison labor is to be a valuable tool that allows convicts to do meaningful work and “contribute to society,” then the labor they perform has to be shown a modicum of respect. Prisoners understand that they, and their labor, are being undervalued because of their circumstances. This lowers morale and self-worth, worsening the quality of life for those who are likely already at a low point. Proponents of prison labor claim it helps convicts see themselves as a productive part of society. Undervaluing their contributions by paying them a pittance does the opposite.

Prison labor relies on the idea that work somehow has less value if it is performed by a convicted criminal. Outside of prison walls, pay rates are far higher for identical work, and employees have far more choice about what they focus their labor on. Inmate labor is the dirty secret that keeps prisons running and people profiting at the expense of those who are already more vulnerable due to being separated from the rest of the world. The 13th Amendment quietly allows the U.S. to consider prisoners as resources to be capitalized on, rather than people working towards rehabilitation.