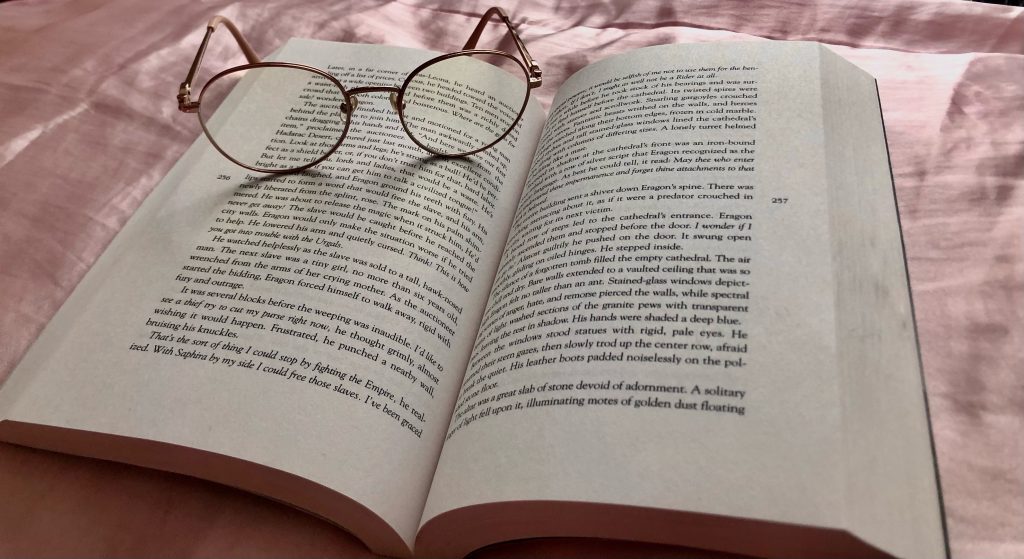 “Eragon” is a must read for those who are in love with losing themselves in fantasy worlds written down on paper. Not only is this book intriguing, but so is the author himself and the aging ideas of what lies beneath the pages.

The “Inheritance Cycle” was written by Christopher Paolini, who began writing the four book series when he was only 15 years old. “Eragon” was the first of the series, and its first edition was self-published in 2002 but was published again in 2003 under Alfred A. Knopf.  It was the #1 New York Times bestseller and a worldwide phenomenon.

The fantasy book takes the reader into the mystical world of Alagaësia. A young farm boy named Eragon finds a fancy “rock” that really turns out to be a dragon egg. This egg is the start of an adventure Eragon never anticipated taking, turning his life into something he never thought he would live.

From the year 2002 to 2021, “Eragon” has aged to almost mimic what has happened this past year and really allows the reader to connect to the story in a new way. An escape for the minds of young and old, this book helps to take someone away from the craziness they’re experiencing. It connects to all the things people have had to live through — isolation, a questionable leader, fear — over these past months.

Eragon’s new life forces him to go into hiding, especially from the king, who is cruel, vicious and power hungry for what Eragon’s egg offers. That fear of the world coming completely to an end is always there throughout the tale, which resonates well with needing to isolate from COVID-19 and from our past president. This book was not written during these times, yet it allows its readers to feel less alone and lost in a world they can’t control.

One special feature of “Eragon” is the inclusion of the map of Alagaësia so that the reader can visualize where this story takes place. Along with the map, there is a glossary of the ancient language that is used throughout the book. Having that little glossary in the back allows the readers to really understand parts of the book that may have caused them confusion or interest. They are not left in the dark and even get to know a bit more about this ancient language than the main character does.

Overall, “Eragon” is an escape from what was faced in the year 2020 and serves as a reminder that fear can keep you inside and trapped forever. Through its characters and plot points, the book grabs the reader and pulls them through the story, never wanting to stop. With three others to follow — “Eldest,” “Brisingr” and “Inheritance” — what will come next?

Jenna Merony is a senior pursuing a double major in professional writing and English with a concentration in creative writing. Her plans after graduation involve graduate school to get a M.A. in creative writing and possibly write a poetry book during that time. After graduate school she hopes to work for a publishing industry as an editor. In her free time she likes to read, run and write poetry.