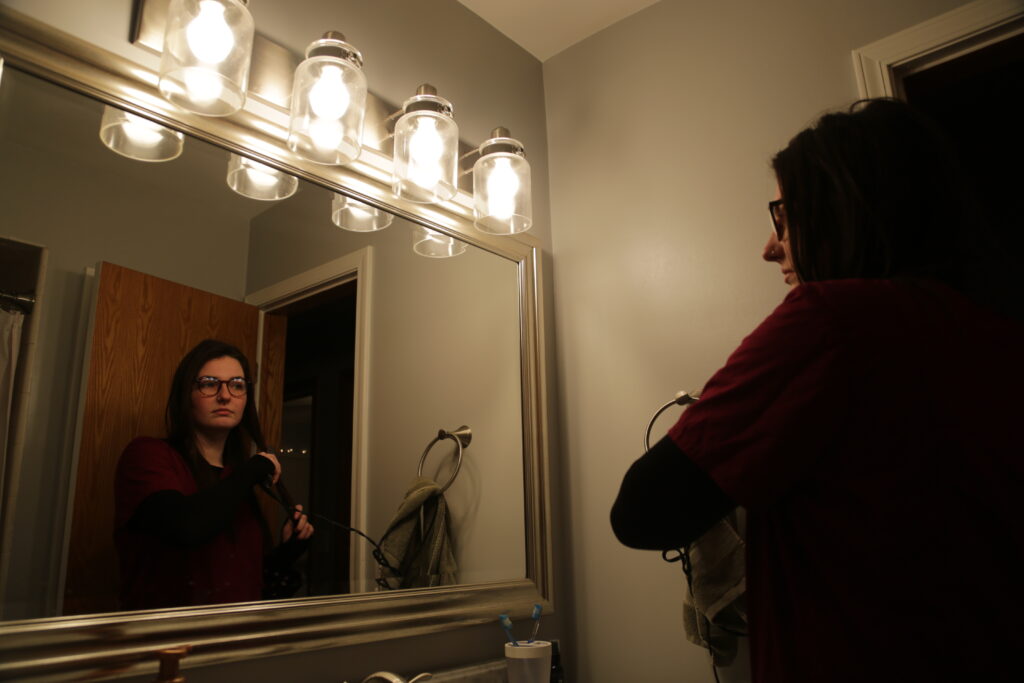 It’s 2:30 p.m. in Holland, Michigan. Across the city, Hope College students prepare for their next in-person class, Zoom lecture or mid-afternoon nap. Meanwhile, Gabrielle Hoffman, 20, prepares for a long day at work.

Previously enrolled at Oakland University, Hoffman transferred to Jackson College during her sophomore year. She now works at Holland Hospital after resigning from college altogether. Just miles down the road in the center of town is Hope College. The students of this liberal arts college make up roughly 10% of Holland’s population.

With enrollment numbers like that, most Holland residents are connected to Hope College in one way or another—whether they like it or not. Hoffman is no exception.

“I just ran into a Hope College student earlier today,” Hoffman said when asked about her experience living in a college town as a working young person. “When I see [students] in groups studying, part of me is like, oh, maybe I shouldn’t be out of college right now. I often think of like, oh I’m gonna be behind all my friends when they all graduate in 2022 [because] I won’t be graduating.”

Hoffman is currently living with her parents and is unsure of her future plans. However, she sees no shame in taking some time to figure out what she wants to do before spending time and money on a degree.

“I one hundred percent think you can be successful without having a degree. I think in this generation it’s like ‘oh you just need a piece of paper, it doesn’t matter what you get your degree in.’ Which I don’t think is right. Why go to college and spend thousands and thousands of dollars for a degree that you don’t even want? You just feel like you need a piece of paper.”

Hoffman has witnessed others in her life reach success without a degree.

“My dad’s best friend didn’t go to college and he just sold his company for millions of dollars,” she said.

Kelsey Duchene, a 19-year-old LCC student living in East Lansing, thought nothing of her choice to attend LCC instead of MSU—at first.

“My parents always wanted me to start off at a community college to save money and I never had a problem with it,” she said. “Then freshman year of college I started hanging out around a lot of MSU students, and on MSU campus and I realized that we were living what seemed like totally different lives.”

Kelsey was a full time student, working a part time job, and living at home.

“All of my friends at MSU got to live and hangout with friends everyday, always participate in fun events, hobbies and game days on campus, and it felt like I was missing out on all the fun.”

However, in hindsight, Kelsey does not regret her decision to go to LCC.

“Looking back on it I wouldn’t have changed my decision on going to LCC,” she said.

“After a while, being so close to MSU and meeting new people, I started to feel included in all the fun the students there were having. Now I love living in East Lansing and always meeting so many new people from all over the world. The MSU community has been very welcoming and I think it’s an awesome privilege living so close by.”

Jordan Harris, a 19-year-old East Lansing resident, is not phased by the college-centered environment that surrounds him.

“I’ve been living in Lansing for about a year, and I’m not really a huge fan of the party vibe,” he said. “But I like how it’s been, and I’ve been able to meet a lot of new people and make friends.”

Although he is not an MSU student, Harris is still able to participate in East Lansing social activities and knows he can always find something to do on the weekends if he wants to. However, Harris has a very busy schedule, taking classes six days a week at Lansing Community College, where he is enrolled in the aviation maintenance program. When he is not in class, he works 16 hours a week at a tractor supply company.

In the next five years, Harris hopes to be “working 3rd shifts at Delta Airlines and trying to get [his] private pilot’s license.”

Harris once again exemplifies going after your dreams without a four-year college degree. As Hoffman said, it’s not about the piece of paper, but rather, about your motivation to be successful.

“If you don’t have any motivation, then it’s gonna be hard.” she said. “I think it can make it easier, but I don’t think everyone should keep that stigma of ‘you need to go to college if you don’t want to… live in a box,’” she said.