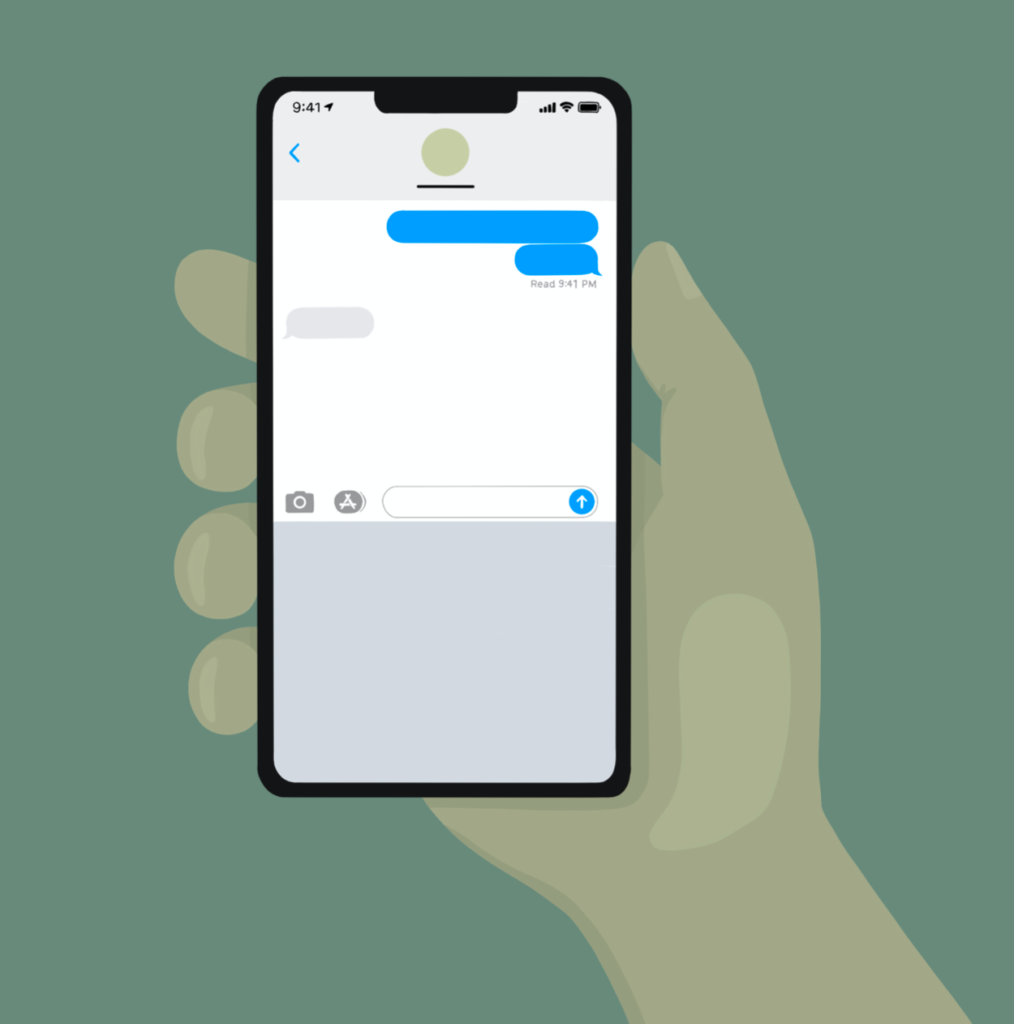 Seen. The four letters appear on your phone screen. Your heart skips a beat as you wonder, what does this mean? Are they ignoring me on purpose? Are they upset? Though it may be as simple as an opened message, these four letters can cause unwanted stress to anyone who sees them.

This is one of the many reasons why communication over text may not be the best choice. Texting replaces face-to-face interaction, eliminating emotion, tone of voice and facial expressions. In-person communication gives individuals the opportunity to truly communicate with one another, giving a greater understanding to the meaning behind the words being vocalized.

Maggie Mulqueen, a psychologist and writer for NBC News says, “Our increasing preference for texting over email and phone calls creates a higher quantity of interactions, but it decreases their quality, harming our relationships…it’s missing the human contact and learning that comes from true dialogue.”

Though it’s easy to send a quick text message, human relationships are not being significantly enhanced—if anything, they’re being damaged. Texting is still a form of communication, but it is not the same as talking directly to another person and gaining the “true dialogue” that comes with in-person interaction. Moreover, other prevalent drawbacks that arise as a result of communicating over text are discussed below:

Most people know the awful feeling that comes after getting all dressed up for a meeting with a friend, feeling excited to see them and go out. Then, a text appears that says, “I’m sorry, I actually can’t make it tonight. Let’s reschedule.” Though the message may seem like a valid apology, how can one know that for sure?

When reading text messages, an individual isn’t able to hear the tone of someone’s voice or the sincerity of an apology. It’s easy to type, “I’m sorry,” without putting thought into the words being sent. This leaves one to wonder if they truly mean it. When talking in-person, the emotion in someone’s voice is better expressed. It’s easier to tell that they’re genuinely sorry and not just cancelling at the last minute because they never wanted to go in the first place.

In today’s generation, the use of punctuation can bring forth negative connotations. For example, there is a debate about the use of the period. According to author Hannah Frishberg from the New York Post, “While older texters may consider the period an innocent symbol that a sentence has ended, digital natives consider it a triggering form of aggression.” So, while the sender may just be ending a sentence with a period, others may take it as a signal of frustration or being upset.

This is evident in responses such as, “Ok.,” or, “That’s fine.” When used with short sentences, the period makes words look abrupt or, as Frishberg says, “aggressive.” However, when the period is used with multiple lengthy sentences, its connotation is that it simply ended the sentence.

Moreover, usage of capital letters in texting has been seen as a portrayal of anger or yelling. For example, compare the effect of  “finish your homework,” with, “FINISH YOUR HOMEWORK.” The lowercase version appears to be a more casual and relaxed statement while the uppercase version takes up more space on the page. The letters are also heightened, aligning with the idea of a voice being raised.

When texting, it is important to pay close attention to the ways in which words are written. Added punctuation or a slight change in the look of words can bring forth negative meanings, even when they are written with good intentions. Verbal communication would eliminate these miscommunications that arise over text.

The length of a text message can cause unnecessary overthinking. Many individuals may fear that they are coming off as annoying or desperate when sending more than one text message at a time. Double texting, or sending two messages back to back, is equally as bad as sending one long message. For that reason, it is common that an individual may limit their response length, therefore not truly communicating everything they want to say. This is harmful in that it strips an individual of their voice and confidence.

Moreover, there is a constant pressure to respond in a timely manner. In a USA Today article that discusses proper text message response time, etiquette expert Elaine Swann says, “After the 48-hour mark, if you really haven’t said anything at all and someone asks you a question that needs an answer, then that’s where you’re starting to get into… rudeness or inconsideration.” There is pressure in receiving important text messages, for if a response is not made quickly enough, an individual may begin to believe that they are being ignored, or rather unimportant.

Sometimes people forget to respond to a message or don’t have time to formulate a carefully crafted text that follows all the rules above. However, to the sender who is waiting anxiously by their phone for a response, they will most likely wonder why the recipient is ignoring them. The difference with conversing in-person rather than over text is that a response is most often guaranteed right away, as another individual. But, conversing over text creates ample time to cultivate and send a response. Sometimes even too much time.

What Does All of This Mean?

Moving forward, texting is not something that will disappear from people’s daily lives. Texting is a quick form of communication that helps maintain relationships for many. Texting can be fun and exciting; however, it requires an awareness of the miscommunications that may arise.

Individuals who are well aware of texting rules stress over sending the perfect text message. Many people often spend too much time crafting a message and adjusting how they text to match their style to those they are communicating with. Although texting should be seen as something that makes life easier, it often adds unnecessary pressure to daily living.

As Mulqueen says, “Conversations that allow me to hear your voice, see your expressions and support true dialogue are still the gold standard for bringing us closer.” It’s time to cut down on screen time and spend more time communicating face-to-face. This will lead to better personal connections and understanding that texting unfortunately lacks.

Rachel Huculak is a senior majoring in English with a focus on creative writing. After college, she hopes to work in the publishing industry as well as create poetry and stories of fiction. Her dream is to publish a book as well. Rachel’s interests include creative writing, playing piano and spending time with her family and friends.