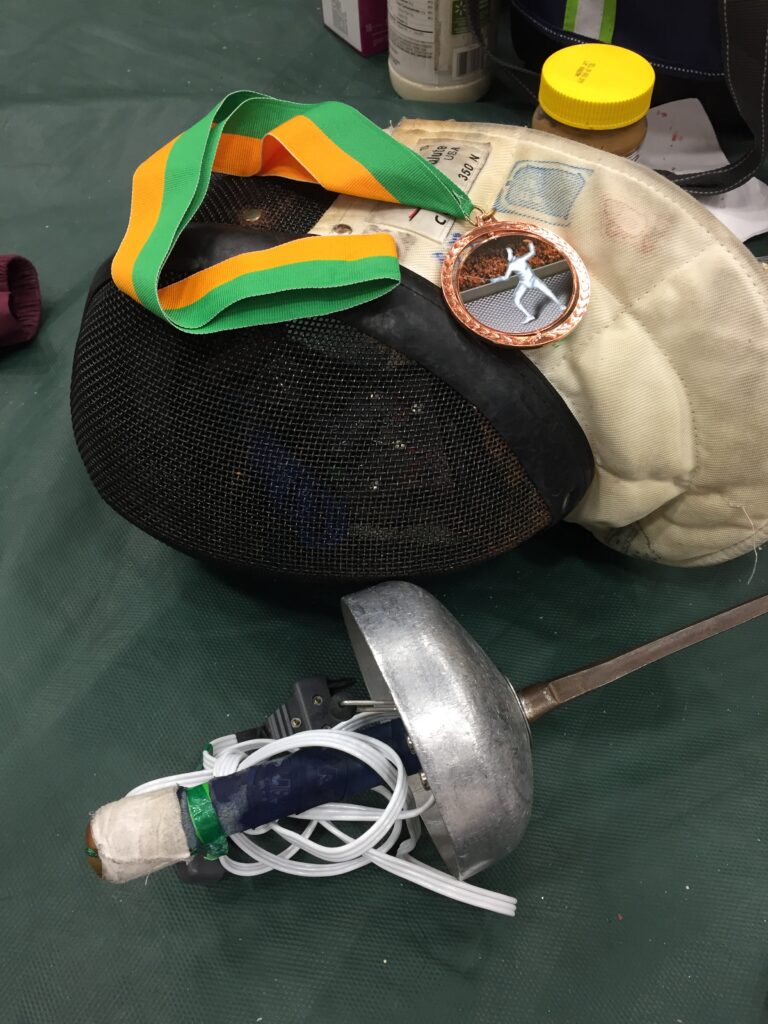 Two athletes in white protective gear and wire masks spring off the line and begin a game of cat and mouse to see who will hit the other with their weapon first. When a hit is scored, one person will get a point, and that continues until a final score is reached. The sport is fencing, which has been lovingly dubbed “chess at 100 miles per hour” because of the combination of strategic and athletic skills it requires.

The sport is easily recognized because of the distinct customary white protective gear and wire masks, but beyond that, there is a surprisingly rich history that goes back centuries. Fencing as it is known today grew from various iterations of military training dated back to 12th-century B.C.E. Egypt, where bas-reliefs of masked men fighting with bronze-tipped sticks were carved into temple walls.

Sword fighting was a prominent part of daily life and entertainment in both Ancient Greece and Rome and was certainly a part of the Ancient Olympics cir. 776 B.C.E.

Fencing has been an Olympic sport since the start of the Modern Olympiad in 1896 and was featured at every Olympiad since. Now, there are 3 competitive weapon categories (Epee, foil, sabre) offered for both individuals and teams, with competition opportunities for all genders and ages.

Fencing is an incredible sport because of its inclusivity. It promotes involvement at any age and ability, from childhood and veteran fencing to wheelchair fencing and non-athletic participation (e.g., refereeing, results, and IT). Wheelchair fencing has been featured since the first Paralympic Games in 1960.

Opportunities for involvement are widespread: U.S. Fencing has over 600 clubs nationwide, and there are thousands more worldwide. The sport also exists in both an NCAA and college club capacity as well.

Although offering it as a university sport elective is no longer commonplace, many colleges and universities have had a long history of the sport. Michigan State University has photos of women’s fencing dating back to 1926, and their fencing program is still in operation today.

“Fencing is one of the most inclusive sports I’ve ever participated in, and it’s because everyone’s allowed to fence in their own individual way,” said MSU club fencing President Jake Iwankovitsch. “Everyone fences differently based on their strengths, which allows many different kinds of people to compete.”

Fencing is also an inclusive sport in terms of gender and sex. The rules and regulations between men’s and women’s fencing are the same. Events are sometimes separated by gender to accommodate bigger tournament numbers, but there are no specific rules of play dividing the genders in the sport. Women are required to wear different protective gear than men, due to their difference in anatomy, but fencing events are run the same regardless of gender.

Unfortunately, women’s involvement in professional fencing was historically slower to develop; Women’s Foil was included in the 1924 Paris Olympic games, but Women’s Epee and Sabre did not make an Olympic appearance until 1996 and 2004, respectively.

That being said, women were participating at the collegiate and recreational level for many decades before Olympic presence was established.

“Starting to fence completely changed my perspective on competitive sports. All of the other sports I played were strictly separated by gender, but at my fencing club and tournaments I have the opportunity to fence with everyone,” said MSU club fencing Vice-President Emily Lin. “It’s a unique sport where everyone can compete and learn from each other without barriers—not just because of the sport itself, but because the community and design of competitions gives the opportunity to do so”

Fencing is inclusive beyond the binary as well. Many trans and gender nonconforming athletes have had long and successful careers in fencing all the way up to the national level. As with all things, there is always room for improvement on gender policy, but fencing is one of the more inclusive sports for trans and queer-identifying athletes.

Fencer Jamie C. (they/them/theirs) joined a college fencing club because of its open attitude towards all types of people. They said that they felt immediately welcomed and weren’t singled out because of their queer identity. If anything, it was a point of bonding for the team.

“I felt safe, I had friends, I was staying active. That’s something I might not have had in another intramural sport.”

When competing, Jamie feels most comfortable at mixed events because there isn’t an emphasis on the binary: “I just go out and fence the way I know how to.”

Fencing is one of the few sports that creates opportunity for mental and physical exercise while putting very little stock on appearances, which is sorely needed in the world of athletics. The sport allows for all body types and abilities because there is no single advantage in either height or weight. There is no “ideal body type” to be a fencer, and you can compete as long as your health allows you to.

In fencing, participants are not bound to any specific weapon, event, style, mobility, equipment or team, and everyone can tailor their experience to be as competitive as they want. Fencing is the sport for everyone.

C. Rose Widmann (they/them) is a fifth-year senior pursuing B.A.s in English and theatre with multiple minors. This is their first semester with The Current, but they have been a contributor for HerCampusMSU since May 2020. C was most recently published in Otherwise Engaged: A Literature and Arts Journal. When not writing fanfiction or fantasy novels, C is competing for both the MSU club fencing and gymnastics teams. Insta: @C.rosewidmann