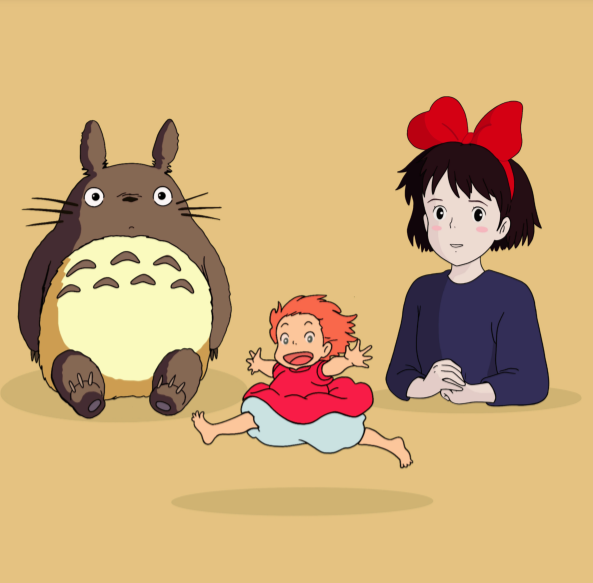 Studio Ghibli is one of the most famous animation studios in Japan and their fame has expanded out into the rest of the world. Since it was founded in 1985, Studio Ghibli has produced 22 films as its own company (with another currently in the making), has partnered with other studios to produce even more movies and has even made cutscenes for video games, most notably in Ni no Kuni: Wrath of the White Witch.

The beautiful animation style, relatable characters and fascinating storylines make each movie unique and lovable for all ages, no matter the country or language spoken. The 2001 movie “Spirited Away” is considered one of the best movies ever, grossing about $383.4 million in the worldwide box office at the time of its release. While other Studio Ghibli films may not have done so well in the box office worldwide, mostly because many were not in theaters globally, there are still plenty of families watching from home around the world.

A majority of these international families would probably consider Studio Ghibli films to be Japanese anime, but then, if asked if they like anime, the families would probably say they dislike or have never even watched an anime. This is usually because parents find most anime to be too violent or sexy, or the children are embarrassed because anime is often considered a “geeky” and “nerdy” genre of entertainment. So what makes Studio Ghibli films more appealing and more acceptable than an actual anime?

If someone went up to a person who loves anime and told them that Studio Ghibli films are a form of anime, they would probably receive a quick lecture that just because the movies are from Japan and animated does not make them anime.

Actually, because of its distinct animation style and storylines, Studio Ghibli’s animation is often considered its own form and cannot be found on sites or channels that stream anime. Even Hayao Miyazaki, one of the co-founders of the company, has expressed his dislike for modern anime and actively tries to create films that do not fall into the category of “anime.”

In fact, the name “Ghibli” is an Italian noun, which was derived from the Libyan Arabic name for a “hot Sahara wind;” the idea was the studio would “blow a new wind through the anime industry.”

There are various ways that Studio Ghibli films differ from anime, and these choices are also what make these films more appealing to some. At a stylistic level, the biggest difference is the actual drawing and rendering of the scenes. While a lot of popular animes are flashy, fast paced, and brightly colored; Studio Ghibli films often use more muted colors, are slower and tend to be flashy only when there is a thunderstorm or a magical burst. Some people prefer this because it is softer on the eyes and thus easier to watch. The character designs are different and less sexualized, especially female-identifying characters and their lack of augmented breast and hip areas.

Another big difference is the storyline. Studio Ghibli films often follow characters going through a tough time in their life, which leads them to discover more about themselves by reconciling with other characters. At a base level, this resembles a typical anime plot line, but it is the journey leading up to the end where the two differ the most.

In an anime, the main character usually has to overcome an opponent or enemy, but in Ghibli films, the character has to overcome something about themselves to help solve the issue they have, or the storyline follows the event very closely and emphasizes the character’s emotions and personal growth.

One of the final biggest differences is with themes and messages. While many animes deal with heavy themes, most popular ones are about the main character evolving and overcoming varying challenges. Meanwhile, Studio Ghibli is known for tackling heavy themes that are not very prevalent in anime.

“Princess Mononoke” deals heavily with industrialism and environmentalism; “When Marnie was There” deals with topics of self-esteem and depression; even “Kiki’s Delivery Service” portrays the struggle of growing up and losing childish imagination. The themes are not as blatant as the main character trying to protect her forest from destruction—many of the heavy themes are just subtle enough to imply these themes while remaining appropriate for younger viewers.

This, along with character design and plot, really impacts the audience. Some people might not enjoy the heartwarming family stories with a majority of strong female leads when the alternative is fast action-packed anime series starring ditzy girls with huge breasts. Contrarily, others might not enjoy the intense, fast fights compared to exploring the life and bonds of the beloved Ghibli characters.

Of course, not all animes are action-packed, fast-paced or have characters with over-exaggerated physical features. This is just the majority of the current popular animes with a good reputation in countries other than Japan. Unfortunately, many animes that do play with heavy themes are often overshadowed by the action-packed ones in foreign countries. There are many different anime shows, and just because someone has seen and disliked one does not mean they will dislike every single anime.

Studio Ghibli is very unique and appeals to many people, ranging from traditional families with children to college students and young professionals. The characters are relatable, and the plot is easy to follow and enjoy, making the films appeal to almost every audience. Although many Americans are not used to the style and themes apparent in both anime and Studio Ghibli films, viewing them with an open mind and trying a variety of options might result in the discovery of a new favorite show or film.