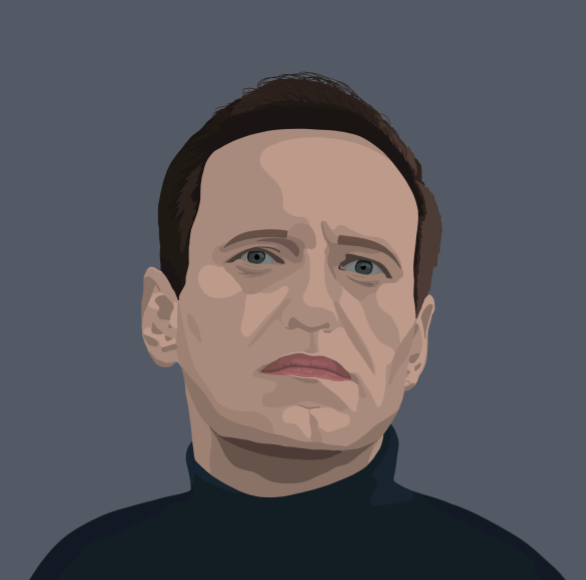 Lawyer, activist, Kremlin critic and Russian opposition leader Alexei Navalny is currently in the process of surviving a shadowy attack on his life from the Russian government. For the past 21 years, President Valdimir Putin has been tightening his grasp on the country by infringing on elections, poisoning oppositional agents and amassing a multi-billion dollar fortune. But when corruption calls, rebellion answers. For as long as Russia’s totalitarianism keeps building, Alexei Navalny has been slowly tearing it down.

Navalny began his political career in the 2011 parliamentary election, though his campaign was thwarted with rebukable governmental claims of electoral fraud. He later joined his supporters in a 6,000-person protest of this alleged fraud where he was later arrested. This detainment was called “a political mistake for the Russian government” and arguably paved the way for Navalny’s emergence as the most prominent opposition leader in Russia today.

His political career was amplified in 2013 when he took a bold step in running for mayor of Moscow, Russia’s capital city. Despite a tough loss in his campaign, Navalny raised an unprecedented $3.09 million with little access to billboards or television advertisements due to Russia’s strict control on many media outlets. With momentum behind his grassroots campaign, Navalny turned his eyes towards a forbidden political jewel: Russia’s 2018 presidential election.

After placing his bid for the race in 2016, Navalny’s political work landed him in a handful of anti-corruption rallies across Russia. But it wasn’t until 2017 that the newfound opposition leader was assaulted for the first time. An unknown assailant struck Navalny with a Zelyonka attack, a common Russian form of assault using Brilliant Green dye sprayed at the face, leaving the victim’s face dark green for an extended period of time.

While this wasn’t Navalny’s first run-in with the supervillain-esque green spray, this time his assailant mixed Brilliant Green with a caustic chemical that rendered him “mostly blind in an eye.” Claims were later made that the attack was Kremlin-motivated, with Navalny himself stating, “I have no doubt—and my confidence is based on facts—that the presidential administration organized this attack.”

So why is Navalny constantly faced with such harassment? Why is President Putin giving him the Voldemort treatment by preventing even a whisper of his name, all while Russia mitigates any political gain Navalny might achieve? New York Times reporter Andrew Higgins asked Dimitri Belousov, a former scriptwriter for Russia’s state television network, this same question in September 2020.

“They really hate Navalny,” Belousov said, because “what he has done is completely out of their control. The Kremlin fights against any force that it cannot control, any opinion that it does not control. This is their guiding strategy.”

Despite the blinding attack in 2017, this guiding strategy of the Kremlin truly gained traction in late 2018. Russia’s Central Electoral Commission later terminated Navalny’s presidential campaign, citing long-standing corruption charges that barred his previous political campaigns. While this prevented him from directly enacting political change, Navalny’s true political potential became clear to both the country and its so-called representatives.

Over two years after his failed campaign for presidency, Navalny boarded a flight from Tomsk to Moscow in August 2020 and later fell extremely ill. The agony caused Navalny to rifle off “grim howls of pain.” These howls, he said, weren’t motivated from the pain but from the encroaching feeling of death. The plane made an emergency landing and Navalny was taken to a clinical hospital in Omsk, Russia on a stretcher. Navalny later fell into a coma and was transferred to Berlin for further treatment.

In the airport before his flight, Navalny’s cup of tea held the culprit for his near-death experience. The tea reportedly held the infamous novichok nerve agent, a deadly Soviet-era chemical weapon used in multiple Russian assassinations. A joint report spearheaded by Russia’s own The Insider and British investigative platform Bellingcat implied that Russia’s Federal Security Service planted the nerve agent in order to kill Navalny.

But it wasn’t enough. After months of recovery, Navalny gathered the strength to return to Russia in January of 2021. When his flight landed, he was immediately arrested after entering customs. Navalny was taken to court, charged with embezzlement and sentenced to two and a half years in a corrective labour colony. After serving a month there, Navalny was relocated to penal colony IK-2 where his mistreatment has apparently exacerbated.

Few direct reports regarding Navalny’s conditions have been made since. His lawyer recently stated that he was suffering from major health complications, including a loss of feeling in his spine and legs. Navalny has also undergone a hunger strike in prison to boycott this mistreatment, causing him to lose “two pounds a day.”

Political suppression, assault, dubious criminal charges and an attempt on Navalny’s life have made the Russian political agenda clear. Several Western European nations have criticized Russia for their imprisonment of Navalny. But as thousands protest across the nation, people begin to pressure the government’s secrecy and call for change.

While Navalny’s story may be rooted in Russian interest, the implications and consequences of these events extend beyond Eastern Europe. His story has become overshadowed by the governmental corruption he’s tried so hard to quell, becoming a clear anecdote of a government squashing any opposition that defames their crooked politics. And while Russia is miles away from the U.S., current domestic politics have shown that governmental fraud and villainy are still all-too-familiar in the Land of the Free.