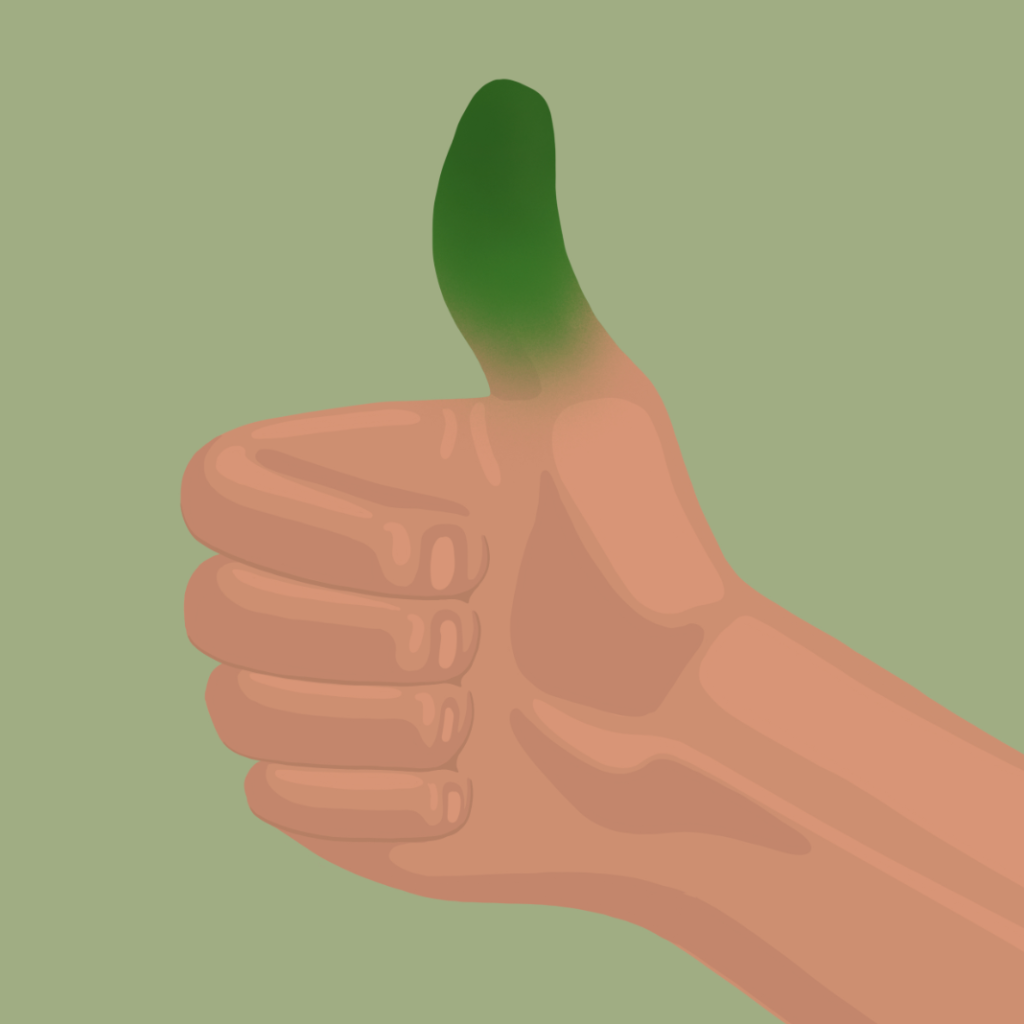 Houseplants add vibrancy to people’s homes and lives. They are living, “breathing” things that come with few consequences as to whether they survive or not. They’re the perfect roommate, and the best no-strings-attached relationship a person could ask for. But how did the trend of acquiring one’s own indoor jungle come about? How has an innocent hobby gotten darker over time? And what is the best plant to get for someone whose thumb may not be so green?

People have become plant-obsessed. It’s nearly impossible to meet someone who doesn’t have at least one in their home. The National Gardening Survey, conducted by Texas A&M University, found that nearly 37 million households in the U.S. had some type of indoor plant in 2017—only trailing behind lawn care and flower gardening in terms of popularity.

Retail sales of houseplants topped 1.6 billion dollars that same year. The 18-34 year-old demographic alone contributed a whopping 24% to that figure. Companies such as The Sill and Bloomscape have emerged to capitalize on this booming market, offering plants of all maturities delivered right to people’s front doors. These businesses have only amplified the demand from those who want to maintain a trendy aesthetic online.

Houseplants largely have social media to thank for their surge in popularity. Whole Instagram pages are devoted to the care and value of houseplants. Some notably successful examples of these lifestyle bloggers are @TheJungleUpstairs and @studioplants on Instagram. These women have transformed their urban abodes into oases indiscernible from the average greenhouse.

Your Plants and You

These aspirational lifestyles have prompted many to take interest in their own best interest. Being able to meet the needs of many different species of plants has rewarded the master gardener with improved health and well-being. Several studies conducted by Environmental Health Perspectives have shown how a leafy little friend can actually improve people’s lives just by being present.

There are several common species of houseplants that are known to filter the air of the room they’re placed in. Plants can also help to boost overall mood; just caring for them can be a therapeutic exercise. Keeping plants in the office, whether working from home or not, positively affects productivity as well as job satisfaction. Humans are meant to interact with nature, so it’s expected that a strong relationship exists between the two.

The Japanese practice of “forest bathing” is meant to reconnect humans with their roots. The term was coined in the 1980s and encourages people to get out into nature and just observe their surroundings. It serves as an escape from crowded pavement and obnoxious notifications. Along with connecting to nature comes a unique gift that is often forgotten: silence.

Having greenery in the home can offer brief moments for “forest bathing.” This is especially important during a time when spaces meant to be getaways are needed now more than ever. Not having to fret about the possibility of exposure to the coronavirus (or any other dangers, for that matter) gives even more of a reason to explore the wonders of houseplants.

Not all plants are created equal, though. While the benefits of keeping some greenery at home are valuable, the necessary maintenance isn’t as easy as it may look. Plants can be tricky to keep alive due to a variety of needs like ensuring correct pot size, using the right soil, dealing with pests, adequate sun exposure and scheduled fertilizing.

Good species for a novice plant parent come with a wide variety of attractive properties. One of the most popular (and hardest to kill) beginner plants is the Dracaena trifasciata, otherwise known as a snake plant or mother-in-law’s tongue. These robust beauties can withstand long periods with no water and little exposure to light while still filtering out airborne toxins. The trickiest part is making sure that the soil drains easily to avoid rotting.

Another fan favorite that’s more than happy to act as a set of training wheels is the pothos, sometimes affectionately known as devil’s ivy. Much like the snake plant, pothos can thrive under less-than-ideal conditions, toughing it out through poor light exposure and soil quality. A mature pothos can become truly impressive in size when taken care of properly. The beautiful vines of a pothos have no limitations in how long they’re willing to grow and can easily take up an entire wall.

Acquiring any plant as a newcomer is really exciting at first. Having it survive longer than the first month feels like a triumph on its own. And finding the perfect placement is a talent that only gets easier with time. But there comes a point where the ordinary just isn’t very satisfying. That’s where things start to get sketchy.

Plants are meant to be a fun and healthy hobby appreciated by everyone around the world. However, some highly sought-after plants may not be widely available. But for those willing to pay, nothing is stopping them from acquiring these rarities. Certain mutations, color variations and species of plants have been able to fetch thousands of dollars for online sellers.

The monstera (or Swiss cheese plant) is a staple in greenhouses across the country, known for its dramatic beauty and size. At the time of this writing, one seller on Etsy listed a monstera for nearly $16,000! So, what made this one so special? A rare mutation occurred where the green of the leaves was replaced by a white and pale pink color combination. This mutation in particular is highly sought-after and makes the plant extremely valuable.

While the plant is stunning, the price definitely causes some sticker shock. This example is just the tip of the iceberg when it comes to not-so-wholesome plant dealings. With the rise in houseplant popularity came the naivete of a budding generation of enthusiasts. Those who had much more experience thought to take advantage of a group who didn’t know any better.

Ordinarily, the average person isn’t able to shell out the money for a plant that costs as much as a used Toyota. Still, the allure of bragging rights for having something so coveted lingers for some. Luckily, there happens to be a way to get in on the action. Sellers who aren’t ready to part with their entire plant may offer cuttings for propagation at “reasonable” prices.

Cuttings are pieces of a plant’s stem or leaves that are used to grow a clone of the original plant. These pieces are most commonly placed into water until they form roots of their own. With rare plants increasing in demand, the price for just one cutting is on the rise as well. A different seller on Etsy put a price tag of nearly $200 on a Monstera cutting with the same genetic mutation as the whole plant, which was selling for eighty times the price.

The cutting being offered was described in the listing as a “wet stick.” For cuttings with a lack of roots (or any promise of roots), the potential to have a rare plant is still worth the price to some. While the plant that the cutting was taken from could have easily been sold in its entirety for much more, there’s profit to be made in every last leaf. And some just aren’t going to pass it up.

There’s a lot to be said about the popularity of houseplants. There are plenty of places to start; it’s just a matter of inspiration. And while the practices surrounding them aren’t always entirely organic, the message behind them is. They’re air-purifying, endorphin-releasing, all-natural works of art—just add water and a lot of love.

Peter Morrison is a senior majoring in interdisciplinary humanities with concentrations in hospitality business, Spanish, and professional writing. In his spare time, he enjoys learning about and tending to his plants.