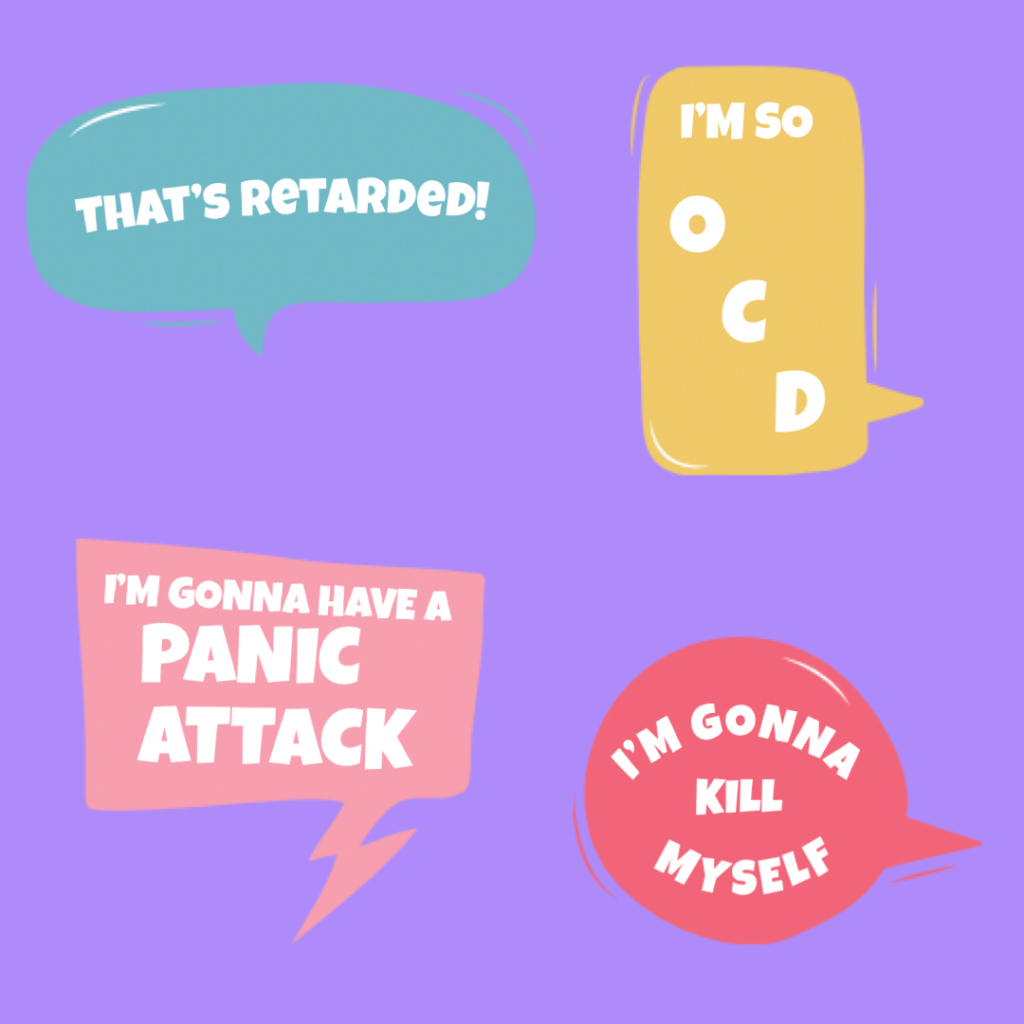 It happens. You’re having lunch with a friend and notice a stray hair on her black shirt. It’s driving you crazy. You just have to take it off. “Sorry, my OCD was going crazy!” you say, wiping it away. You laugh. But you’ve never actually been diagnosed with OCD—because you don’t have it.

Phrases like these have become commonplace in daily conversation. “I’m going to have a panic attack!” when the McDonald’s ice cream machine is broken and you have to choose something else. “I’m going to kill myself,” when you get a 90% on a test instead of a perfect score. “I’m so bipolar!” when you have a fluke mood swing.

These phrases, while usually not meant harmfully, can be offensive to those who suffer from these conditions. OCD, depression, anxiety and bipolar disorder, among others, can be debilitating and even life threatening. They are diseases—not just feeling a little organized, a little sad or a little worried.

Obsessive compulsive disorder is possibly one of the most misunderstood, and ironically, most talked-about mental illnesses. Shows and movies portray OCD sufferers as “neat freaks” who need to keep their desks and bedrooms spotless. While these can be legitimate symptoms of OCD, many sufferers experience much more severe compulsive behaviors, which can be time-consuming and debilitating.

Aside from, yes, the obsessive urge to be clean and germ-free, obsessive compulsive disorder can also look like repetitive counting, the need to repeat mundane activities until it feels “right,” repeating actions with both hands to create “symmetry” and obsessive thoughts about safety and danger. For some OCD sufferers, this can make it take hours to complete basic daily tasks such as showering, making food, cleaning and locking everything up before bed. So while liking to keep your space clean can be a sign of OCD, getting diagnosed goes much deeper and requires the expertise of a psychiatrist.

As disheartening it is to miss a friend’s birthday party this weekend because you promised your grandma you’d help her shovel her driveway instead, it probably doesn’t mean you’re depressed. Or, if you are, it is probably not because of your driveway dilemma. Depression, like other mental illnesses, is debilitating, and sadly, can claim the lives of its sufferers.

So while you might be “depressed” that Taco Bell took the crunch wrap off the menu, your neighbor, who has been clinically diagnosed, can’t even get out of bed to brush their teeth.

Depression, while affected by external factors, stems primarily from internal abnormalities in the brain. According to Harvard Medicine, depression is often seen in people with smaller hippocampuses, a region of the brain that affects learning and memory. It is not uncommon for people with depression to have thoughts of suicide, which unfortunately, is one of the most casually talked-about—and joked about—tragedies.

Although possible, it is very rare that not being able to find the right outfit for girls’ night out is giving you a “panic attack.” Panic attacks are scientifically defined by Mayo Clinic as a panicked feeling makes one feel like they’re “losing control, having a heart attack or even dying.” Panic attacks can also include sweating, trembling, nausea, chest pain, numbness or tingling and a sense of unreality or detachment. Panic attacks can take a long time to recover from, and those with anxiety may even refrain from certain places, people or situations after a panic attack out of fear of having another one.

In the same way, when someone says they are “manic” after making a spontaneous decision, such as getting a piercing or breaking up with their boyfriend suddenly, they are likely not experiencing mania; rather, it is a one-off event. Mania is characterized by sustained periods of abnormally elevated or irritable mood, intense energy, racing thoughts and other extreme and exaggerated behaviors. While suddenly deciding to get your ears pierced could be an extreme behavior, it isn’t really “manic.”

Unfortunately, the term “autism” has become a synonym for “stupid” in some circles, and even in popular media. Devin Martin, a Michigan State University student with autism, shares his disappointment with those who use the word autism in a derogatory way. “It kinda pisses me off when people use it colloquially, just because I think it’s disrespectful towards the suffering that each person who has it goes through,” he said. He also said people self-diagnosing themselves with the condition hurts more than it helps.

“I hate the idea that like, oh, you have to make me feel comfortable about being autistic by telling me that you’re awkward sometimes, or that you can’t pick up social cues sometimes. It’s denser than that. It’s kind of horrifying and traumatic not being able to completely read people’s emotions. There’s situations where you can think somebody cares about you or that somebody’s your friend, and it’s the complete opposite. You completely doubt your perception of what’s real after that.”

Martin also noticed how certain artists such as J. Cole will use the word “autism” in their music in a way that is offensive to those who actually have the condition. In Drake’s song “Jodeci Freestyle,” which features J. Cole, Cole says, “I’m artistic, you n***** is autistic, retarded.” After receiving complaints, the line was later removed. However, the line captured the way the words “autism” and “retarded” are used inappropriately in society today. “If you have [ADHD] and have a perception of what ADHD is like, I don’t think it should be considered offensive to describe something that you see to be reflective of someone having ADHD.”

“I don’t think it’s that people are too sensitive now; it’s that people have been so insensitive for so long, that there’s an expectation of microaggressions,” he said. “And until we get to a point where we’re progressive enough that we don’t continually say offensive things that perpetuate negative stereotypes or degrade the experiences of somebody with a mental illness, that’s how it’s gonna be for a while.”