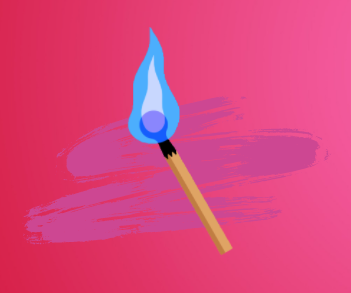 The one color rule many retain from childhood is the old tale pink is for girls, and blue is for boys. Everyone knows without needing to look too closely at products that the bright pink display inside the store is aimed toward female consumers. The color pink evokes strong connotations to womanhood that other colors do not, making it one of the most controversial pigments of all time. Not to mention this simplified color binary doesn’t leave room for non-binary, trans and gender nonconforming folks.

Because of this color coding, a lot of young girls develop a love/hate relationship with pink. As they reach middle school age, or even before then, they can feel the desire to reject the expectation of femininity and therefore the color pink. And those born boys who care for the shade may feel they aren’t allowed to engage with it.

Growing up, pink was the mark of a typical girly girl, someone who likes to wear makeup, frilly dresses and sparkly bows. These were viewed as negative traits, disapproved of by classmates and peers, because kids at that age have already been taught to value masculinity over femininity.

The act of putting girly girls in a proverbial corner is pervasive in the media. The number of books, films and TV shows in which girly girls are portrayed as the antagonists are not limited. Sharpay Evans from “High School Musical,” Jackie Burkhart in “That ‘70s Show” and The Plastics from “Mean Girls” are just a few examples of girly girls who are illustrated as shallow, dim-witted, conniving and materialistic.

And granted, that’s how those characters “are” for the most part. But is this because young women are truly like that or because of the warped perspectives of the (mostly) cis-het men who write them that way?

Pink can also represent romance, compassion and tenderness, which are characteristics considered to be of a more feminine nature. Throughout American history, all things traditionally associated with women are regarded as inferior. As a result, pink is too.

There are some perfectly valid reasons to stay away from pink things. For instance, there’s the pink tax on feminine products like tampons, pads and razors and how corporations use the pink ribbon symbol to increase profits and sexualize breast cancer awareness. However, despite these validities, the main consensus for people avoiding pink still seems to be that it is just too “girly.”

While everyone has their own personal preference for the colors they enjoy most, there is nothing that indicates colors are inherently masculine or feminine beyond the narratives society shapes around them. Colors, like a great many other things, take on whatever meaning society attaches to it.

Pink has become so associated with femininity that it seems difficult to envision a time in which the majority of men openly embraced the rosy-colored hue. Such a time actually did exist. Before WWII, pink had more masculine connotations. The color was considered to represent strength and assertiveness. It was linked to red, a war-like shade deemed powerful and passionate, while blue was thought of as dainty and prettier for girls.

It was not until the 1940s that pink became the “official color” for women and girls. Women were forced back into the domestic sphere after the men returned home from World War II, taking over the workforce again. It was then that femininity got swallowed up by pinkness, and so did products—from disposable diapers and baby toys to shampoos and toothpaste.

During a time when men felt threatened by women’s rising status in society and their changing attitudes toward the traditional lifestyle, a color distinction seemed to be a method of trying to keep women oppressed and in their place.

In today’s world, pink is now being reclaimed as it transforms from an innocent and feminine hue into a positive color of empowerment and progression. The pink that has been popularized in recent years is softer, containing shades of peach and salmon and dubbed “millennial pink.”

This muted pink is more androgynous than pinks of the past, such as the blinding neon pink of the 1980s. With more men incorporating pinks into their wardrobe, and celebrities like Harry Styles rocking pink outfits, the lines of color being associated with specific genders are blurring further and further.

Millennial pink symbolizes a shift in fashion and society. It redefines pink as a color of strength rather than weakness. As millennials and Gen Z reach adulthood in an increasingly deteriorating world, throwing out gender stereotypes is giving them a brighter outlook on life.

Since the color has been embraced once again, this works to deconstruct the problematic notions of pink and prettiness, which include that people who prefer to dress in pink are unintelligent, simple-minded bimbos. Just as Gen Z is doing away with traditional gender roles, the binary thinking surrounding colors is likely to follow.

Emily Chan is a senior majoring in English with a minor in Chinese at Michigan State University. She plans on pursuing TEFL certification to teach English to students in other countries. In her free time, she can be found reading, hanging out at the beach or working on her Chinese.