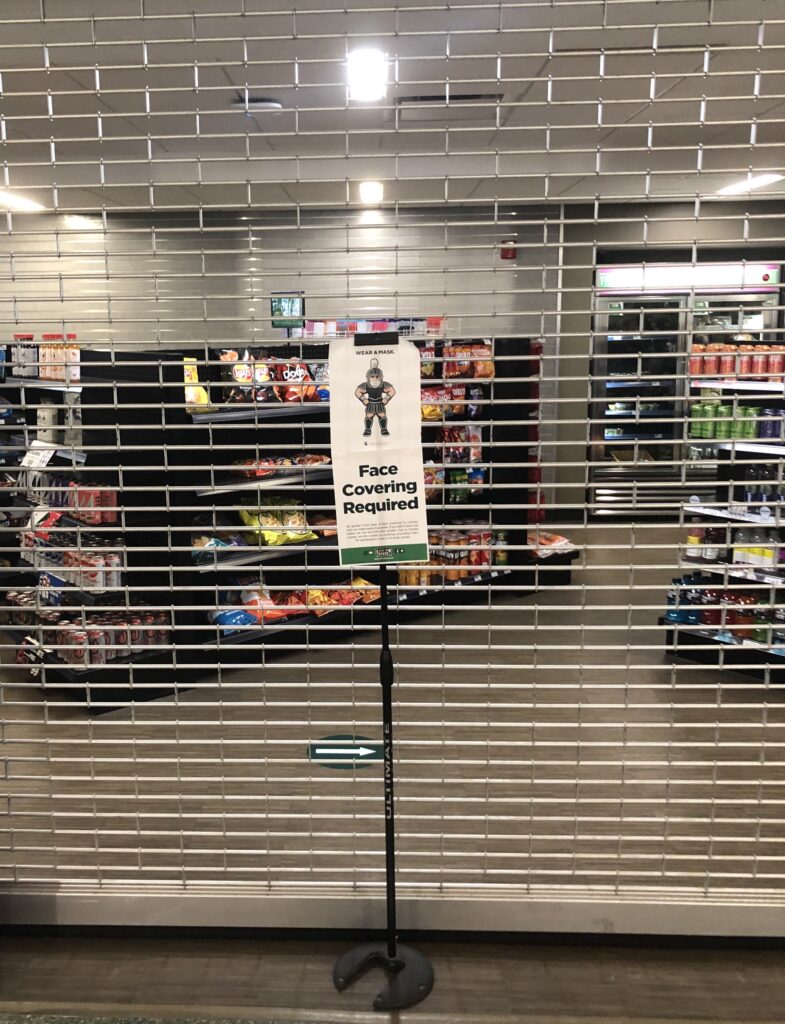 March 2020 marked the beginning of the coronavirus pandemic’s effect on Michigan State University. Over a year later, COVID’s collateral has far out scaled what anyone thought would be possible. With over half a million pandemic victims and nearly 40 million out of work, the country is reeling from this devastating moment in history. And the impacts are being felt right here on campus.

The calamitous consequences of unemployment came as quickly as the virus’s proliferation. This was evident in East Lansing as MSU employees began getting laid off in early May, starting at only 91 positions. But as the virus grew monstrously, so did its consequences. University employees got hit as 526 MSU workers were furloughed as of June, with three-fourths of these positions being in MSU’s Residential and Hospitality Services department.

The damage only continued. The State News continued to keep up with the collateral, reporting in late September that MSU’s Residential and Hospitality Services had notified another 700 employees of their immediate furlough. Meanwhile, university executives suffered as little as a temporary 2 percent pay cut.

With these furloughs set to last from one to six months, university employees were left scrambling. An anonymous level III MSU employee followed this exact timeline and witnessed its consequences firsthand. “I lost my job in March, about a week after classes were disbanded,” they said. “Communication was a bit insane with higher-ups being on furlough. I’ve been unemployed since.”

While this person was only a student employee at Sparty’s, even their supervisors began to face job loss and relocation. Some overqualified staff members were able to return to lesser positions based on the university’s employee hierarchy. But for those at the bottom, the personal damage was irreparable as they could no longer afford basic living costs.

“MSU doesn’t pay unemployment insurance on students, so I was ineligible for regular unemployment, even after submitting proof of my employment and loss of employment,” this source said. “I had to wait for Pandemic Unemployment Assistance to start, and even then I couldn’t receive it when I started classes again.”

With their jobs terminated for the foreseeable future, debt-induced students had to find alternative means of earning cash. This abrupt change left workers scattered. Jobs began to shrink, the economy began to crumble, and the result left MSU employees to make ends meet by any means necessary.

“I started my own business selling paintings because I couldn’t pay my bills,” the source said. “But now that classes have started, I don’t have time to paint, so I’m just living off the remnants of my PUA that ended in December and taking handouts from my family.”

As students began losing their jobs in droves, PUA became an essential backup plan for students concerned with tuition, rent, groceries, and more. Makayla Merony was a student supervisor of event access control staff at MSU’s Breslin Events Center until she lost her job in mid-March. Her experience was an incredibly stressful one, resulting in fluctuating employment and a lack of answers for her staff.

“I would never wish this on my worst enemy,” Merony said.

“It was really stressful; not knowing if I was going to be able to afford my groceries for the week or pay my rent stressed me out a lot,” Merony said. “Getting help from financial aid through school and through PUA was helpful, but it’s something that I know I will have to pay back in the future, so it’s frustrating.”

Since the rest of the country is facing a similar job crisis, programs like PUA pose their own set of issues. Millions of Americans have been trying for unemployment assistance since the pandemic’s dawn. With so many people requiring compensation, the government’s system of restitution is unable to meet its requirements. This issue will only continue as millions more across America could lose the PUA’s essential support, making the case of MSU employees a nationwide anecdote.

“I didn’t get a stimulus check because I have to be dependent to get health insurance from my parents, then I didn’t qualify for UIA, then lost PUA because I went back to school,” one source said. Even students with financial aid from MSU are struggling since scholarships cannot be used to put food on the table.

Little was done by MSU to support these student workers through their employment trials. The source who was a former Sparty’s employee received sparse help from their employer. Specifically, the source shared that MSU “sent out a list of jobs we could try applying for—all of them were $4-5 less than I’d been paid and would not accommodate classes.”

While this reconciliation was less than adequate, the university was able to extend some grace out to its troubled employees. The source was also able to return to work at Sparty’s “for a couple weeks at a time to clean places on campus.” A similar policy was applied to other student workers.

Merony was eventually able to return to her job as well. Her dynamic at the Breslin Center had changed dramatically as her hours became “limited and scattered.” “I was only able to bring back 10 of my 50 staff, which was hard, but those 10 had been promoted and worked hard for their positions,” Merony said. “Sadly, those workers still had to get other part-time jobs because the Breslin could not promise them a full paycheck every other week.”

Both of these student examples show firsthand accounts of the difficulties facing employees at MSU. While the university provided little monetary assistance for its employees, services like the MSU Employee Assistance Program offered consolidation for those who struggled mentally and financially. But it wasn’t enough to offset these terrible financial hardships.

MSU also offered some assistance across the board through statements such as layoff resources, panel discussions, options for a career change in higher education, and more. While these resources placate the university’s requirement to address the issue, they do little to actually uplift workers. All while President Stanley’s statements did little to address the furloughs or even explain them.

Part of Merony’s most frustrating and difficult moments during her trials at the Breslin Center were because of her employment instability. She was happy to return to work during basketball season and for COVID testing. But the “spurts” of employment and unemployment left her wondering about her plans for graduate school and not being able to afford necessities. Despite these complications, Merony has allowed these endeavors to help her “grow as a person.” She hopes that students next year will be able to work at the Breslin Center without having to worry about financial hardships.

“I definitely felt a sense of urgency because I have everyday costs, and not being able to pay them is very stressful and frustrating. But I knew that I was not the only other person going through this,” Merony said. “Some other people had it a lot worse than me, so I was also humbled by the process.”

But should students have to look for solidarity when losing a job? The stories of Merony and the other anonymous source are only a sample of what hundreds of university employees faced over the past year. Job loss, perplexion, unemployment, and short-term reemployment—their timeline and its multiple obstacles beg so many questions. What can be done? Should there be blame? Will these MSU workers recover?

With MSU holding $3 billion in endowment funds, more questions begin to arise as minimum wage MSU employees wrestle with what’s next. Now students can only hope that the future doesn’t yield the same consequences.