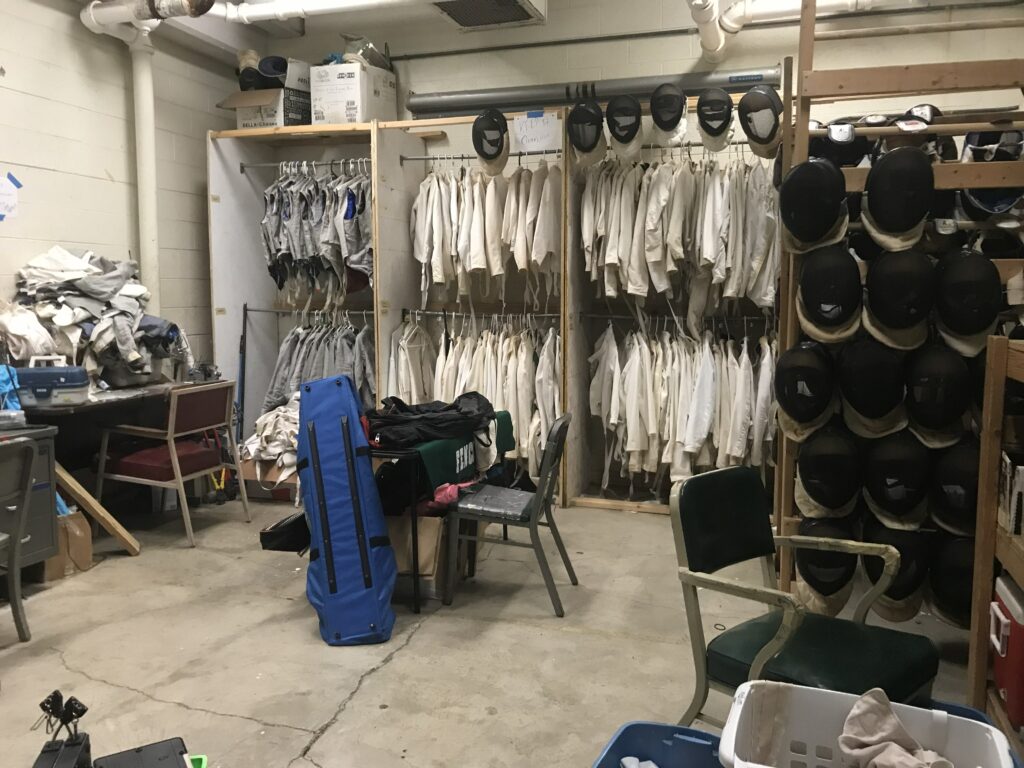 On Michigan State University campus, in the basement of the Intramural Sports West building, is a tiny room between the elevator and storage. Inside is the armory for MSU Club Fencing, and it’s laid dormant since March 2020. Everything is covered in dust, including the overflowing Lost & Found box that will probably have to be thrown away—some of its contents have been there for years at this point.

It’s not just the Lost & Found that’s overflowing; everything is, from the piles of broken gear to the heaps of still-working gear that were haphazardly thrown inside when campus shut down. Fencers who borrowed gear but were faced with the deadline to leave campus gave back what they could, hopeful there would soon be fencing again in the summer or fall of 2020. There are overflowing boxes of merchandise for events that were supposed to happen that spring that are still en route to the people who purchased them. In all this overflow, the trash can is ironically empty. But that hardly lasts as the officers of the club set to reclaiming their space.

Underneath the clutter are hidden gems: poster boards featuring photos of smiling team members, past and present. A rolled up banner declaring MSU Fencing Club as one of the U.S. Fencing’s Club of Excellence winners is discovered under some boxes. Several bags of recently donated gear are found to be in near-pristine condition. Some gear is hung back up where it belongs, some of it sorted according to size into whatever boxes can be found. Some that’s beyond rescue begins to fill up the trash can, and soon the can is overflowing with things that can be let go of.

It’s in this space that the MSU Fencing Club first begins to return to the “New Normal,” with COVID screening, masks required in all indoor spaces and no shared gear. The to-do list for the club is long: recruit heavily, set COVID safety protocol, order more gear because there’s no way there’s enough for everyone to get their own, email and message returners so that they’re ready for the first week of practices.

The e-board has their hands full with preparations, but President Emily Lin is optimistic. “This is our year to do a refresh of fencing—we have a choice over that! With all of the new people, and with us working as a team, we can do things not possible in previous years.”

Anthony Folino, the Men’s Foil Captain and vice president of the club said, “Returning to in-person fencing during the pandemic is a very important challenge that we as a club haven’t previously faced. I am very hopeful that my fellow fencers can rise to the difficulties of an ever changing landscape and know that our club will grow from this. We have full faith in our officers, our coach and our fencers and know that this season will be the best that we can make it! Personally, I can’t wait to meet all the new student athletes who want to take part in this amazing community.”

An amazing community, and the sport for everyone, as reported by The Current in April. Fencing is one of the oldest sports in the world and has been an Olympic Sport since the inception of the Modern Olympic Games. It’s grown from being militaristic and male-dominated to being one of the more inclusive sports in the world, catering to everyone regardless of ability or identity. It is not without its flaws, but that only serves as more room to improve and grow in the coming years.

MSU Fencing is one of the oldest sports on campus, with photographic records of women’s fencing dating back to 1926 in the MSU Archives. It was likely offered as recreation before then, but no record has yet been found. MSU attended NCAA championships from their inception in 1941 until 1983, even hosting a championship in 1955 according to the Museum Of American Fencing archives. Even though the NCAA team was dissolved in 1997, fencing remained a club sport and joined the USACFC in 2003 when the organization was formed. The club has remained a member of the USACFC conference since, hosting the annual Collegiate Fencing Championship on two occasions.

Despite the challenge of connecting online, the club remained active throughout the pandemic, holding nightly workouts on Zoom and monthly social events on Discord to keep the club together. Amazingly, recruitment was able to happen even in the digital sphere. But the online format didn’t allow members the amazing experience of dressing up and holding a blade, a right of passage for new recruits.

“I’m excited to actually be able to handle the blades and see which I’m going to learn. I’m also excited to be able to meet all the fun people I worked out with online in person” Caz (they/them), a new recruit from online practices said. Over the coming weeks, the new recruits will get to learn the basics of fencing footwork, and try all three blades before choosing one to regularly practice. Everyone is excited to hold a sword again, whether it’s the first or fiftieth time.

The anticipation of returning to the familiar gym and armory that MSU Fencing has met in for years is contagious. Returning members of the fencing club eagerly anticipated returning to regular activities, and they’re not alone; Sparticipation 2021 hosted over 500 RSO organizations and drew crowds of students to Cherry Lane Field. Students are excited to get back to clubs and social activities, as well as back on campus.

Because of the success of Sparticipation, the Fencing Club now faces a challenge they’ve never encountered before: recruitment is at an all-time high.

“A couple of years ago, we saw our numbers slowly dwindle. Women’s fencing teams began to shrink and fewer people were trickling into practice,” Lin said about past recruitment. “Now, we have over 166 new people subscribed to our mailing list. I am blown away by how many people we have showing interest in our club.”

MSU Fencing has struggled with recruitment in the past, competing with other clubs and evening classes for members’ time, and this year is no exception. They’re starting out the year with no Women’s Foil captain, a rarity for the club. Between injuries, busy schedules, and graduation the number of interested participants has dried up. Since new recruits during the pandemic were unable to experience the weapons firsthand, many still have yet to decide which weapon to pursue. The other two weapon groups are hanging by the skin of their teeth numbers-wise, but have enough current members that they can plan to compete. A full competitive team is four participants per gender, per weapon.

But the club made it through a year and a half of online workouts and is now facing unprecedented growth in the face of cautious COVID procedures. While COVID cases are lower in Ingham County than before, it’s still a threat the club can’t afford to take lightly.

“I’m so happy to have the chance to fence again, but there’s the looming fear that COVID cases at MSU will spike.” Secretary Emma Kolakowski said. “It would be awful for our practices to once again be put on an indefinite hold. I’m keeping my fingers crossed that the club’s precautions will keep us fencing this year. You can do conditioning and drills on your own, but fencing’s not exactly a sport that you can do without another person to fence against.”

MSU’s fencers will have to brave 70+F temperatures in the coming weeks while masked and exercising, in a basement gym that is in desperate need of ventilation. And then they’ll need to add multiple layers of polyester and cotton gear in order to fence safely. Overheating is a risk, but so is unmasking indoors, so there will be plenty of trips outside to cool off and unmask. Fencing is already an ideal COVID sport because there is no skin-to-skin contact, it demands social distancing as part of the form, but it’s not completely without risk.

It’s a lot to demand, but the e-board is working tirelessly to accommodate new recruits by fundraising for extra club gear to loan out, planning safe events for people to socialize, setting up higher standards of accountability for practices and facilitating returning members purchasing any personal gear they might need or want for the upcoming practice and competition season.

The idea of a tournament is daunting for the club since most of its returning members haven’t fenced since 2020 when the team was two weeks away from Nationals at the time of university shutdown. “I can’t even wrap my head around competing against clubs who have been able to go back to practices before we were able to, or the varsity schools in our conference,” a returning fencer said. “But at the same time, I can’t wait to throw myself back into training. This club means everything to me.”

And that’s what MSU Fencing is all about: passion for the sport and commitment to a great club environment. Love for the community is just another thing overflowing in the MSU Armory. “My favorite thing about the MSU Fencing club is that everyone is passionate about each other. We were all charmed by the club (and the sport) when we first joined, and now as leaders, we want to bring that experience to others,” Lin said, the other officers voicing their agreement.

Where there’s a will, there’s a way. And where there’s a willingness to don a second mask, there’s a team ready to refresh their outlook for the coming season. This new “normal” is only the beginning for MSU Club Fencing. Interested in getting involved? Get more information about MSU Fencing here.