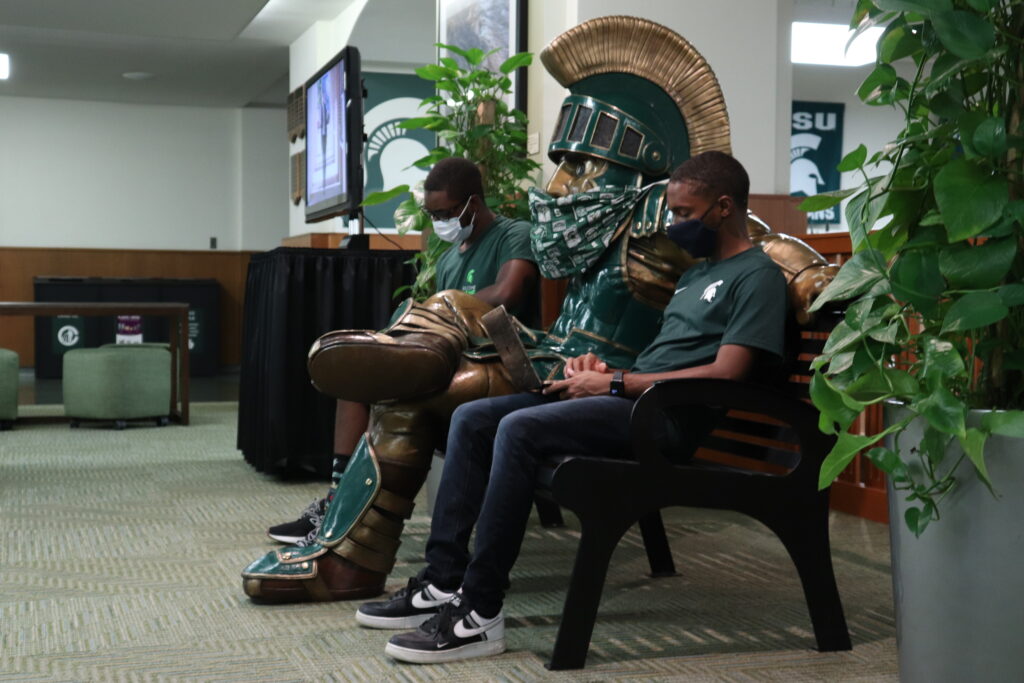 Since its arrival over a year and a half ago, COVID-19 has affected everyone and put a large hole in people’s lives, especially for students. Many have lost family members and friends to COVID-19. The world was practically shut down as everyone was forced to quarantine and social distance until we were able to combat the virus.

Over a quarter of many people’s college experience has been spent at home and behind computers. The time and effort spent minimizing the spread of the virus makes being back on campus feel a little, well, too good to be true. Even though people’s wishes have been met with the return to in-person classes and the many wonders of the college experience, students are still dealing with the social effects and disparities the pandemic has caused, as well as the risk of another outbreak and the return to virtual classes.

Evan Bell is a 19-year-old sophomore at MSU majoring in mathematics. “Being on campus is great,” said Bell. “Yeah. It’s good to finally meet people. It’s a little bit –— almost a weird feeling to have in-person classes again.”

The “weird feeling” Bell expressed about being back in person is a sentiment that many Spartans, as well as students and instructors everywhere, share. “I think now everyone is just so used to how it is … if you live in a situation long enough, you just get used to it,” said Bell.

This is the closest students have been to each other and the closest we have been to the authentic college experience since spring 2020 when the virus changed everything. Getting acclimated to being around others again is a process. There is also the looming possibility of reverting to virtual thousand-dollar classes (or rather, thousands of dollars).

Sam Barans, 18, is a sophomore studying math and physics. “Obviously, you know, with the pandemic, there’s the chance that everything gets swept online … I feel like it’s something we’re all kind of subconsciously primed to be ready for,” said Barans.

Michigan’s last recorded population in 2020 is over 10 million. As of September 10, in this state alone, the weekly average of confirmed new COVID-19 cases is 2,452. There have also been 21,807 Covid-19-related deaths in Michigan to date. The numbers seem relatively small, but it doesn’t hurt to be safe, especially with the Centers for Disease Control’s recent news of the mu and lambda variants, in addition to the delta variant, against which current COVID vaccines are proven to be less effective.

In addition to acclimating to being in person again, sophomores must learn about campus life on their own. The freshman class this year had in-depth orientations about navigating campus and using meal plans, but sophomores never had one, even for those who were living on campus last school year. Campus was also inactive during their stay.

However, many sophomores this year are excited and motivated to explore after their lackluster freshman year. “People try to meet people, like people going to all the clubs, people going to like all the events to take advantage of opportunities,” said Barans. “I think I feel like a lot of the sophomores are in that position … after having that year of being so socially deprived. People are pouncing on stuff and that’s just great.”

It’s not just underclassmen getting used to life on campus in the era of COVID, though. Juniors and seniors are feeling nostalgic, whether they’re walking along the Red Cedar or trying to keep their balance on CATA buses again.

There have been mixed reviews on how MSU is handling COVID-19. Some students are content and impressed by how things are going; some express that they think more could be done.

Darby Mason, 19, is a junior at MSU. Mason thinks the policies are well-served and are being followed appropriately. “I mean, people are wearing their masks inside and, you know, following protocol and stuff,” she said.

Rebekah Jin, 18, is a freshman majoring in international relations. She is originally from Illinois and has a lot of friends attending the University of Illinois. “I think there’s a lot more safety precautions [at U of I] when it comes to COVID,” she said. She said that they take testing more seriously and that people who test positive there are required to be quarantined, especially if the person has the delta variant.

“It does worry me,” Jin said. “I’m worried about another outbreak because I think the last thing that we would want is to go into another shutdown where we have to live in our houses for another year and a half.” She did say, however, that she is glad that there is rapid testing available at MSU and that every college campus should have it.

According to MSU’s website, vaccinated students who have been in close contact with people who tested positive for COVID “do not need to quarantine or isolate and should continue to attend in-person classes and participate in social activities.”

However, it is “incumbent on students to notify their instructors that they will not be able to attend class if they have tested positive.” People are required to stay home if they test positive for the virus. The MSU website also said, “When positive cases are identified, MSU’s COVID-19 Triage Line in collaboration with Ingham County Health Department, or applicable local health department, will lead contact tracing and notification efforts.”

Not everyone is satisfied with the way MSU is handling the virus. A tweet surfaced on September 8, containing an alleged screenshot of an email from a professor. “I found out yesterday that a student who was at our lecture last Wednesday tested positive for COVID-19 on Friday,” it said. “The University contact tracing system has failed to alert us of this.”

Students like Bell and Barans have expressed uncertainty in the reliability of the tracing system. “There are a few things that I think definitely could be improved, like contact tracing, which exists, but in my experience has not been useful at all so far,” said Bell.

Bell and Barans also noted what they feel are inconsistencies in the university’s COVID policies. “I think the restrictions and policies they have in place make sense, but there are places where it’s not applied that it doesn’t make sense,” said Bell.

Barans said that many of the classes he is interested in are only held online. “It’s like, you can’t have in person classes with masks on, but we can have 70,000 people in the stadium … all next to each other without masks on,” he said. “It’s just kind of like, oh, so I see what this is about. This is about money and the university making money … not about the students.” He said that he’s glad athletic events are taking place again, but he thinks he wouldn’t be as bothered by guidelines if MSU was consistent about enforcing them     .

Isaac Smith, 19, is a sophomore studying math and physics. Isaac agreed and added that the service centers don’t allow residents to use their ping pong paddles inside and juxtaposed it to the University’s loose attitude about football games to further point out inconsistencies

Ultimately, students are excited to return to campus, but they are justifiably worried. Students who are new to campus are getting an experience they’ve never had before. Freshmen won’t have to say that the pandemic took away from both their high school and college years. Sophomores are eager to get the experience they have been lacking but still paying for. Juniors and seniors get to almost time travel to where they were before the World Health Organization declared a state of emergency.

However, everyone still needs to be conscious of the battle with COVID-19. It is still a risk that the MSU community can minimize by practicing social distancing wherever possible and staying clean. The policies that come with shifting back to in-person classes are not without flaws and, with irresponsibility, may land MSU where it was a year and a half ago. Hopefully, that scenario is little more than a thought that grows quieter over time.

Kristian Wayne is a senior studying creative advertising and journalism. He spends his time writing, taking photographs, and working as the head of advertising at MSU Telecaster’s Giraffehouse. He currently interns at WKAR for the social media department. He is a song-writer, copywriter, actor and creator who hopes to practice freelance photography and creative media. Instagram: @chillonk_