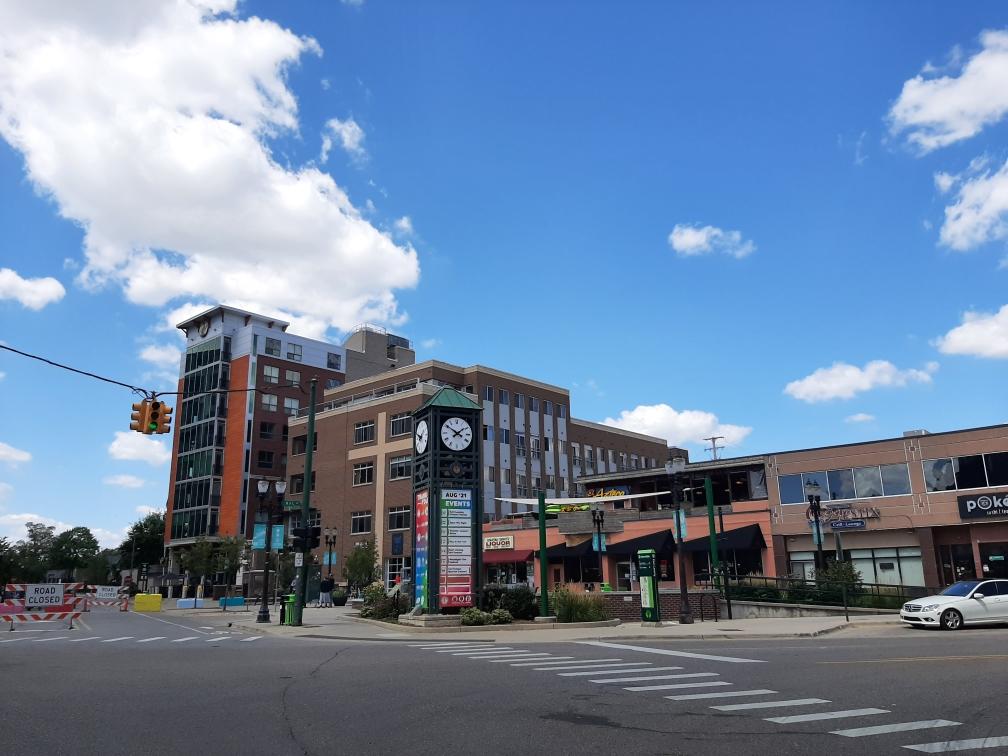 This article is part of the Fall 2021 Magazine Issue Series. Read the full issue here.

Downtown East Lansing has been no stranger to change in the last few years. Particularly the kind of changes that involve elegant luxury housing, slick new restaurants and a whole lot of construction. But for whom is this all for? Despite The Hub, Landmark and The Abbot—now one of Grand River’s most prominent features—all being marketed as student housing, Michigan State University students aren’t necessarily the ones benefiting.

Standing above Barrio and Jolly Pumpkin on Albert Avenue is Newman Lofts, a high-end condominium complex reserved for tenants over the age of 55. While senior housing might not be everybody’s first answer when asked what should be built next to bona-fide college bars like The Riv and Lou and Harry’s, that has been the City of East Lansing’s hope for many years: to bring diversity into an area dominated by MSU students.

“The continuing policy of East Lansing is to push the students out of the downtown area,” said Matthew Mitroka in a 2016 article for the Lansing State Journal. While the city insists this is not the case, Mitroka worked on the city’s Planning Commission back in 2006 when a $750 million redevelopment project for the area containing Cedar Village and The Hub was in the works. Though this project eventually fell through due to a myriad of issues (including the 2008 recession), its lasting effect was a zoning restriction that required 50% of housing built in the area be owned, not rented (the usual housing choice of college students).

This zoning requirement—now down to 25% and amended to include senior and fixed-income housing—has been the crux of East Lansing’s redevelopment saga. Since 2006, the city has seen several major redevelopment projects fail, in part due to the difficulty this requirement imposes. A museum, a movie theater and a riverside park are just a few of the attractions proposed but never materialized.

Despite the zoning requirement being lowered, filling the vacancies in new housing continues to be an area of concern. There is, however, an alternate route to diversifying downtown: the 25% housing requirement can be met through fixed-income housing. Not only would this mend the affordability of living downtown, but it could bring a younger crowd into the area. Minneapolis-based nonprofit Artspace is hoping the city will let them do that and more.

ELi covered a January 28 meeting between Artspace and the Downtown Development Authority  that saw the company pitch their vision “to create, foster and preserve long term affordable space for artists and arts organizations” in East Lansing. Artspace boasts 54 active projects like this across the country, including one in Dearborn, MI. The central feature of these spaces is live-work studios for artists of all kinds.

Another proposal the city is considering comes from Core Spaces, the developers that brought The Hub to East Lansing. Listed on the city’s website under “projects” is The Hub 2, a pair of 14-story buildings that would house three times as many people as the first rendition. If built, they would go directly behind The Hub on Bogue Street, replacing all existing buildings except for the Farmhouse Fraternity, whose landlord was uninterested in selling their property, per ELi.

Local landlords are quite concerned about the possibility of The Hub 2, as it could have significant ramifications on the East Lansing rental market. This could be beneficial for students by lowering rent prices through increased choices. On the other hand, the first Hub provided plenty of cause for concern upon opening. In addition to a botched move-in day and foul play in their Google reviews, The State News profiled a Hub tenant whose apartment literally deteriorated within days of moving in. A chunk of the ceiling fell in and caused a flood which forced the tenant to move out of the unit with no compensation.

MSU’s decision to require students to live on campus for their first two years, beginning in the fall of 2022, only thickens the fog surrounding the future of renting in East Lansing. To get to the bottom of what lies ahead, “The Current” talked with Adam Cummins and Annette Irwin, the city’s Community and Economic Development Administrator and Housing and University Relations Administrator, respectively.

Their conversation, lightly edited for clarity, follows below.

The year is 2040. Who is living in downtown East Lansing?

Annette: Who isn’t living in downtown East Lansing in 2040, man?

Adam: Well, you know, we’re really striving to diversify downtown and not just the economy, but the residents, you know, we have Newman Lofts here, 55 and over. And so, we hope it’s very diverse, it’s a good mix of students and people of all ages, all walks of life.

Annette: So I think that even now, the perception is that nobody lives downtown except for students. But, there’s a lot of non-students that live directly downtown in some of the condominiums that are out of students’ price range. So, I think we’re slowly working our way towards that diversity. I think it’s easy to forget it isn’t just a college town, because the students are clearly a dominant demographic.

What advantages does a downtown with diverse housing have over a one full of MSU students?

Annette: You don’t want to have a community that only appeals to one demographic. It doesn’t make for a very exciting place to live. People like to be around others that aren’t always exactly like them. And then, it gives the area something to offer. You want a downtown with options.

How does the strong student presence downtown affect East Lansing’s ability to attract other demographics?

Adam: In my opinion, it’s a pro and a con. There is the perception that it is just students down here, and so some people may avoid it for that reason because they don’t wanna be in a student-dominant area, but it’s also a pro because students bring a lot of activity, a lot of life and lot of new ideas into the area. I think it’s also a huge asset.

What kind of problems are you anticipating with integrating different crowds into East Lansing?

Adam: The typical ones. When you have a younger age group who may like to stay up a little later and be a little louder, and you have an older group that, you know, may go to bed earlier and not enjoy the bass coming through the windows, there’s always gonna be ongoing challenges. We are determined to learn how to get through those hurdles as a community because a lot of this is new and we’re learning as we go.

Annette: There’s always gonna be some worries when you have people who aren’t used to downtown living coming into apartments in the heart of the city. The noise level is much different right downtown versus a few blocks away versus a few miles away. We hope when people move into the area they find the right spot for them. Everybody gets irritated with their neighbors once in a while, but that we can handle.

How will the Hub, Landmark, and The Abbot affect rental costs for students living elsewhere?

Annette: Isn’t that the million-dollar question? You know, I don’t know. It’s been hard to say and everybody talks about that. I think it’s just gonna depend a little bit. So for students that are living in the houses in the neighborhoods, I think the houses are still gonna be in the same kind of level of demand. This is only my opinion now, but it’s my opinion of watching housing in East Lansing for 25 years. I think the houses are gonna remain kind of the same because it’s a finite market with a pretty high demand. Now the only place that we may see a softening eventually in the market, I would anticipate, would be in some of the older apartments farther away from campus. Because you know, maybe there’ll be enough supply that it will start to soften a bit. I don’t think we’re gonna see anything earth-shattering. I just don’t. But I think those will be the soft edges of our market.

What would you tell somebody who’s worried about the affordability of off-campus living and the rising costs?

Annette: I would tell them to shop. And I say this out of experience. You know, not only work at the City but I happen to be a parent of now-alumni and I let them kind of do their own thing, but I did remind them that there is no rush to find a place to live. There’s plenty of places to rent in East Lansing for students, and you can negotiate. And in fact, tell people no, you’re not gonna live there because it is not in your budget. And I think if more of that happened, students would find they could negotiate a little bit. My kids had landlords calling them in the spring going, hey you still interested in my house?

There were a couple hiccups with The Hub opening and the quality of those apartments. Considering there’s a proposal for a second Hub building, what can the city do to prevent those mistakes from happening again?

Annette: The problem was timing. They were backed up and they were in a rush, and I think that’s what caused two kinds of problems. One was some things that clearly had to be redone and then the other marketing. Students had very high expectations of what they were going to be walking into based on their really splashy marketing plan that was disingenuous, to be honest. We had residents asking if a good Google revier would earn them a gift card. Some business practices are not under our control, but I think we would do more in writing beforehand and they would have to meet certain deadlines with us as a city when we’re doing inspections to be able to open by a particular date.

On the note of the Hub 2, what are your guys’ thoughts on the potential for that? Are you in favor of building another one?

Adam: I don’t have historical context with the Hub, but I would like to not see so much going up. I think we have enough student housing. And I’ll just leave it at that.

How would Artspace change East Lansing, and particularly what would it change about East Lansing to college students?

Adam: In my opinion, it’s gonna fill a gap on some affordable housing that we need downtown, especially for the creative sector. I just feel like it will provide more opportunities for the creative sector to actually conduct business here and stay here. You know, more entrepreneurial opportunities and to that point, more diversity over time. With all the diversity in housing, retail and restaurants that we’re trying to achieve here, we hope that there will be more opportunities for the student population to stay in town, and live, work and play in East Lansing long after they graduate from MSU.

As time moves forward, so too does progress. This is an aphorism that is only beginning to prove itself in East Lansing. But with these significant strides towards the city’s vision comes equally significant uncertainty. Will East Lansing look like East Lansing in 20 years? Can the desired demographics be successfully integrated into the community? Will students survive the overhaul along Grand River? Perhaps there is just one certainty surrounding the future of downtown East Lansing: change.