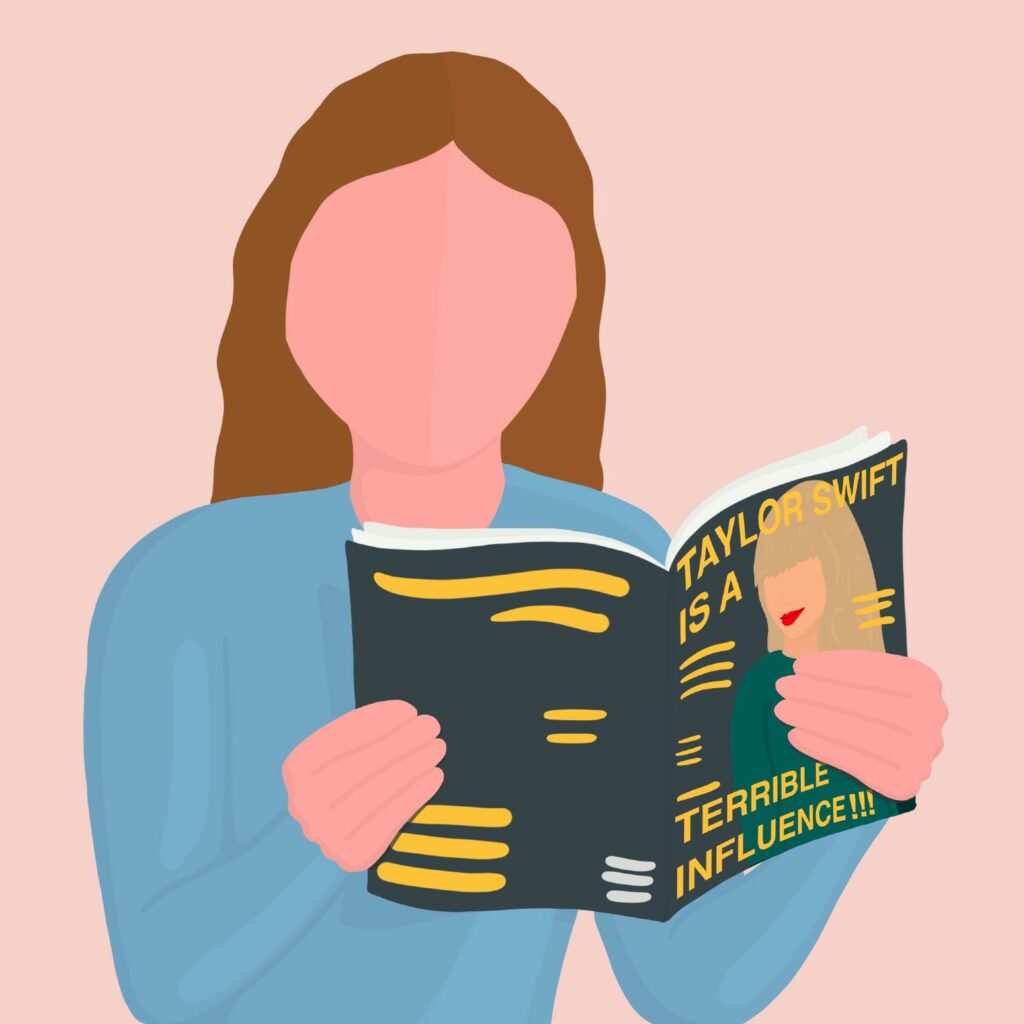 For the last 15 years, Taylor Swift has been one of the most successful artists in the music industry, winning a total of eleven grammys including Album of The Year three times — the first woman to do so. She holds the record for most American Music Awards won by an individual artist, and in 2019, she was named Billboard’s Woman of the Decade. It’s safe to say Taylor Swift is loved by many — but not everyone.

Though her accomplishments make clear she is a talented musician, Taylor Swift has been the center of many critiques and controversies regarding her music and what she writes about. At the start of her career, Swift rose quickly to stardom with her first album, “Taylor Swift,” debuting at Number 19 on the Billboard 200 and holding a position on the chart for 277 weeks. Millions of young kids, especially girls, looked up in awe at the sweet 16-year-old girl singing about the teardrops on her guitar for the boy named Drew who smiled at her in school.

But, as Swift got older, so did her music. The lyrics changed from sharing the joy of first love to highlighting the pain of heartbreak. And as her music changed, so did the public’s perception of her. She went from “America’s Sweetheart” to having people across the world shaming her for talking poorly about the men she dated and accusing her of being a bad influence on young girls because of it.

In an article for the Liberty Champion in 2019, Hattie Trouttman wrote, “Instead of showing girls how to respect men and set an example of how to have a healthy relationship, Swift only sends the message that unstable, sporadic relationships are okay because you can make money off of the break-up.”

In another article from College Times, Orla O’Callaghan wrote, “I would imagine that Jake [Gyllenhaal], John [Mayer], Taylor [Lautner], Harry [Styles], Patrick [Schwarzeneggar] and whoever else she’s dated, were all more than a little teed off when they realized their ex was making money off them. But not content with avenging her exes, aul [ole] Swifty hurts the male image in general too.”

These comments were just a few of the many that have graced the pages of magazines or served as talking points on late night TV throughout Swift’s career. And over time, many, including Swift herself, have questioned the intent of the comments.

“Have you ever heard someone say about a male artist, ‘I really like his songs, but I don’t know what it is — there’s just something about him I don’t like?” Swift said when accepting the award for Billboard Woman of the Decade. “No — that criticism is reserved for us [women.]”

For years, young girls were taught by the media and often those closest to them that Taylor Swift was a bad influence because she dated too many boys and wrote songs about it and profited off of their heartbreak. People seemed to care more about protecting the reputations of the men who hurt her and less about the girl who cried all the way home.

“I remember the ‘stigma’ that came along with being a Taylor Swift fan,” Michigan State University alum Alaynna Dressler said. “People were so quick to judge — ‘all she writes are breakup songs,’ ‘she has a new boyfriend every week,’ etc. I never really understood why that was a bad thing.”

In an article for Atwood Magazine, Lexi Lane discusses the double standard Swift and many other women in the music industry face.

“If you analyzed charting male songs about relationships to the backlash they received about writing them, it would be near to non-existent,” Lane said. “However, if Swift, a woman in her 20s at the time of songs like ‘Dear John’ and ‘Back To December,’ dates a typical amount of men and writes songs, it becomes punchlines for award shows on national television.”

Swift has often spoken out against these double standards and continues to stand up for women in the industry. So, why do young girls still see her as a bad influence?

One answer is internalized misogyny. Though it may seem obvious to some, many don’t understand the complexities of internalized misogyny and how it can affect who someone is and what they like. While sexism describes the prejudice and discirmination placed against others (generally women) for their sex, internalized misogyny is less easy to describe but rather highlights the projection of sexist ideologies onto oneself.

“Femininity inevitably turns into internalized misogyny when the nature of the female sex is judged based on the stereotypes and unrealistic ideals that are placed onto women,” Katherine Manatos said in an article for The Inkblot Magazine. “These standards of what ‘femininity’ looks like are implanted into the daily lives of girls from the moment they are born.”

Both men and women face internalized misogyny as a direct result of the sexist and misogynistic structures and beliefs in society that were passed down to them. And, because it was so ingrained in people at such a young age, it can mask itself in many forms that often go undetected. For young girls, it often shows itself through the degradation of themselves or other women simply because they might have done something they were taught was “un-lady-like” or “too feminine.”

“As a naïve and insecure middle schooler, I thought it was ‘cool’ to hate Taylor Swift because everyone else did,” Dressler said. “I let myself be peer pressured into hating her because I thought that if I admitted to liking her music, people would be less likely to like me. In doing so, I began spouting those sexist arguments that I had heard others say like ‘too many boyfriends’ or ‘too many breakup songs.’ I am ashamed of all that now.”

Many young girls may find themselves disliking Taylor Swift or her music because when looking at a society dominated by the rejection of femininity, Taylor Swift is unapologetically herself: a woman.

“Young women do not want to be seen supporting Swift because she is depicted as being girly and ridiculed for writing about her boyfriends too often,” Taylor Herzlich said in an article from The Fordham Ram. “Young girls idolize being different or ‘not like other girls’ because they recognize the disadvantageous treatment of women in society. Many young girls dislike Swift because of an innate fear of being seen as too feminine, and femininity is often punished by society.”

Recognizing internalized misogyny can be difficult, but it allows people, especially women, to overcome societal structures that have made them think the way they do. When looking back at Taylor Swift’s career, it’s hard to find justification for the public’s disdain of her actions that don’t lead back to the sexist and misogynistic structures that plague the music industry. Especially when she has been an outspoken feminist and leader in the fight against these double standards.

“In the last 10 years, I have watched as women in this industry are criticised and measured up to each other and picked at for their bodies, their romantic lives, their fashion,” Swift said when accepting the award for Billboard Woman of the Decade. “We are held to a higher, sometimes impossible-feeling standard. And it seems that my fellow female artists have taken this challenge, and they have accepted it. It seems like the pressure that could’ve crushed us made us into diamonds instead.”

She has stood at the frontline of many political movements from supporting LGBTQ+ rights to promoting politicians and legislation. In June 2019, Swift got over 800,000 people to sign a petition to Senator Lemar Alexander in support of the Equality Act after encouraging people to do so in an Instagram post. In October 2018, Swift encouraged her fans on Instagram to register to vote for the upcoming presidential election. Vote.org then reported 65,000 people had registered to vote within 24 hours of Swift’s post.

And, in 2013, she countertested a lawsuit with DJ David Mueller, who had sexually assaulted her and sued her for defamation. In an effort to make a statement about the justice system in America and how sexual assault and misconduct has been mishandled for so many years, she sued him for a symbolic dollar, and won.

“I’m not really interested in your money,” Justice Elena Kagan said to the New York Times when describing Taylor Swift’s argument in the courtroom. “I just want a dollar, and that dollar is going to represent something both to me and to the world of women who have experienced what I’ve experienced.”

Say what you want about her music, but it is hard to dispute the work  Swift has done for human rights and especially women’s rights. She has proven herself to be a great influence on not only young girls, but people of all ages. She stands for what she believes in and protects the rights of those who need it most.

It may be hard to separate Swift from her music. And if you dislike her music, that’s completely okay. But if you hate her because of who you think she is or what she stands for/against, ask yourself: is it because of what she’s doing, or is it because she is a woman doing it?