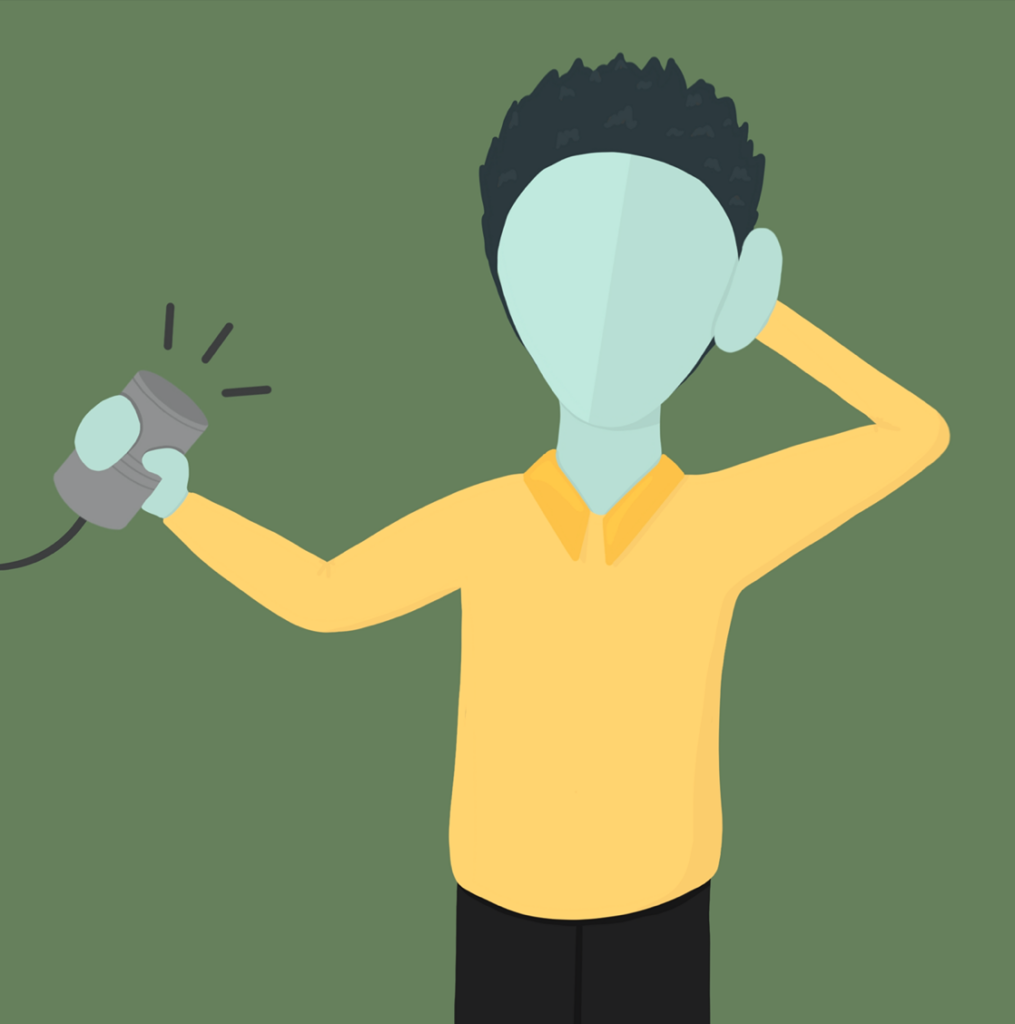 As children, we’re told to listen to our teachers and our elders, but as we age out of school, many can make the dangerous mistake of thinking they’re done learning. It can be difficult as an adult to identify our teachers, but the truth is that our new teachers are all around us.

With the rise of a global pandemic, we’ve been told to listen to the experts. The matter of determining who, exactly, is an expert and who is spreading dangerous misinformation gets murkier by the day. Experts are, by definition, people with authoritative knowledge in their field. They’ve put in the time and the schooling to deserve a certain amount of credit for knowing what they’re talking about. It’s easy for humans to slip into preconceived notions and gut reactions. We want things to “make sense,” but in reality, not everything can be understood. Our own biases can greatly affect how we listen and learn from others, so the first step to truly listening and understanding is to acknowledge our biases where we can.

It’s important to know that experts aren’t omniscient and shouldn’t be given more esteem or credibility than they’ve earned. They may be experts in certain fields, but not necessarily in everything they discuss. Put simply: tread the internet wisely.

This is learning in its simplest form: listening to people who we know know more, and have the paperwork to back it up. But not every expert has a college degree; many are experts through personal experience and learning isn’t always about new information. Sometimes, it can mean unlearning what we thought we already knew.

Evelyn Koh, a Harvard Grad and Gender Scholar, also known as TikTok user @herspective, practices and teaches a concept called “radical listening.” She explains this concept as, “if someone with an identity that is different from ours speaks about what is hurtful, what is damaging and what is offensive, we listen, learn, change and use our social power to advocate for that person. When a disabled person says something is ableism, it is ableism. If they say something is hurtful, it is hurtful. That’s not up for debate.” She explains that when someone speaks on something that she herself does not experience, she defers to them on what is damaging and what is not.

While there are many examples of people (especially young adults) practicing this concept and learning to the best of their abilities, there are still those who defend their hurtful language and practices. This is because of their refusal to acknowledge the root of their ignorance: privilege.

A prominent example of this is the movie “Music,” written and directed by Sia with Maddie Zeigler as the lead. The main issue here is that Zeigler, who is not autistic, is playing a non-verbal autistic teenager. Sia’s intention was to “lovingly represent the community,” but that is impossible without the base requirement of hiring autistic actors for autistic roles.

If a movie is made to help cast a less harmful light on autistic people and to bring awareness, autistic people must be a central part of its making. This was not the case. Sia argues that she researched neurodivergence for years, but it soon came out that her “research” was only through talking to the parents of neurodivergent children. While parents have a unique experience of care for their kids, only those actually in marginalized communities can accurately determine what is and is not their personal experience.

Even prior to its release, the movie caused massive discourse on Twitter with people pointing out Sia’s insensitivities. Sia harshly defended herself and her movie, tweeting “Grrrrrrrrrr. Fuckity fuck why don’t you watch my film before you judge it? FURY.”

Autistic actor @HelenAngel called Sia out on Twitter, tweeting “Several autistic actors, myself included, responded to these tweets. We all said we could have acted in it on short notice. These excuses are just that—excuses. The fact of the matter is zero effort was made to include anyone who is actually autistic.”

Not only was she rude to fans and misrepresented communities of which she is not a part, but fans also brought attention to the use of restraint on the autistic lead, a practice that is extremely damaging and has not been suggested by experts for a long time. It was stated that if Sia truly did her research, she would have known not to perform this technique or to suggest it in her film.

Sia, who claimed to be a friend of the autistic community, refused to acknowledge her own ableism and the destructive nature of her movie, further digging her heels into her ignorance rather than listening to those who she hurt and trying to do better. Sia’s responses may have permanently cast her in a dimmer light, and it certainly lost her many long-term fans. With Sia’s high-profile platform, many fans were disappointed she didn’t use her status to amplify the voices of austistic people instead of her own.

This is a perfect scenario of not listening to your teachers, however untraditional they may be. Her fans cared enough to use their time to educate her, but she refused to admit her mistakes and instead made a performative apology only addressing the issues. Sia tweeted a blanket apology and said the movie would be aired with a warning, saying that “Music” does not condone or recommend the use of physical restraint on autistic people, as is shown in the film. After that, she simply tweeted “I’m sorry.” While this warning was a necessary addition to the film, it far from addressed the extent of her missteps in the making of this movie.

This particular crossover of hate and ignorance isn’t reserved for Sia, though. In the same way it is vital not to perpetuate stereotypes and to listen to the people in marginalized groups when they are telling you their experience and truths. It is also important not to spread hate-charged lies to the media as if they are true. Representative Marjorie Taylor Greene of Georgia made a Facebook post suggesting, in all seriousness, that the 2018 California wildfires actually had nothing to do with climate change, but instead Jewish “space lasers.”

This is such a ridiculous claim that you’d think it would be easily dismissed as sheer antisemitism, but it has not been. Avery Tyson, a junior at Michigan State University, knows all too well how little people are willing to listen and learn from her about her Jewish culture.

“People all the time have tried to explain the Holocaust to me, acting like I don’t understand it. I’ve also met Holocaust deniers,” said Tyson. “I’ll tell them they’re wrong, and they’ll say the Holocaust didn’t happen and mean it. I’ve also tried to explain to someone why Jews aren’t going to hell and they told me to shut up and that I was wrong, and then they told me I was going to hell. I was in third grade, that was fun.”

Tyson has all too many personal experiences with antisemitism. She devotes countless hours of her life diving into Judaism as an ethnicity and religion. She dedicates time to learning about the history of the Holocaust and her own personal heritage. She knows that she has every right to educate others on this subject especially when they are being rude, but often gets frustrated when people do not accept her as someone who is knowledgeable on the subject.

“I’ve had people tell me that I talk too much about my Judaism, and that I’m too intense about it and that I should just chill out about Jewish rights,” said Tyson. But she isn’t planning on doing so any time soon.

It can be difficult to recognize our peers as our teachers. It takes practice, but we all must take a step back and try to realize that the only step forward is through open ears. Tyson understands the concept of radical listening from the opposite side as well. She has also been caught in situations where she’s talking to someone who knows more than she does on a subject, particularly the LGBTQ+ community.

“I know an okay amount about it, but often I go into conversations thinking I know more than I actually do. I always try to be aware of that and learn from those situations,” said Tyson. Sometimes it can be easy to get lost within our own marginalized identity and recognize that we can be queer, disabled or Jewish and still have much to learn in the way of empathy for those who are different from us. No one can understand everyone’s experience and there is always something to be learned.

Making mistakes and saying tactless, sometimes ignorant things is an inherent part of life. It’s what one does with those mistakes and how they conduct themselves the next time that matters most. Mistakes are opportunities to learn.

Not everyone is born with natural listening skills. Listening, really listening, is largely rooted in empathy, so for those who struggle with empathy, try this: focus on the needs of others in conversations. Ask, what do they need from this conversation right now? Why are they saying this specific thing? And when the answer is apparent, ask them if it is correct. It isn’t healthy to assume, and people will appreciate the genuine interest. Just be prepared for people to answer in a myriad of ways.

“Be quiet. Listen if you don’t understand something. Ask people to elaborate. If you still don’t understand, Google,” said Tyson. “You should take time out of your own life to educate yourself, and if you can’t do that then you need to shut up and listen when someone is trying to educate you.”

As a community, we need to start normalizing listening and changing our opinions after hearing more information. If we cannot do this, then we’ll all be stuck in our ways forever, with no growth or space for new ideas. In order to grow as a community, we cannot let judgement cloud our conversations. We must listen, learn and look for our teachers in all their forms.

Laura Westcott has a BA in professional writing with a concentration in publishing and editing from Michigan State University. She is an editor, artist, storyteller and published comic book illustrator. In her free time you can find her knitting, bingeing “Schitt’s Creek” over and over again or so enthralled in a book that she hasn’t looked up past the pages in hours. If you’d like to follow her art journey, you can find her @laurasartspace on Instagram.