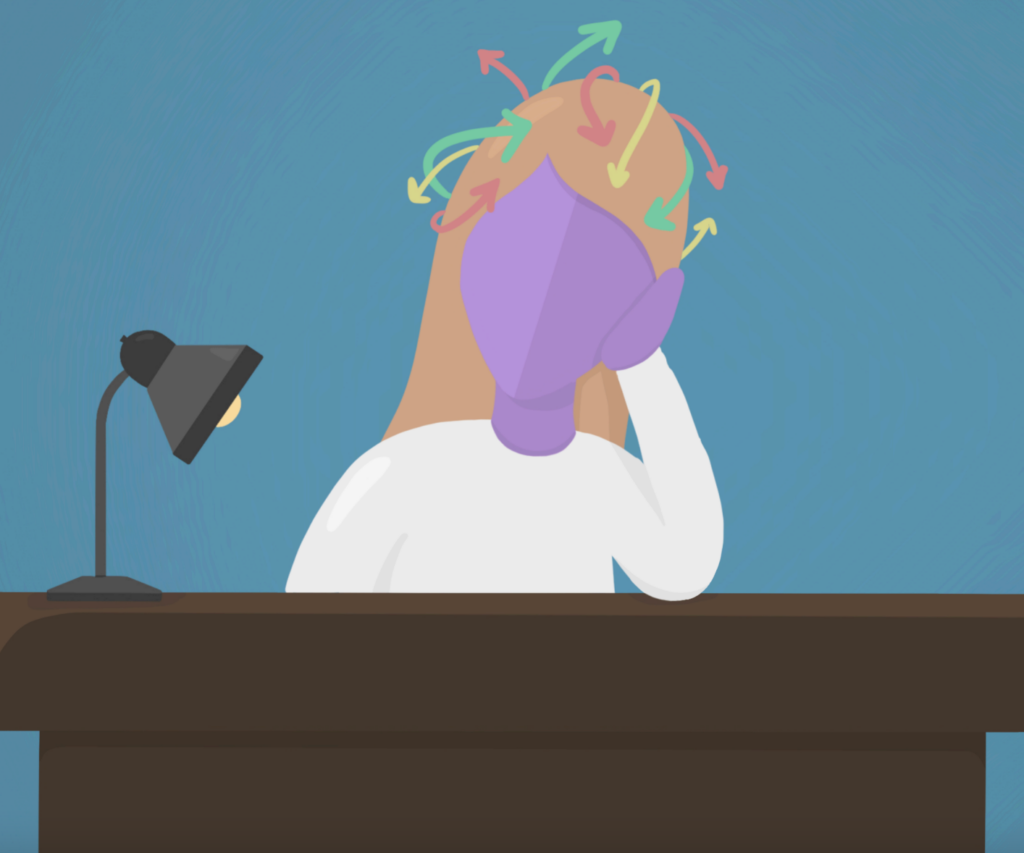 Alice Williams* is an intelligent, high achieving college senior. She has always done well in school, and prior to her freshman year of college, never considered that she could have attention deficit hyperactivity disorder. This all changed when, at 19, she tried adderall for the first time. She hoped it would help her study, not lead to an unexpected ADHD diagnosis.

Adderall is often used as a recreational “study buddy” because, according to the National Institute on Drug Abuse, it sends excess dopamine to the brain. In neurotypical users, this flood of dopamine causes a euphoric feeling. For people with ADHD though, the drug helps balance out the baseline dopamine deficiency that causes ADHD symptoms.

While Williams’ peers felt euphoric on adderall, she became calm and focused, a personal rarity. This experience pushed Williams to consider the possibility of having ADHD, and three years and six difficult semesters later, she finally pursued formal testing at 22. Williams received a diagnosis for inattentive ADHD and, for the first time, she considered: maybe I’m not just lazy. Her diagnosis gave a name and an explanation to her daydreaming, listening problems, struggles with memory, executive dysfunction and more.

Williams is not alone in her experiences. ADHD is a neurodevelopmental disorder that impacts one’s ability to regulate attention. It is typically diagnosed in childhood, but according to the Centers for Disease Control and Prevention, young boys are over two times more likely to receive a diagnosis than young girls. According to an article published by the American Psychological Association, this disparity occurs because the majority of research and diagnostic criteria focuses on how ADHD presents in young boys, ignoring how it presents in young girls.

Boys are more likely to display hyperactive-impulsive ADHD, which is characterized by being disruptive in class, having difficulty sitting still and acting impulsively. Girls are more likely to display inattentive ADHD, characterized by daydreaming, becoming easily distracted and feeling overwhelmed. Parents and teachers have learned to look for disruptiveness and high energy as signs of ADHD. Distractedness? Not so much. For this reason, many girls go undiagnosed and are left to struggle through years of school and work before realizing as grown women they have ADHD.

Dr. Karen Moroski-Rigney is one such woman. She completed years of higher education, a dissertation and years of teaching and working in writing centers before being formally diagnosed with ADHD and autism at age 31. She decided to seek diagnosis after being sent home for COVID-19. Instead of feeling the loneliness and anxiety many experienced, Dr. Moroski-Rigney felt that her quality of life drastically improved. She had more energy and a sense of calm that she had never known before. For the first time, she could completely control her surroundings, her schedule and the distractions around her.

Former MSU student and psychotherapist Bridget Marchese had a similar experience when she was diagnosed with ADHD at age 24. She always did well in school, but when pursuing her masters degree, she found herself struggling to complete work or find motivation. She researched her symptoms and ultimately pursued testing for her ADHD.

As a mental health professional and someone who experienced a late ADHD diagnosis, Marchese explained that “a lot of the time the people who were missed in childhood just end up researching it on their own and almost doing a self diagnosis, first in their 20s or so, and then they go out and seek help once they realize the symptoms ring true for them.”

Williams, Dr. Moroski-Rigney and Marchese all received their ADHD diagnoses as adults, likely in part because they are all high-achieving students and professionals.

“People who have ADHD are typically of average or above average intelligence. I think a lot of the time they end up developing these different coping mechanisms to fit in this neurotypical world and kind of get them through,” said Marchese about why many go undiagnosed.

Although many women with ADHD are intelligent and high achieving, it is utterly exhausting to constantly use coping strategies to meet the expectations of success. This draining and frustrating experience can lead to depression, anxiety, low self esteem, perfectionism and a number of other mental health struggles common in people with ADHD.

Williams was diagnosed with persistent depressive disorder and generalized anxiety disorder just before getting her ADHD diagnosis. She sees these diagnoses as working in tandem.

“They go together so much that I don’t know which is which when I’m having a hard time,” said Williams. “It’s so hard to accept that you aren’t lazy, because people are always like you know what you need to do, why can’t you just do it? And they seem to be able to take their own advice, but I can’t get my brain to work that way.”

For Dr. Moroski-Rigney, the exhausting experience of having undiagnosed ADHD led to a diagnosis for clinical depression at age 18. When she tried the prescribed antidepressants, they never made her feel less depressed. She resigned herself to being sad and overwhelmed for her whole life. However, when she realized she had ADHD and autism, she found that her depression was a side effect of being constantly overstimulated and overwhelmed. ADHD medication improved Dr. Moroski-Rigney’s quality of life in a way that antidepressants never did.

Williams, Dr. Moroski-Rigney and Marchese all benefited from their ADHD diagnoses. However, the process of testing and receiving care can be complicated, high stakes and financially inaccessible for many. Marchese administers ADHD tests, a process that involves an interview, self-report questionnaires, surveys about depression and anxiety, intelligence tests to investigate other possible cognitive disorders, computer tests to measure sustained attention and, for minors, interviews with parents and teachers. A person’s results will then be compared to results typical of ADHD to see similarities or differences. Examiners look at many different elements to confirm whether a person is experiencing ADHD or something that presents similar symptoms.

Marchese is especially aware that a diagnosis gives patients access to stimulant medications, which risks addiction. Testers have to be aware of potential malingering, wherein people mimic known symptoms to receive medication they don’t actually need. Marchese is also concerned about giving children medications that may not be helpful or could impact development. She errs on the side of caution when diagnosing, and often gives the least serious diagnosis possible for children to avoid the risk of addiction as they grow.

Even when testers like Marchese are working to support patients, the path to getting a diagnosis can feel frustrating and difficult to navigate. It took Dr. Moroski-Rigney six months of appointments with doctor, psychiatrists and therapists as well as referrals to receive an affirmative diagnosis. She is still working to receive disability accommodations from the Resource Center for Persons with Disabilities at Michigan State University. She also acknowledged her ability to seek diagnosis because she has access to health insurance, time to pursue testing and is financially stable. For many people, especially students and lower income families, the time and money required to receive a diagnosis is simply not a reality.

ADHD does not discriminate between gender, socio-economic status, race or culture, but the process of receiving a diagnosis and care does.

“We get told that normal exists and we need only work harder to achieve it. It’s a chronic invalidating of neurodivergent and disabled people,” said Williams.

Many women are pushed to fit their ADHD symptoms into the boxes of what normal is perceived to be when interacting with the larger world. This masking, or hiding, of symptoms is a way to get by in a neurotypical world, but leaves many people without support because their needs are invalidated, misunderstood or simply unseen.

As Williams, Dr. Moroski-Rigney and Marchese have shown; the road to a mental health diagnosis is rarely straightforward, and often paved with societal and financial obstacles. Privilege, power and intersecting identities all affect a person’s access to a diagnosis. This is a deeply unfair and frustrating truth, especially because a diagnosis can provide access to life-changing care and support.

Although access to a diagnosis is far from equal, a person’s right to a happy, healthy life should be. Acknowledging the barriers to access, Dr. Moroski-Rigney encourages anyone who feels that they are struggling, overwhelmed, unmotivated or experiencing symptoms of ADHD or autism to do research and, if possible, pursue testing.

Everyone with ADHD has their own story and experience, but those of people born female are often marked by being chronically overwhelmed and overlooked. If you resonate with the stories in this article, think you have ADHD or are struggling to manage your mental health, consider investing the time to do research, reach out to a mental health professional if accessible or look for support online or in your community. And in the meantime, be kind to yourself.

Jennifer Bell is a third year undergraduate studying professional and public writing. She works as a writing consultant and the undergraduate media coordinator for the Writing Center at MSU. When she’s not working, Jennifer can be found listening to podcasts, wandering the outdoors or escaping into a book.