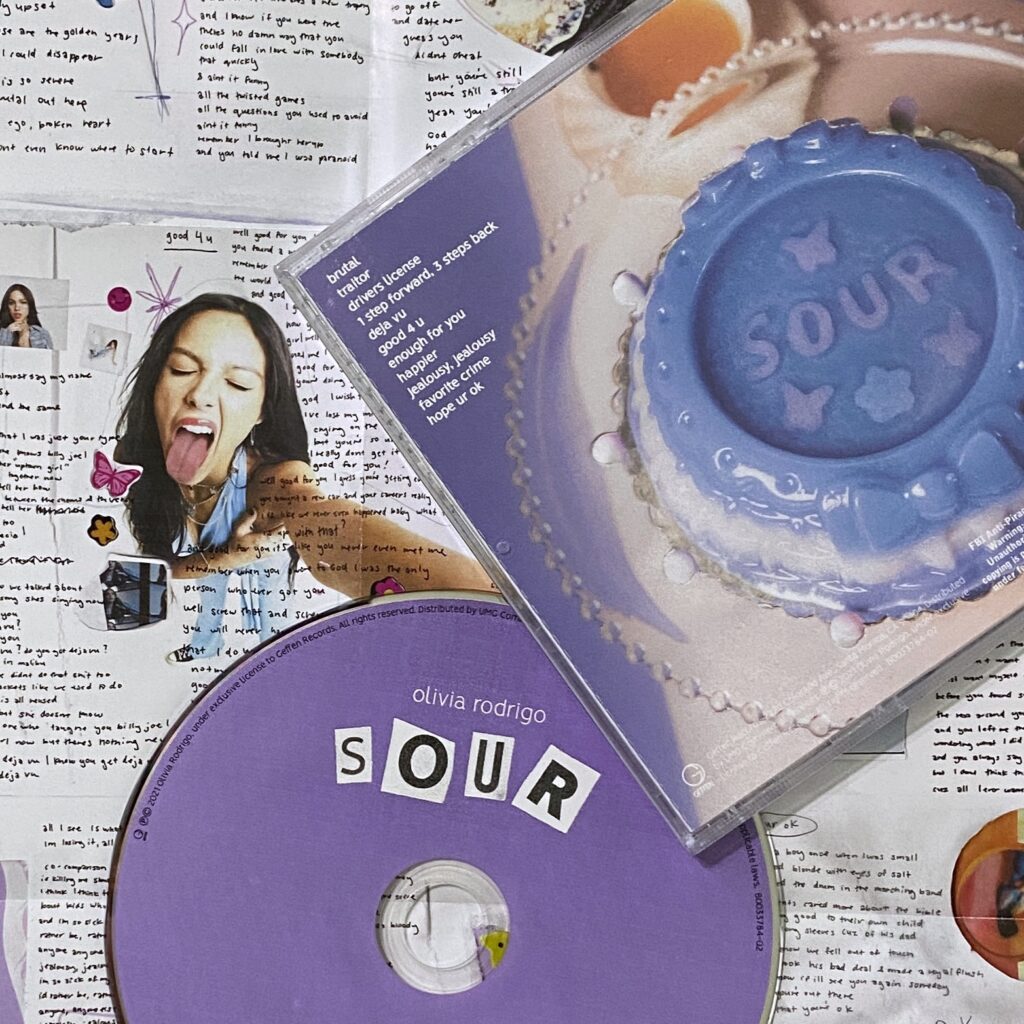 In her transition from Disney actress to global popstar, Olivia Rodrigo has quickly become a household name. The eighteen-year-old gained notoriety in early 2021 when her first single, “drivers license,” a classic heartbreak anthem, was released on January 4.

Rodrigo is the first Disney actress to skip signing with Disney’s own music label, Hollywood Records, and instead chose to sign with a major label, signing with Geffen and Interscope Records. Her debut album, “sour,” was released on May 21 and was a huge success, making history on Spotify with the  biggest opening week for a debut album ever.

Although she is new to the pop scene, Rodrigo has been writing songs for a long time. While starring as Nina Salzar-Roberts on “High School Musical: The Musical: The Series,” she wrote the song “All I Want.” It was released as a single from the show’s accompanying soundtrack, and despite not being promoted, it became extremely successful on TikTok, with the song amassing over 310.8 thousand videos on the app.

Rodrigo was introduced as a true solo artist with her first single, “drivers license.” With that hit song, Rodrigo broke countless records. including most single-day streams for a non-holiday song on Spotify, the biggest first-week on both Spotify and Amazon Music, and hitting number one on the Billboard Hot 100 as the youngest artist to debut on top of the chart. It stayed there for eight weeks, which made it the longest-running number one for a debut single.

The theorized inspiration for the song was actor Joshua Bassett, who starred alongside Rodrigo in the Disney Plus series. The two were rumored to have been dating, but quickly after their supposed flame died out, Basset was seen with musician and actress Sabrina Carpenter. It didn’t take long for the story of a love triangle to unfold, which made Rodrigo’s first single such a hot topic.

Since the release of “drivers license,” the young singer has found herself involved in multiple controversies. While her album was met with generally good reviews and massive success, Rodrigo has been called out for copying other artists, from the likes of rocker Elvis Costello to Courtney Love.

Following the success of her first song, her second single, “déjà vu,” released on April 1 and debuted number eight on the Billboard Hot 100, making Rodrigo the first artist ever to debut their first two singles in the top ten. Her third pre-release single, “good 4 u,” was released on May 14, hitting number 1 in 16 countries, including the US.

The album’s fourth track, “1 step forward, 3 steps back” listed Taylor Swift and Jack Antoff as songwriters. The credit was included on the initial release of the album because Rodrigo’s song contained  a piano riff from Swift’s “New Year’s Day.” Instead of a sample, Rodrigo chose to use the method of interpolation, in which an artist replicates part of a different song through re-recording, rather than using the original recording.

This is not Rodrigo’s only inspiration from Swift, however. In April, in an interview with Rolling Stone, Rodrigo called “Cruel Summer” by Swift one of her favorite songs, adding that it inspired her song “déjà vu.” Come July, Swift, Antoff and St. Vincent had been added to the songwriting credits for the bridge.

Similarly, following its release, the song “good 4 u” had been compared multiple times to Paramore’s 2007 hit “Misery Business,” and mashups of the two songs were becoming increasingly popular on TikTok, with a video by Adam Wright receiving over 3.8 million views. However, while the song came out in May, it wasn’t until late August that Paramore singer, Hayley Williams, and former guitarist, Josh Ferro, were added to the song’s credits as songwriters.

Rock-inspired “brutal” was the next to befall criticism. Twitter user Billy Edwards (@biiilyedwards) shared an article from The Guardian referencing Rodrigo’s supposed plagiarism, saying, “No s—. First song on the album is a pretty much direct lift from Elvis Costello.” He’s referring to the guitar riff used at the beginning of the song, which has drawn comparison to Costello’s 1978 hit “Pump It Up.”

Costello was quick to respond, saying in a reply tweet, “This is fine by me, Billy. It’s how rock and roll works. You take the broken pieces of another thrill and make a brand-new toy. That’s what I did.” Costello also included the hashtag #subterraneanhomesickblues, a call-back to statement he made in his autobiography from 2015, where he said, “‘Pump It Up’ obviously took more than a little from ‘Subterranean Homesick Blues.’”

While Rodrigo has been accused of copyrighting music, she has made amends by choosing to go back and credit these artists on the album itself. And while she continues to receive criticism, arguably the comparison that has gotten Rodrigo into the most trouble is her promotional photos for her livestream event called Sour Prom. The photos feature Rodrigo, dressed as a prom queen, complete with a tiara, a bouquet of flowers and mascara streaming down her cheeks. Courtney Love was quick to point out that it bears a strong resemblance to the album cover of her band Hole’s 1994 album. “Live Through This.”

There is no denying the similarities between the concepts and photos, and Love took to social media to share her thoughts, with the caption “Spot the difference! #twinning @oliviarodrigo” on a now-deleted Instagram post. Rodrigo quickly commented, “love u and live through this soooo much.”

“Olivia—you’re welcome. My favorite florist is in Notting Hill, London! Dm me for deets! I look forward to reading your note!” Love replied.

The exchange seemed innocent enough, but Facebook comments on the now-deleted post reveal that Love was not happy with the situation.

“Stealing an original idea and not asking permission is rude,” Love said in response to a fan’s comment suggesting that Love should be flattered rather than offended.

However, Love calling it an “original idea” may be a bit of a stretch. In 2019, Ellen von Unwerth did an interview with Another Magazine where she revealed the history of the iconic album cover. “Courtney Love called me. We were on the phone for one hour. I didn’t say much but listened, and Courtney had the idea of re-enacting the scene of the movie ‘Carrie,’ which I loved, too.”

Love has since denied this, claiming in another Facebook comment, “don’t dare gatekeep me. I’m alive… It WAS IN FACT AN ORIGINAL IDEA! No one had done ‘it’. I pride myself on having them.”

The truth is, pop culture is so over-saturated that it can be difficult to find a truly original idea. It is also entirely possible for more than one person to have a similar idea or vision for their artwork.

All of Olivia Rodrigo’s offenses employ a very loose definition of plagiarism, with songwriting credits being added to songs for simply sounding similar, not for directly copying anyone else. And, with Rodrigo being only 17 when her album was recorded, it is understandable that a new face in the industry would take inspiration from the content around her and, naturally, have some overlap with existing ideas.

No one wants to be accused of plagiarism, and “sour” has a lot more post-release songwriting credits being added than most albums. What does this mean? Perhaps it’s fear of legal trouble on the side of Rodrigo and her team, or perhaps it has to do with being a teenage girl who is trying to find her place in an extremely competitive environment. Whatever the case, it is clear that Rodrigo listened to the accusations she received and acted accordingly.

Makes you wonder if she sent those flowers to Courtney Love, huh?