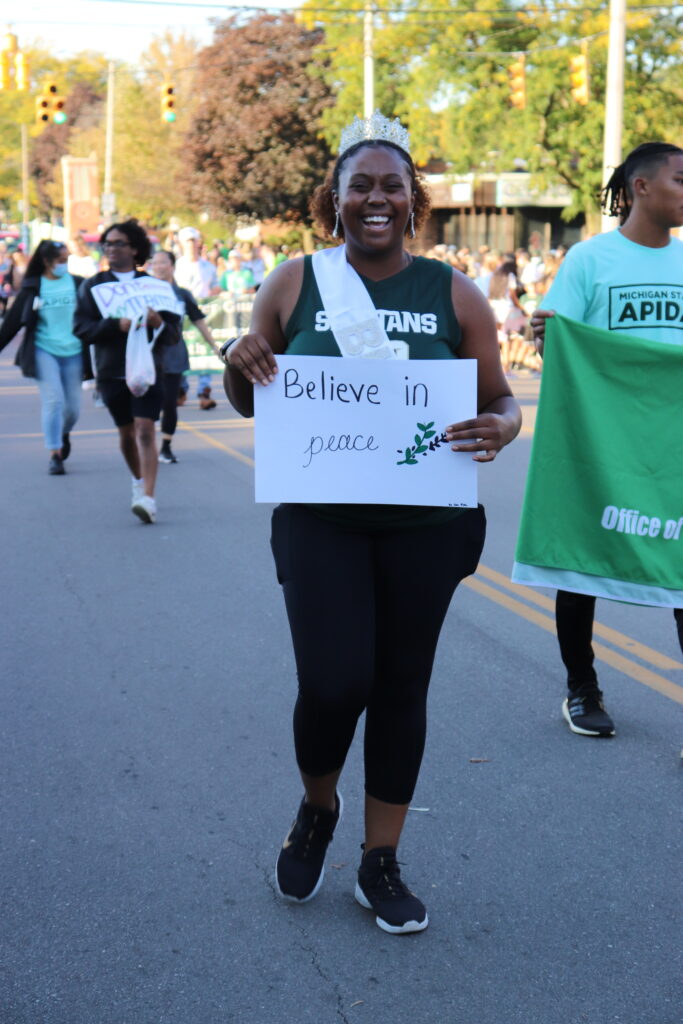 The return to Michigan State University’s campus this year marks the return of many traditions and opportunities students have been unable to indulge in for over two years. One of them is MSU Black Students’ Alliance’s Black MSU Pageant. On Sunday, Sept. 26, Cara Drew was crowned Miss Black MSU in the MSU Union Ballroom.

Drew said that there are “two freshman classes,” referring to the freshman class and the sophomore class who are experiencing campus life for the first time. She says it is imperative that the students who experienced MSU pre-COVID show the newcomers the full college experience and how to maximize their time—a goal she seeks to achieve.

This marks the fifth Black MSU Pageant since 2013 and Drew’s first pageant.

When asked about the experience, Drew said it took hard work. “We had been rehearsing since June, so from June through September, I would spend four hours a week rehearsing up until school started, and then it was like every single day the week before the pageant,” she said.

According to Drew, the days right before the pageant were the most stressful. “I was driving up to my hair appointment at 6 a.m. I didn’t get home until after midnight. I was crying on my way home because my hair wasn’t exactly how I had planned … I could’ve cried at any moment, but I had to keep it together because if I didn’t, it was gonna be over with, and I had to get through the day.”

Drew said it was worth it in the end.

The pageant contained five segments in which the contestants showcased their personalities and interests. Each contestant participated in introductions, a Q&A on the history of MSU and the Black Students’ Alliance, a talent show, a presentation on prospective initiatives the contestants would implement if they were given the title of Miss Black MSU and an interview with open-ended questions.

For Drew’s talent, she served the judges her homemade banana pudding. Considering her win, it’s safe to say she is certainly talented. Drew recalls a review of her pudding, “When I made it in rehearsal, some dude in the audience said it was ‘bussing.’” In case you don’t know, “bussing” is an African-American vernacular used to describe delicious food.

This year’s winner is nothing short of ambitious and compassionate. “Five years from now, I see myself in the middle of a Ph.D. program,” she said. “Where—only God knows—[I’ll be] working on something relating to equity in schools for children.” She said she wants to see what can be done from a higher position for students who are overlooked. She wants to give such students better opportunities and a voice.

Miss Black MSU has goals for personal development and exhibits a sense of self. Drew said that she aspires to be well-traveled and that she is keeping her options open about future living. Cara Drew is a daughter, sister, teacher and student who loves children and serving the youth. Not only does she love baking, but she loves “making people happy,” in turn lifting the spirits of others, in the spirit of Miss Black MSU.

Kristian Wayne is a senior studying creative advertising and journalism. He spends his time writing, taking photographs, and working as the head of advertising at MSU Telecaster’s Giraffe House. He currently interns at WKAR for the social media department. He is a song-writer, copywriter, actor and creator who hopes to practice freelance photography and creative media. Instagram: @chillonk_