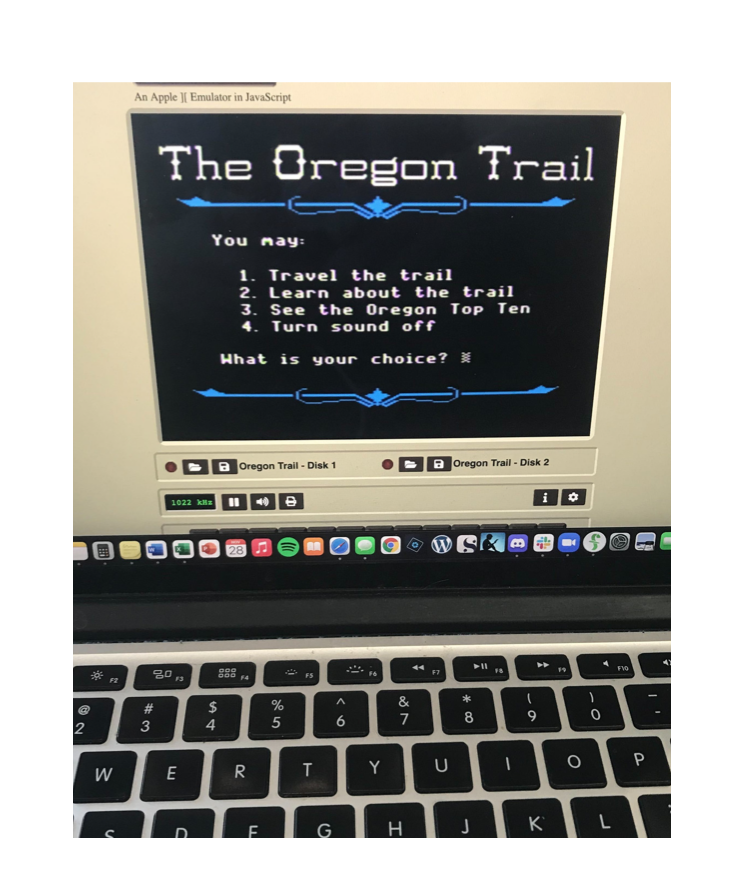 In 1971 Don Rawitsch, Bill Heinemann and Paul Dillenberger developed a game that would become a cultural phenomenon. OREGON was a collaborative classroom experience aiming to teach kids about historical events through text-based choices. It evolved into The Oregon Trail, a game that gained a cult following due to its iconic brand. 50 years later, the game has grown into its own genre.

The earliest iteration of The Oregon Trail was a text-only software called OREGON. The 1971 “game” ran on a mainframe computer attached to a teletype machine. It was tested on a group of Minnesota 8th graders, who sat and read what the machine printed in response to their choices. Their choices dictated their wagon’s path on the historical Oregon Trail.

Rawitsch saw potential in the game software he developed. When he joined the Minnesota Educational Computing Consortium (MECC) he uploaded OREGON to their timeshare computer system. This allowed him to test it on a wider student audience. He also published the BASIC code of the game in Creative Computing in May 1978. This allowed it to be adapted by other programmers.

Eventually, MECC re-released their popular games on floppy disks for the Apple II system. This allowed their educational games to be licensed for use by school districts outside of Minnesota. MECC also adapted the games to the Atari 400/800, Commodore 64 and the RadioShack TRS-80 for the school computer market.

In 1984, MECC decided to assemble a team to reinvent The Oregon Trail game for the Apple II home market. It had been the most popular educational game MECC released and desperately needed an update. R. Philip Bouchard, who remains the leading source of information on The Oregon Trail game history, was named the project lead. His team of five was tasked with making a radical new version of the popular game.

After months of collaborative work the team presented the end result of the project. They had developed the innovative game that would become iconified as The Oregon Trail. This version was the first to have graphics, and featured more gameplay options than the earlier versions. It even had the quintessential phrase “You have Died.” (“of Dysentery” was added later by popular culture).

The 1985 version is among those that are still available to play via emulators on Bouchard’s Oregon Trail website. died-of-dysentery.com is a well-maintained online repository of Oregon Trail game information.

“I decided to create a design that was far more complex and detailed than the original. At the same time, I had to be certain that the new design was as entertaining as the original. Because the old version appealed primarily to boys, I wanted to create a version that would appeal to everyone. In other words, a version that supported multiple interests and playing styles.”  Bouchard said about the design that his team brought to life.

Bouchard was limited by the technology of the time, especially the graphics options and RAM space of the system. He let many of his original design goals go in favor of adding detail to the concepts he could include.

Besides adding graphics and making the game accessible to a wider audience, Bouchard endeavored to make the game replayable. This meant making it more complex and adding more paths to success and failure. Something as simple as not bringing enough food per person could set off a chain reaction down the trail.

He also wanted to correct the historically inaccurate violence how Native Americans were presented. In the original game, “hostile Indians” would raid the wagon circle at night. The only available solution was to shoot at them with rifles. The 1974 timeshare version of the game changed this to “hostile riders” and erased Native Americans from the game. In the 1985 version, hunting was kept as a historically-accurate activity. But the night attacks by animals, bandits and hostile riders were done away with due to their inaccuracy.

Bouchard had plans to bring in more Native American presence to the game. He added several conversation points with Indigenous guides. These guides would speak on how their lives were being changed by the influx of settlers. He also included a choice to pair with a Shoshone guide to cross the Snake River that ensured success.

“My single biggest regret regarding The Oregon Trail is that I had to abandon most of my ideas for complex, nuanced interactions with Native Americans.” Bouchard said in a detailed post about the game’s creation on his website “The Philipendium.”

The presence and treatment of Native Americans in The Oregon Trail franchise became top priority for the 2021 Apple Arcade reboot. According to Anna King on NPR’s “All Things Considered” Indigenous historians were brought in to consult with Gameloft developers. Their feedback eliminated some of the tropes that had been assumed in the early stages of their development process.

The 2021 reboot is the most recent in a line of games based on the 1971 concept of OREGON. Rawitsch’s game necessitated the 1985 remake, and the popularity of the game led to near-constant reanimation. Over the span of 50 years, there have been 21 versions of the game overall.

The game was ubiquitous in schools for over 30 years, creating a common mandatory experience for those generations of primary school students. This means that nostalgia plays a large factor into why The Oregon Trail game is still being remade today. And the game is not only being remade, it’s being adapted to other mediums.

In 2016, Pressman Toy Company released a card game version of The Oregon Trail through Target. The game had the same concept of the 1985 game but played out on tabletop. This game generated a later expansion that focused on getting food for the expedition, also available only at Target. In 2018, a full-size board game version of The Oregon Trail was released that featured slight changes to gameplay, but was essentially the same concept.

Also in 2018, Author Jesse Wiley published a series of choose-your-own-adventure books with the same basic plot as the game. The CYOA format allows for many outcomes, positive and negative, and generates re-readability. The books were aimed at teaching the gravity of choices made by settlers to young readers.

For adults, author Lauren Reeves released a quirky advice book called “…And Then You Die of Dysentery: Lessons in Adulting from The Oregon Trail”. The advice book is a hilarious interpretation of the educational gameplay for adults who grew up with The Oregon Trail.

Nostalgia has generated a market for merchandise as well. HotTopic released a funny graphic tee, prompting other online vendors to jump on the trend. On RedBubble there are dozens of options for Oregon Trail merchandise.

The game and its iconography are still popular, leading to the near-annual release of more Oregon Trail game content. And the interest in the real history behind the game continues.

R. Philip Bouchard visited Chimney Rock, Nebraska in 2019, where the director of the museum related that there were still patrons who visit the site because of the impact the game had on them when they were younger.

Hearing that connection reaffirmed Bouchard’s pride for the real geography he included in the 1984 design. “[It] was based on the idea that the entire journey would consist of individual segments. Each segment begins and ends at an important landmark or geographical feature. Kids who played the game would remember all these places, which could serve as anchors for additional knowledge.”

In nearly 50 years as a cultural icon, The Oregon Trail Game has done that and more. It was installed in schools across the country for decades as a collaborative classroom experience, and grew into a genre-defining series of game. Now, the game continues to be adapted and merchandised in other mediums. R. Philip Bouchard endeavored to take the original 1971 concept and make a new version that kids could bond over beyond the classroom. Now that bonding can continue generationally through the experience of new Oregon Trail games.