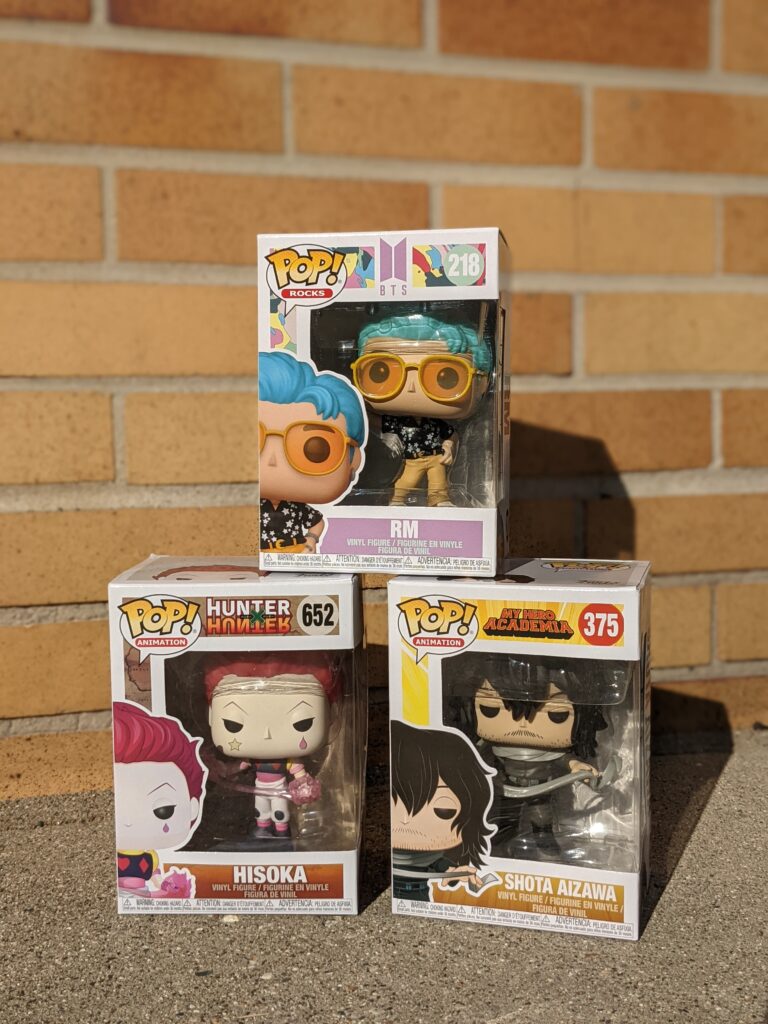 Since Funko Pops first popped onto the scene in the 90s, they have grown in popularity and expanded their character line extensively. If there’s a cartoon series, anime, movie series or television show, there is almost certainly a collection of Funko Pops to accompany it.

Some of these Pops are limited edition and resell online for ten times the original price. Others can be found almost anywhere: the mall, a drugstore or even a 7-Eleven. Funko Pops have garnered a cult following and partnered with some of the most popular television shows, movies and anime.

Founded in 1998 by Mike Becker, the first Funko figures looked much different than the iconic look they are known for now. They originally manufactured bobbleheads, coin banks, and hand puppets that captured nostalgic figures such as Batman, Big Boy, Popeye and more.

In an article for Rolling Stone, reporter Reyan Ali said, “Mike Becker was in the market for a vintage coin bank depicting the Big Boy restaurant mascot. Finding that the item he wanted was going for hundreds of dollars on eBay, he figured that he could produce his own.” And so Becker ran a business from his home that fulfilled his collector dreams.

According to Ali, Becker created products focused on his favorite characters and interests. His business was successful, but for it to become a household name, something would have to change. That change came in 2005 when Brian Mariotti bought the business.

Mariotti was a serious collector himself. Ali said, “He made his house’s first down payment by selling his Pez dispenser collection.” So, as someone familiar with the collecting hobby and involved as a customer in the figure business, Becker seemed hopeful in Mariotti’s leadership.

About 5 years later, Mariotti proved that Becker sold his business to the right person. Around 2010, Funko debuted their iconic Funko Pops as they are known today. With oddly square and round shaped heads and big pupiled eyes, these Pops became Funko’s most iconic product.

There are several possible reasons behind Funko Pops’ popularity. One is the adorable design of the figures. In particular, Funko Pops are known for their enormous pupils, which are a cuteness signal for humans. According to Healthline, “People typically find those with larger pupils to be more attractive.”

Another adorable design element are the figures’ giant heads. According to ZME Science, “Some of the things the course points to as conducive to cuteness are: A high head-to-body size ratio.”

ZME Science also says, “Smaller mouths are cuter, as we subconsciously register bigger ones as being threatening or dangerous.” This makes sense since most of Funko’s designs don’t have any mouths, adding to the cuteness factor.

Creative director for VMG Studios Bryan Johnston even said, “Sex sells. But cute sells more.” And there is scientific evidence that shows why cuteness is so attractive to human beings.

In an article for How Stuff Works, Laurie L. Dove said, “It all has to do with the survival of our species: We’re drawn to cuteness because we’re hardwired to notice human babies.”

Think about what most people find cute about babies: their giant pupils, their huge head in comparison to their tiny bodies and their round faces. Funko has combined all of the elements of what humans find cute in babies and turned them into a vinyl figure.

What could make these cute elements any better? Having them resemble iconic characters. Another possible reason Funko Pops are so popular is because of the variety of characters they offer from multiple fandoms.

There are Funko Pops of characters and icons from The Office, Breaking Bad, Star Trek, Harry Potter, BTS, My Hero Academia, My Chemical Romance, Run DMC and even a Kool Aid packet.

For someone who may be a diehard fan of Kool Aid, or even Spam, they can purchase the perfect decor for their home that showcases their interests and passions.

Not to mention how affordable they are. Starting at $11, buyers can easily begin a collection of their favorite characters and icons. Collectible vinyl figures for a genre such as anime can be as much as $500. However with Funko, you can have the entire collection of figures from your favorite show for around $100, assuming there are around 10 characters available for purchase.

Funko has given fandoms a cost efficient and accessible option for them to enjoy their favorite characters and icons. However, a continued increase in accessibility could cause a loss of excitement around their products. This is why the brand introduced limited edition Funko Pops.

Limited edition products earn even more hype. Brands such as Supreme have shown just how effective limited products can drive up demand for their brand. Supreme releases a limited amount of items. Because of this, when they release new collections, there are lines down the block of people waiting to get their hands on these limited pieces.

Funko has created the same effect with their limited edition Pops. In an article for  Impact, Ramona Sukhrj said, “Like supply and demand, the scarcity principle says that the more rare or unattainable something is, the more valuable it is.”

And so, just as limited edition Supreme items sell for up to 10 times the original price, limited edition Funkos are creating the same phenomenon. Originally going for $11-$15 each, there are sellers listing the figures for as much as $700.

Looking at how affordable Funko Pops normally are, these resell prices probably create anxiety for buyers, influencing them to purchase new figures from their favorite series or bands when they initially release. This drives up the popularity and prices of Funko.

The combination of Funko Pops’ cuteness, affordability, exclusivity and diversity have all contributed to their rise in pop culture. Hot Topic, which has become the epicenter of pop culture merchandise even has become one of Funko’s biggest partners, showcasing just how impactful the vinyl figures have become in pop culture.

While the success of Funko seemed to have appeared out of nowhere to most, they have been working diligently with fandom culture since their birth to create merchandise for fans of any pop culture figure. Their affordability has made fan culture accessible to anyone that wants to start a collection or appreciate their favorite icons.