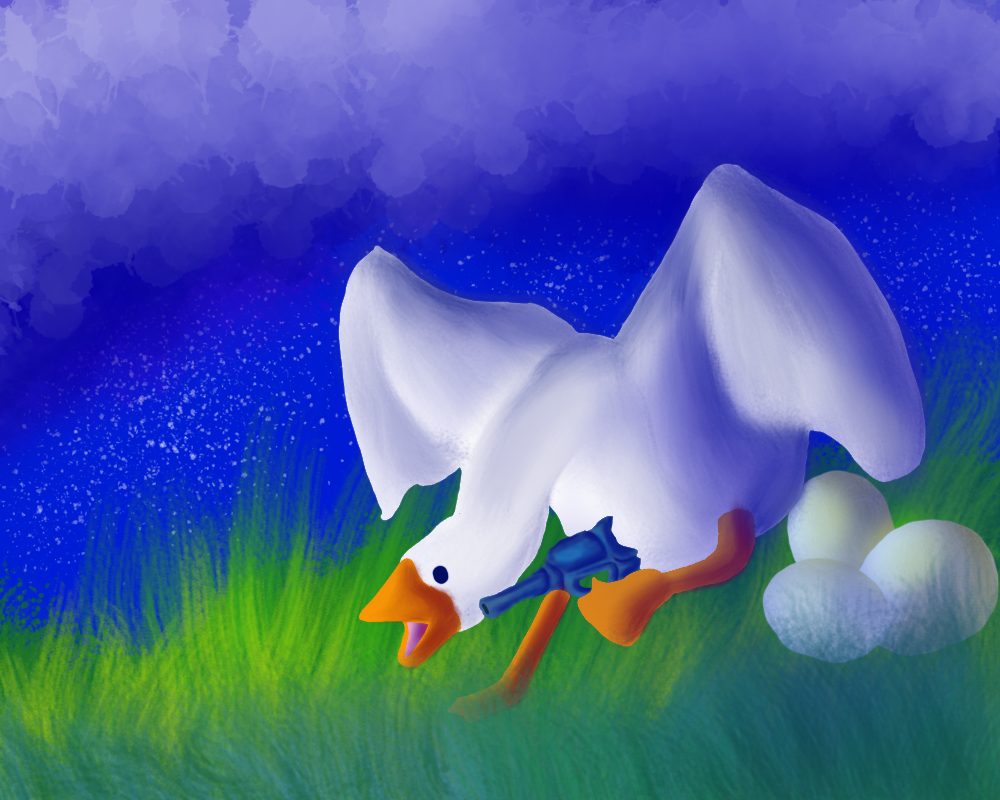 “Now look, I’m an optimist. I like to think that one day geese and people can one day live side-by-side in peace,” said award winning journalist, Anderson Cooper, in this clip, “but …. it doesn’t look like that day is coming anytime soon.”

Since the success of Untitled Goose Game, which went on to sell over a million copies by the end of 2019, the threat geese pose on the average person has become more well known than ever. At the same time, people are perhaps more willing to underestimate geese. After all, how threatening could a bird actually be?

The answer is very.

One YouTube video shows a conflict between two geese and a gorilla at a zoo. Those who have any sympathies toward large, innocent apes should watch at their own risk. These geese threatened and overpowered this gentle giant with incomprehensible ease. Eventually, they forced him to abandon his territory entirely and retreat to the safety of a nearby structure.

These vicious winged monsters don’t just limit their acts to physical destruction; no, they’ve been known to target the economy as well. According to this report from the National Wildlife Research Center, geese could cause over $740,000 worth of damage per year in just one New Jersey county.

Even digital spaces aren’t safe from these honking menaces. According to an article on GamesRadar+, there is a specific application designed to infect downloaders’ hard drives with their own personal goose. This goose will then track mud across the desktop, show its host memes or even steal the mouse cursor! It’s unclear whether the programmer was forced to write the code at beak-point or if they just genuinely hate goodness.

But while questioning the game developers’ motives, it might be worth it to look at the motives of geese themselves. After all, why are they so notoriously aggressive? Are they motivated to try and wipe out humanity to reclaim Earth for themselves? Are they all dealing with untreated anger management issues? Are geese just devoid of souls?

It’s the last one.

However, most experts refuse to accept this simple fact, and instead have crafted their own explanations for geese aggression. They would tell you that geese are large, cumbersome birds who choose to build their nests next to spaces of water and grass. That geese developed aggressive, and territorial instincts to protect their mates and young. They would also say that another reason for goose aggression is the increasing familiarity most geese have with people. Geese tend to live in parks away from predators and close to humans, where they easily acclimate and lose their fear of them.

Scientists would also tell you that geese get pretty aggressive around the spring, which is their mating season and when they settle down to have their young. Of course, one should be afraid of geese all year round, but they should be especially wary in the spring.

So, with this information, what should the average person do when they see a goose in the wild? Should they take justice into their own hands and attack the thing? It is strongly recommended that they don’t. Although the animal in question is a monster, animal abuse is wrong and more importantly, aggression puts the human in great danger

Geese have sharp, teeth-like, protrusions inside their beaks, and their wings have evolved to help them beat predators away. Though goose attacks rarely result in death, it isn’t unheard of. Not only that, but geese can break ribs or cause lasting trauma.

No, for those unfortunate enough to cross paths with a goose, the best tactic is to keep their distance and avoid potentially threatening its territory. Most of the time, if one stays away from it, the goose will stay away too. People should especially avoid feeding geese since this can reinforce their fearlessness toward people and make them more aggressive in the future.

If a goose makes a move toward someone and they think it might attack, they should first pay attention to its body language. If it is standing up with its head back and looking at them with one eye, it’s sizing the person up. If the human makes loud noises and moves toward it, they’ll probably scare it off.

However, if a goose is actively moving toward them, head low to the ground and hissing, it’s getting ready to attack. The person should start to stomp their feet on the ground and clap. If it continues to move closer, they may be forced to swing their arms and run at the goose. Geese often win their battles through intimidation, so showing a lack of fear is a good way to force the goose to retreat.

The most important thing to keep in mind is to never run away from a goose. Geese will chase runners down and hurt them to make sure they stay out of its territory for good. Showing geese any fear is just encouragement for them to keep going.

Unfortunately, it seems that geese are here to stay, and civilians don’t have much choice about that. However, people are not totally defenseless against these clever avians—at least not yet. If people are smart and careful, they can avoid attracting their ire and one day, as Anderson Cooper said, they may even be able to develop an uneasy peace with these feathered abominations.

If you are, rightfully, still worried about a potential wild goose attack, this article by Cackle Hatchery can help you learn good strategies to defend yourself.

(Art thoughtfully provided to The Current by Alison Keagy, @TheWorstGoose on Twitter)