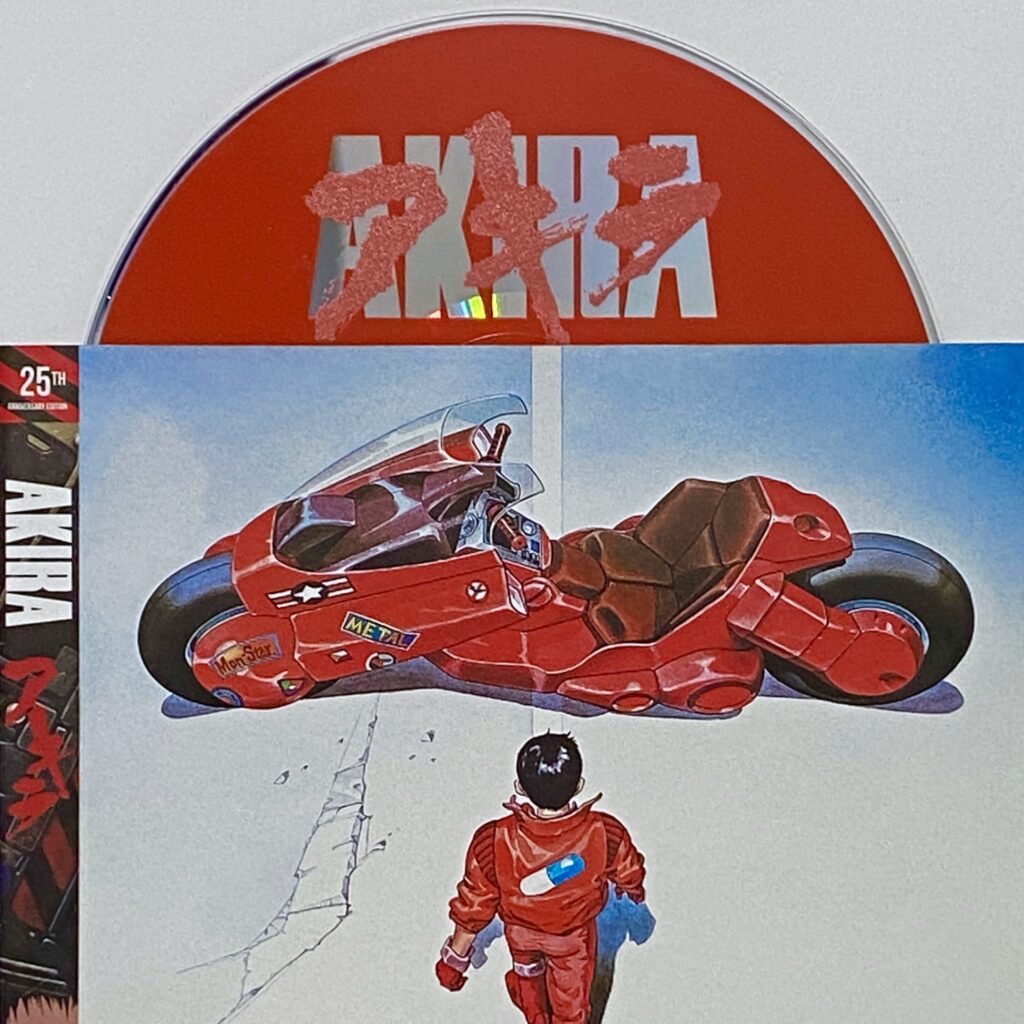 The 1988 Japanese animated cyberpunk action film “Akira” (アキラ) has been cited countless times as one of the most influential films of all time. From The Matrix to Looper; from Inception to Stranger Things and so much more, “Akira” has influenced pop culture in a way that no other movie has been able to. To this day, creatives are proud to admit they’ve been inspired by “Akira.”

“Akira” is based on a manga series written by Katsuhiro Otomo, who was initially hesitant about it being developed into a film. However, when offered complete creative control over the project, he obliged, writing the screenplay with the help of Izo Hashimoto and directing it as well.

“Akira” follows Kaneda and Tetsuo, two teenagers who are part of the many biker gangs spread throughout Neo-Tokyo, a messy rebuilding of Tokyo, which was destroyed 31 years prior. When Tetsuo begins to discover his latent telekinetic powers after a biking crash, the characters and audience are taken on a wild ride involving mad scientists, corrupt politicians, seedy military projects and forces far beyond human control. The film touches on themes such as mass destruction, the power of science and technology, and questioning the meaning of life and existence. And that’s putting it lightly.

The film takes its content from the manga series of the same name, which ran for eight years. It was released in biweekly installments in Young Magazine between December 1982 to June 1990. With the film releasing in ’88, it actually predated the fully fleshed out ending of the manga.

With the “Akira” manga spanning over 2,000 pages, it would be impossible for a single film to fulfill every aspect of the manga’s plot, meaning many important events and characters were cut for the sake of the film’s budget and run time. However, as a film, “Akira” does an incredible job of preserving the main message and several important plot points from the manga, due largely to Otomo overseeing the creation of both. Still, many fans of the franchise have advocated for the viewing of the film in conjunction with a reading of the manga.

“Akira” is an important film for its treatment of technology and science, which stood apart from other movies of that time. Movies during the 80s, animated or not, had a strong fascination with technology and an obsession with the seemingly endless possibilities that it held (think “Star Wars,” “Back to the Future,” “The Terminator,” etc). Much of this technology was shown in a positive light, highlighting ways that future problems could be abated or avoided entirely with its aid. “Akira” is the exact opposite of this.

Rather than glorifying technology, “Akira” explores the disasters it can cause, drawing inspiration from both real and imagined situations. The story takes place in the year 2019, following Tokyo’s destruction in 1988 by what was believed to have been a nuclear bomb. This explosion eventually led to a third World War, leaving Neo-Tokyo to rise from the ashes.

Neo-Tokyo is a broken city. Teenagers run rampant in violent bōsōzoku gangs (a Japanese subculture revolving around customizing motorcycles), and the characters shown to be part of them are truly products of their environment, many of them violent delinquents. There is plenty of civil unrest, resulting in protests and riots that are stomped to a halt by police. Politicians are shown to be corrupt monsters who will stop at nothing to gain the power they so desperately crave. Scientists exploit and try to contain the science and technology they cannot understand, which only adds to the danger lurking around every corner of the city.

In truth, as the audience discovers, Tokyo’s destruction was the result of a burst of energy caused by the film’s namesake, a young kid named Akira. His psychokinetic powers had been stoked by the government until they were stronger than he could control, until one day he caused the brutal destruction of the entire city. The rest of the world mistook this explosion as the result of a nuclear bomb, leading to WWIII.

The connection to true events is not subtle. The bombings of Hiroshima and Nagasaki during WWII caused mass destruction and an excess of civilian deaths, an experience which carried over heavily into Japanese pop culture. “Akira” in particular has a morbid fascination with nuclear technology and the atomic bombing. Themes exploring the tragedy and chaos that follows the destruction of a major city are explored, and there are even a few panels in the manga that clearly resemble the mushroom cloud.

Technology and science are not shown as the saving grace of humanity. It’s clear that scientists in Neo-Tokyo are more afraid of science than anything, though they still try desperately to wrangle it into their control. It becomes increasingly obvious throughout the film that while power and control is limited, science is limitless.

In addition to the film’s intense and riveting subject material, “Akira” has been praised for its beauty. It was like nothing no one had ever seen before, and even today, appreciation for the art of the film runs deep.

When talking about animation, people often discuss animation being done in ones, twos or threes, sometimes even higher numbers. The number has to do with how long an image stays on screen in relation to frames per second. For example, if an anime was shot in ones at 24 frames per second, that means for every second of film there would be 24 separate frames, each individually animated in intense detail.

At the time, animated films were usually shot in twos and threes. Shooting in ones was time consuming and difficult, so it was done sparingly. However, a large portion of “Akira” was shot in ones. While less eventful scenes were animated in twos or threes, action scenes were shot in ones.

Before digital animation techniques were developed and honed, animation was done using cels, which are hand drawings on transparent celluloid sheets. One frame typically consisted of multiple cels layered on top of each other to comprise a complete image. Over 160,000 animation cels were used in the making of “Akira,” and scenes that featured dialogue were illustrated painstakingly to fit with pre-recorded dialogue. This attention to detail resulted in incredibly smooth, fluid animation that helped “Akira” stand apart from other animated films of the time.

The color palette of the film is incredibly rich and vibrant, largely due to the fact that much of “Akira” takes place at night. In fact, night scenes in animation are known to have an increased demand for color, a reason that many animators try to avoid scenes that take place at night. 327 colors were utilized for the film, a record-breaking number for the time. 50 of these colors were created specifically for it.

Upon its initial Japanese release, “Akira” was a moderate success, becoming the sixth highest-grossing film of the year. However, it was its North American release that truly cemented the film’s popularity and impact, serving as the West’s first true introduction to anime––both as a genre and as an influence.

When “Akira” had its first limited North American screening in December 1989, it served as a culture shock for a number of reasons. At the time, Western animated films were aimed at children, and there was little market for adult films in the same medium. “Akira” was the first animated film that was violent, gory, and altogether not-safe-for-children the way that other popular animated films of the time, such as “The Little Mermaid” or “The Land Before Time” were. This shocking release elevated the movie’s status from cult classic to a cultural phenomenon.

While it was partially the shock value that contributed to the film’s popularity, there was a lot more at play. Yes, “Akira” had blood and gore and drugs and swearing and nudity and… the list goes on. Yes, the subject matter was dark and depressing and tinged with existential dread. But it was more than just that. “Akira” was beautiful and gritty and unlike any other animated film of the time. It opened up both the West and the adult population to anime, proving that animation has no borders and no age range.

“Akira” grossed over $49 million globally, $1 million of that being in the United States. Following its success with Western audiences, the film was released on VHS via Island World Communications, selling over 260,000 tapes in the United Kingdom, the United States and Europe. High sales upon its VHS release were enough to inspire the creation of Manga Entertainment, a producer who later took over distribution.

Despite the title, Manga Entertainment focuses primarily on the production and distribution of anime in the United States. The perfect storm of the success of “Akira” and the creation of Manga Entertainment left the company with a hefty sum of investor dollars, which they then used to co-produce other anime classics. One such film is the original “Ghost in the Shell,” another hugely popular movie that has had major influence in the film industry since its release.

Manga Entertainment continued to bring animated content to the United States, though not without controversy. Their success is partially due to their dedication to keeping the more explicit and gory aspects of anime, rather than cutting them for North American release the way that other distributors did. One famous example is “Nausicaä of the Valley of the Wind,” which had about 22 minutes cut from its original screenplay before being shown in North America. Manga Entertainment has also been known to prefer dubbing their anime, rather than providing subtitles, though at the time of its creation, that was the standard practice.

Manga Entertainment remains responsible for the influx of animated content into Western media, and it’s all thanks to “Akira.”

Though pop culture is rife with tributes to “Akira” on a wide scale of overtness, one tribute that is never subtle is the iconic bike slide. Countless animators have paid tribute to “Akira” in the form of recreating its arguably most recognizable scene, in which Kaneda slides his bike horizontally to a halt during a fight with a rival gang. The list of animated films and shows that have replicated this iconic scene span from ”Batman: The Animated Series” in 1993, all the way to ”Miraculous: Tales of Ladybug and Cat Noir” in 2021­––and there’s a long list between them.

The impact is not restricted to just movies and television, either. Michael and Janet Jackson’s music video for “Scream” features a clip from “Akira” on a background television screen. Kanye West’s music video for “Stronger” has several references to “Akira,” and the rapper has cited the film as one of his biggest inspirations.

One scene that has been referenced recently is a shot of a billboard that advertises the 2020 Olympics, to be held in Neo-Tokyo in 147 days. Graffiti adorning the signboard reads “中止だ中止” which translates to “just cancel it.” In February 2020, preceding the actual 2020 Olympics which were, in fact, set to be held in Tokyo, #中止だ中止 trended on Twitter. Coincidentally (or intentionally), it was right about 147 days before the Olympics’ (original) scheduled start that the phrase began trending.

“Akira” has had an impact on film and pop culture as a whole in a way that can’t possibly be measured. References to it are hidden in countless pieces of media, and creatives have globally cited the film as their inspiration since its release. Whether someone recognizes it or not, their favorite shows, films and many other mediums continue to draw inspiration from the classic. Even if someone has never seen “Akira,” they’ve been exposed to its influence more than they know.

And if you haven’t seen Akira––this is your sign to watch it.