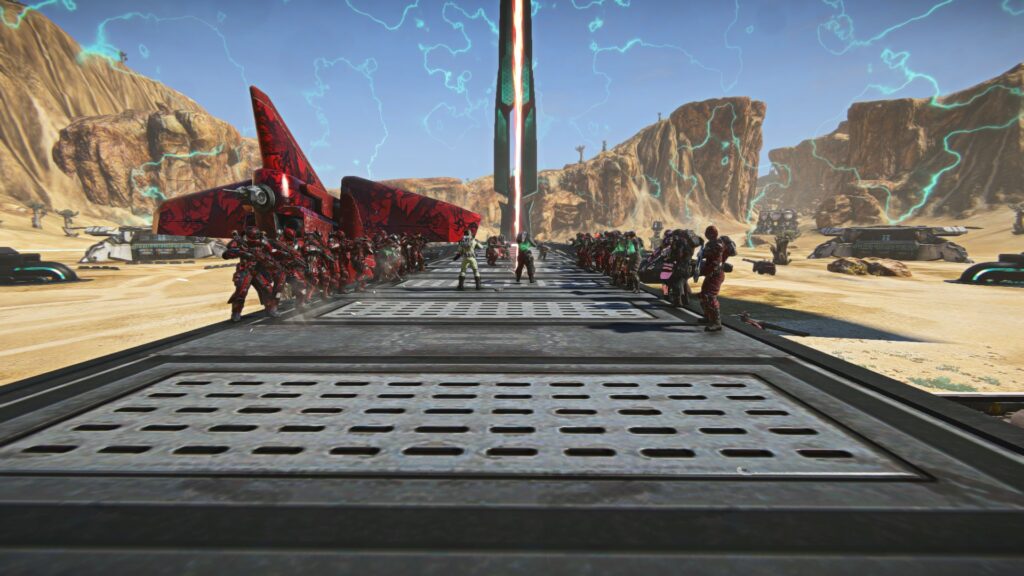 Planetside 2, a unique online first-person shooter game from Rogue Planet Games and Daybreak Game Company, is on the upswing after a recent announcement that the game will receive its first new map in seven years.

Planetside 2 is a reimagined version of Sony’s Planetside, which was played online from 2003-2016. Planetside was well-received and had a large player base but lost momentum from a lack of new content. A reboot of the game, titled Planetside 2, went live in 2012 to positive reviews from critics. “It’s senseless war, yet one that all involved are heavily invested in perpetuating because it’s so much fun to wage,” said Charles Onyett at IGN, who gave it a 9/10 rating.

Almost a decade later, Planetside 2 still maintains seven servers worldwide, two of which are for the Playstation 4. It has a free-to-play baseline and a membership option for players wanting a more exclusive experience with shorter wait times and access to a campaign.

The playing experience and lore are the same as the original game, but Planetside 2 expanded the original concept to make a larger, more cohesive online game. The end result is a large player-vs.-player game world that can appeal to any kind of gamer.

What makes Planetside 2 unique is that there aren’t many games like it. Massively Multiplayer Online First Person Shooter, or MMOFPS, is a fairly common genre; it includes Valorant, Splitgate and games in the Call of Duty franchise. But the playstyle of the Planetside games is completely original and has not yet been replicated in another game.

“Planetside 2 provides an experience unlike any other by drawing aspects from many other games, such as an MMO populous, unique and personalized progression system, dynamic role-playing, live-action firefighting and decision making, with consequences and perks for each,” said Captain JordysBacon about the mechanics of gameplay.

To gain character experience points and achieve directives or missions, players must capture points on the continent map and get enemy kills. When the points at a base are held for the allotted amount of time, the territory is captured by that faction. While there are base-capture games with similar models, none are as popular or as detailed as Planetside 2.

The three factions of the game are the Terran Republic, Vanu Sovereignty and New Conglomerate, and all have their own lore, weapons and benefits. All three fight each other to have the most territory captured at the end of a set amount of time. At the end of that time, the winners get in-game currency and XP, the continent closes, and play moves to a different continent where the same process is replicated.

In Planetside 2, users can play as infantry as well as fly aircraft, drive vehicles and construct spawn points. There are six player classes, all with unique roles, weapons and benefits. The daily missions and long-term directives support all the classes and give them unique challenges for more focused play, and all classes play a key role in combat.

There aren’t any ‘bad’ classes or vehicles to play, and the goal of the game is to use all play styles together to win as a faction. When a player dies in combat, returning to the game is as easy as respawning on the map —just a couple of clicks of a button. There’s no consequence to redeploying, which eliminates some player frustration. But there are other frustrations that can arise when enemies constantly spawn into a packed battle.

“Those hectic fights, be they infantry or tanks, are absolute chaos. There’s shit everywhere, and lots of allies and enemies, and sometimes we manage to win that fight in the end.” said a younger Terran Republic player on the Emerald (U.S. East) server. They’ve been playing Planetside 2 on-and-off for years but found a group to play with during the pandemic, and now they lead squads every week.

Combined play styles are tested annually in competitive events, which draw large coverage on Twitch and Reddit. LaneSmash and Outfit Wars are two worldwide competitions that test outfits against each other, with rewards in-game for the winners. Outfits are organized groups that players can join in-game to compete, access resources and benefits specific to team play.

Many of these outfits organize outside of the game using platforms like Discord or Teamspeak to coordinate squads of individuals to play as a focused 48-person platoon. Some of these outfits have hundreds or thousands of people in their social network and bring players together as a community. One outfit is the Second Republic Assault Force, or 2RAF, whose members play as Terran Republic characters. Some of the members of 2RAF have played the game for years but still log on every week. 2RAF enjoys bringing a sense of military roleplay and organized fun to the strategy of the game, and it’s built a strong community within the group.

DesertFox, a veteran player and leader in 2RAF, said, “Video games constantly challenge and engage our minds. As the games we play escalate in difficulty, so does life. Video games (and life) demand that we adapt and continue to develop our skills and minds.” The open-world feeling of Planetside 2 is what has kept him playing the game. He’s grateful for the ability to scale the difficulty of his play depending on what he wants from a gaming session.

2RAF is an outfit that supports all types of play, whether players are logging on for the first time and want to explore the game or are veterans looking for a high-octane squad to play in regularly. 2RAF has undergone several rebrands and leadership changes over the years, but maintains a strong ingame presence of over 600 members.

“What keeps me in 2RAF and ingame is the feeling of bringing individuals from all different backgrounds and walks of life to achieve a common goal,” DesertFox said, “whether that is successfully holding a base or dropping into the middle of an overpopulated base. What matters is what we do and accomplish as one team, one community, one 2RAF.”

Squad leader SleepyTessa said that she returned to Planetside 2 permanently because of her recruitment to 2RAF. “Planetside while in an organized squad is so enjoyable, it’s just incomparable to any other game out there right now.”

Despite its uniqueness, Planetside 2 has been seen as a dying game for years. When New World, an MMORPG from Amazon Games, came out in 2021, many community members said it would finally kill Planetside 2. Now, New World is on the downtrend as players leave due to bugs and disappointing updates, and Planetside 2 is gaining membership as players anticipate the new content release in the coming months.

Planetside’s new continent Oshur is unlike anything else in the game. All of the existing continents are land-based, while Oshur is being designed as a set of islands. Vehicles and players will have entirely new interactions with water, and it is expected to force players to develop new play styles. Some of the new content has already dropped for the membership campaign, and initial tests are being conducted on the test server to develop interactions with water mechanics.

The Oshur continent will be one of the most highly anticipated gaming drops of the year and will generate new interest in the game, as well as bring back veteran players who have taken a break from the game. An online game nearly a decade old is still running, not to mention getting new content, and that speaks to its magnetism and durability.

2RAF Captain JordysBacon has over 2,500 hours in-game and still leads organized operations every week. “With its 9-Year Anniversary, Planetside 2 once again proves its ability to withstand the test of time. However, the true heart and soul lies within the community, particularly with the outfits. Although the developers provide periodic improvements and content, the game relies on the interest and passion of it’s day-to-day players. I enjoy being a part of that experience and being able to provide a place for others to enjoy the game as much as I have in my couple thousand hours of play.”

“Planetside has endured because it is a unique experience,” said 2RAF commander ThePurpleTentacle. “There is nothing in the scope or scale of this game out there. Giving players the ability to choose: to work as a team,  run around solo, play armor or air, or construct spawns. I think also having a huge selection of weapons and upgrades offer a lot of replayability. On top of that, there are developers who are ACTIVELY putting out new content. And the players as a whole are very passionate about the game, which helps drive every engagement, fight and alert.”

With the new content update, Planetside will remain on the upswing, prolonging the game’s life for a few years longer. It’s possible that with the new update, players will go for a third world record for bodies in active combat online, and Outfit Wars is still looming on the horizon, despite no actual planned date or confirmation of format. The Planetside 2 community is awash in excitement. It’s all players can do to keep calm and keep redeploying.