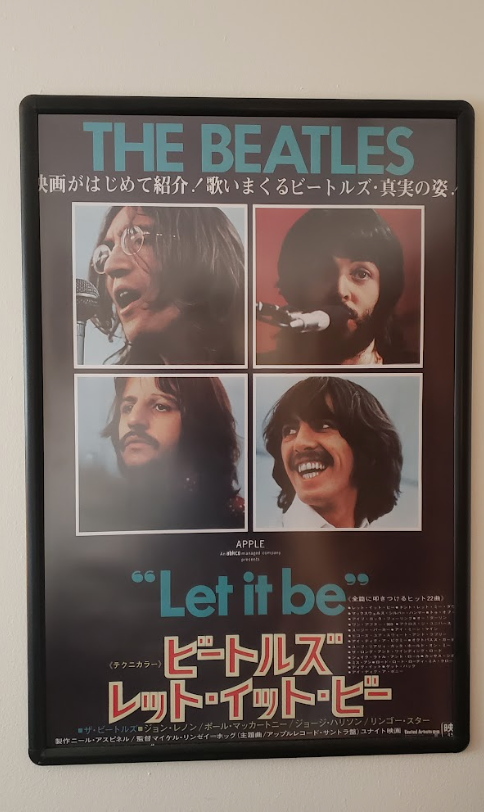 The long wait has finally come to an end for Beatles fans. The new film “The Beatles: Get Back” is now here. Many enthusiasts of The Beatles patiently awaited the film’s late release after COVID-19 slowed down production. The movie’s original release was scheduled for August 2020. With all the excitement garnered across the world for this glimpse into The Beatles’ lives, some may be disappointed by the fact that, at the time of the release of this article, fans can only watch the documentary on Disney+.

For those unacquainted with the new Beatles film, “The Beatles: Get Back” is a recut of hours of film from The Beatles in the studio in 1969. The director Peter Jackson, most known for his work directing “The Lord of the Rings,” went through the archives of footage from the Beatles at Twickenham and Apple studios in early 1969 to painstakingly produce an 8-hour documentary over three episodes.

The original film shared the title of the album “Let It Be” and was released in 1970. This film was intended to be a TV series, but due to its lengthy production and the vision of its director Michael Lindsay-Hogg, it became a movie. Of the supposed 57 hours of footage captured in 1969, only a mere hour and a half is all audiences got. Not only was the movie short, but the release was also small, having only premiered in a few theaters across the world.

Finding the original movie is difficult. A limited VHS release brought the film to home theaters, but those are very hard to find now. The rarity and exclusivity of the “Let It Be” movie left Beatles fans with a desire to instead see the band play, which was not something the Beatles did often in their later career. Prior to recording “Let It Be,” the Beatles spent most of their time in the studio, choosing not to perform live. The last time the Beatles took the stage was in 1966 at Candlestick Park in San Francisco. The band was tired of touring and hated not being able to hear themselves play due to crowds’ constant screaming.

This persuaded the Beatles to stay in the studio and record greats such as “Revolver,” “Sgt. Pepper’s Lonely Hearts Club Band,” “Magical Mystery Tour” and so on. The lack of footage of the Beatles at this time of great music is another reason why fans of The Beatles are so excited for this new documentary, which includes even more footage than the original cut. The longer length of “The Beatles: Get Back” is why it was moved to a streaming service, abandoning the original plan of a theater release.

While the increase in length is exciting, the exclusivity of the release is upsetting. Just like the limited release of the original, those without Disney+ will not be able to see the film. Even as streaming services become increasingly popular, some do not have the necessary devices, internet connections or subscription plans to watch the film. With no official DVD release announced at the time of this article, the possibility of seeing the film, for some, has quickly faded..

The film captures the comradery of the fab four as well as some drama—like George Harrison leaving the band briefly and the band disagreeing on the location of the last live show. All this is shown to audiences in high definition resolution. However, this amazing content is hidden from those who do not fork out money for Disney+. The reasoning for using this streaming platform to host the content is unclear. Netflix has over double the users of Disney+ and seems a much better home for this documentary as it currently features “McCartney 3,2,1”, a short series with Paul McCartney and Rick Rubin where they discuss the work of the Beatles.

The new docu-series is also very different from much of the content on Disney+ and the company’s brand standards. The streaming service originally wanted to censor the documentary in order to fit with the rest of their “family-friendly” content. The remaining Beatles, Paul and Ringo, did not want to censor themselves, favoring a raw, unfiltered portrayal of their band.

However, Disney+ has found success with previous documentaries and recorded performances with popular artists, such as Taylor Swift in “Folklore: The Long Pond Studio Sessions” and Billie Eilish in “Happier Than Ever: A Love Letter to Los Angeles.” Their success could contribute to the platform’s acquisition of The Beatles film.

Beyond the fact that Disney+ has fewer subscribers than Netflix, the ads they have put out for the docu-series seem to be very dramatic, showing a hero-type story that is not exactly what the new film captures.

While hours of unseen footage of the Beatles sound like it would sell itself, Disney decided to cut clips of the film together for their ad so that they are taken out of context and stir up excitement. For example, McCartney says, “The best bits of us always (have) been and always will be, is when we’re… backs against the wall.” McCartney is referring to the days when they played in the Cavern Club when he says “backs against the wall.” He even mines himself playing bass, but Disney chose instead to fabricate drama and suspense by using footage that did not match the audio.

Not only has the decision to put “The Beatles: Get Back” on Disney+ made it difficult for people to see, Disney has also put out dramatized advertisements, which misleads the audience of the documentary and creates false expectations.

This film is special. It is a must-see for not only Beatles fans, but also for people who love live music. Peter Jackson’s documentary is a truly unique view of the band’s song creation, jamming and antics. Simply put, this great piece of art should be easier to access. Hopefully, fans will soon be able to purchase “The Beatles: Get Back” on DVD so that more people can view this breath-taking footage.

Harrison Nelson is a fourth year undergraduate student with a major in professional and public writing and a minor in entrepreneurship and innovation. He has been playing guitar for twelve years and enjoys classic cars.