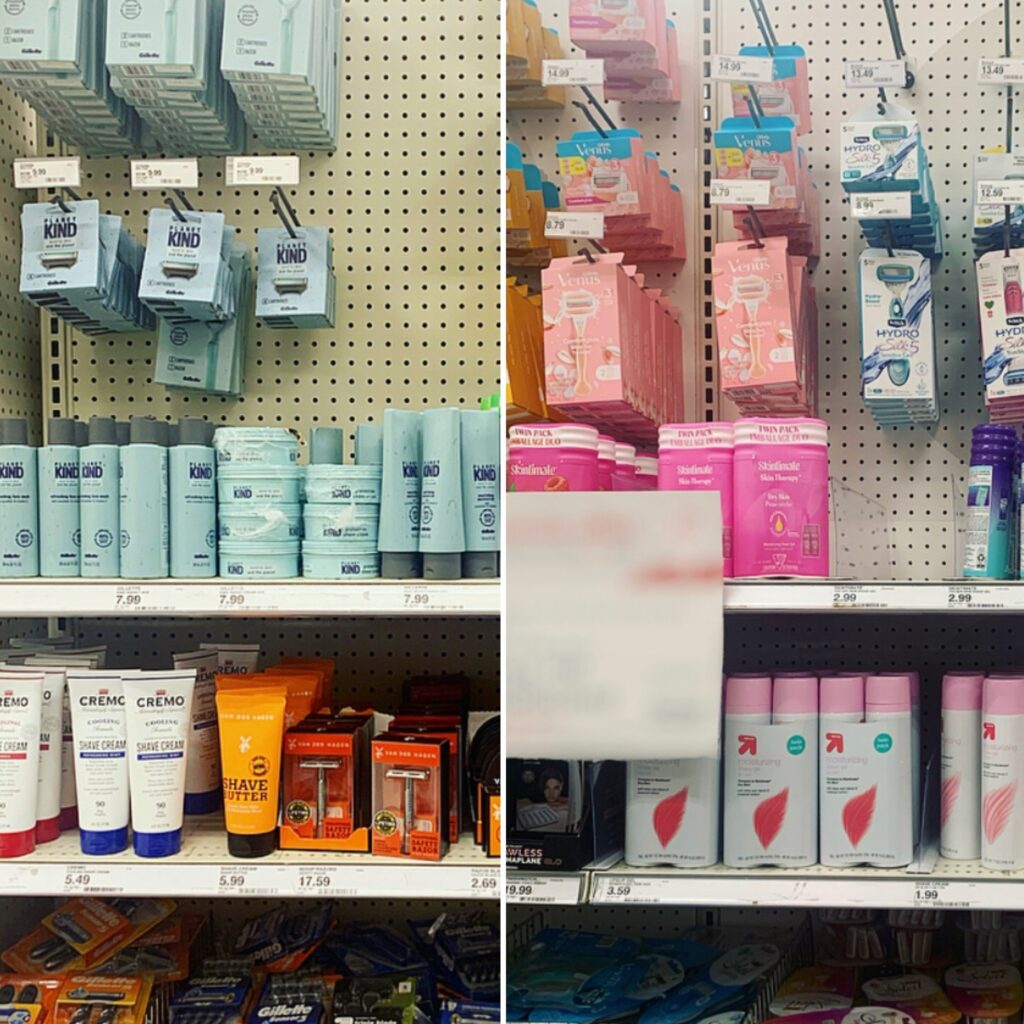 In the past few years, there has been a shift in the way society views the concepts of masculinity and femininity. The phrase “toxic masculinity,” which refers to the societal structures in place that often result in the negative behaviors and actions made by men, has become more commonly understood than ever before.

In an article for the New York Times, senior editor for The Culture, Maya Salam, defined toxic masculinity as the suppression of emotions, maintaining an appearance of hardness and using violence as an indicator of power. “Toxic masculinity is what can come of teaching boys that they can’t express emotion openly; that they have to be ‘tough all the time;’ that anything other than that makes them ‘feminine’ or weak,” Salam said.

With more attention being drawn to what toxic masculinity is and the damage it can cause, many companies have attempted to break down these behaviors in an effort to provide a safer and more inclusive environment.

In 2019, shaving company Gillette released a campaign called “The Best Men Can Be,” a spin on their original tagline, “The Best A Man Can Get.” The campaign included a commercial that broke down traditionally male behaviors and presented methods for change, such as having men challenge catcallers or breaking up brawls. Gillette then promised to donate a million dollars a year toward education to “engage male youth in discussions and activities to reinforce positive behaviors.”

Many praised Gillete for their campaign which put their earnings toward educating on the damages of toxic masculinity rather than highlighting the issue for attention. And shortly after, dozens of other companies like Durex and Always followed with campaigns that advocate for change in the way society views masculinity.

Yet, with such an effort to understand and break down what causes toxic masculinity, little to no attention was made toward understanding what it means to be feminine in western society. Society understood the pressures placed upon men to fit into a “masculine” ideal that often led to toxic behaviors and began to break them down. However, there are similar pressures placed upon women, mostly based on the need to fit an ideal standard of femininity, often leading to negative thoughts toward themselves and femininity as a concept.

“I think the role of being a woman is much more complex than being a man,” Michigan State University student Delayne Richie said. “In order to appear ladylike or feminine, you have to make sure you dress a certain way, act a certain way or smell a certain way. If you are trying to appear feminine, you can’t talk about certain things in public, like sex, menstural cyles, body image or politics. The list is endless. I think girls struggle with their femininity because they feel they are under a huge amount of pressure to behave feminine.”

In her book “The Body Politic,” Wendy Shanker said, “We don’t owe anyone an explanation when it comes to the choices we make about appearance. Yet here we are, dieting and sweating and cutting and spritzing and waxing and sucking and shooting and plucking, hoping to look less like ourselves and more like Halle Berry or Angelina Jolie or Anna Kournikova, thinking our problems will be solved.”

When flipping through a magazine, one can expect to see dozens of ads showing women using makeup to erase their imperfections or to look more beautiful. For decades, commercials have been shown on TV selling skincare products aimed to de-age and brighten skin or body wraps designed to give women a beach body. At the grocery store alone, one can see hundreds of products labeled “for women.”

So, whether explicitly taught or not, the ideals women are expected to achieve are ever-present in society. And while companies were claiming to break down the patriarchy by celebrating “the best men can be,” they failed to recognize the ways their brands and products were contributing to the misogynistic ideals forced upon women.

“I feel like I was never ‘taught’ femininity; it’s something that we all learn subconsciously,” MSU student Annie Rowbal said. “When you go to the store and see a ‘girls aisle’ and a ‘boys aisle,’ you start recognizing the differences between men and women. There was a time when I couldn’t even look at myself in the mirror if I wasn’t wearing makeup. There’s the thought that if you don’t buy these products, you won’t be feminine enough for society.”

These products perpetuate negative stereotypes of what it means to be a woman, yet companies continue to market toward women because they understand that women are the primary consumers. According to catalyst.org, women direct 83% of all consumption in the United States and in 2019 alone, women spent over $31.8 trillion globally in consumer spending.

In 1998, The Journal for Multimedia History published an article by Kathy L. Peiss, professor of American history at the University of Pennsylvania, on the history of women within consumerism. Peiss discussed the shift in the 1800s as women became the primary shoppers of the family and how companies began to market their products toward women after that.

“By the 1910s, advertisers and manufacturers had begun to see women as the ‘chief purchasing agents’ for their families, buying most of the household’s food, clothing, appliances, and other goods,” Peiss said. “The woman consumer was considered emotional and impulsive, driven by ‘inarticulate longings’ and ‘dormant desires.’ To ‘cash in on women’s sphere,’ advertisers embraced a new language of persuasion: ‘If you are selling to women, nothing succeeds like a woman’s view point.’ This strategy appeared most often in promotions for products long associated with women, such as food, fashion, and cosmetics.”

The image of consumers in America became filled with primarily women. And so, companies started to market and design their products based on women, or rather what they thought women would want. Common household items were separated by genders with half featuring feminine designs with stereotypical pink coloring and cursive fonts. Women and men’s shaving cream separated into different aisles, sometimes different sections of the store, all while being the exact same thing.

“It’s hard to find a neutral product these days,” Rowbal said. “So many products are labeled as ‘for men’ or ‘for women’ and even if they don’t explicitly say that, it is obvious by the coloring or advertising that it is geared toward one gender. As a woman who fits into the gender binary and doesn’t mind feeling feminine or owning feminine things, I like having pink products or products ‘for women.’ But I understand that not everyone’s the same as me and feels ok with these products. There should be more products that aren’t geared toward one gender or the other.”

When there are so many products supposedly designed for women, women begin to believe that product is something they need. They think, “Why would it be designed for me if I wasn’t supposed to have it?”

“These products are so normalized to me,” Richie said. “I see, mainly in makeup products, how they are geared to women and influence women to be feminine or ladylike. I think this is dangerous for women and can be very damaging because they feel the need to perform a certain way so society can view them as ‘ladylike.’ I feel like it makes women want to buy those products. They feel pressured to look a certain way because the women in these commercials look perfect, so women feel the need to also look like that so society does not judge them. ”

As a marketing strategy, companies often create problems that need to be fixed so you buy their product to fix it. But when it comes to women, the problem becomes femininity itself, and the products claim to fix insecurities they didn’t know they had, so women buy it because they think they should.

“Marketers are tasked with building brands with very limited budgets, so there’s a little bit of an incentive to categorize people in buckets so they can reach their target faster,” marketing expert Gaby Barrios said in a TED Talk. “If you think about this, it’s kind of like a shortcut. They’re using gender as a shortcut to get to their target consumer. The issue is that as logical as that argument seems, gender as a shortcut is actually not great.”

The negative effects of these gendered marketing strategies go beyond hurting brand image and can have lasting effects on the women exposed to them. These feminine branded products force women to believe they should fit into unrealistic standards. And unfortunately, this can often lead to issues like body dysmorphia or eating disorders.

“Brands both reflect and influence societal norms, and for much of our existence, our American concepts of gender have always been organized in binary terms,” Kate Snyder, strategist and head of anthropology at Instant Grass International told the American Marketing Association. “It’s precisely the brands that tend to be categorically ‘for men’ or ‘for women’ that should be more introspective about the stereotypes they’re spurning.”

Beyond the fact that these gendered items perpetuate stereotypes against women, they can actually be worse for the business marketing them.

“In this day and age, if you still blindly use a gender view for your marketing activities, it’s just plain bad business,” Barrios said. “Because gender is such an easy thing to find in the market and to target and to talk about, it actually distracts you from the fun things that could be driving growth from your brands and, at the same time, it continues to create separation around genders and perpetuate stereotypes. We have enough data to suggest that gender is not the best place to start for you to design and target your brands… unless you are working in a very gender-specific product category, probably anything else you’re hypothesizing about your consumer right now is going to be more useful than gender.”

Companies have the unique ability to influence the way people think, whether through the way they advertise products or the colors they use to design them. Often, companies end up marketing products that make women change who they are or what they look like. But, as shown by companies like Gillette, companies can use this power to create lasting change. Instead, they could lead the change toward more accurate representation of women by breaking down these sexist stereotypes ingrained with their products.

“Change is necessary because [these companies] can produce toxicity in our world and make it hard for people because they feel an enormous amount of pressure from society to act, dress, smell or appear a certain way in order to fit into the gender they identify as,” Richie said. “We need to change what it means to be feminine or masculine and focus more on a person’s personality, passions and identity. We don’t need to have these certain things for genders in order to know or understand a person’s identity.”